Landing in Berlin from a recent (and generally difficult) trip to Italy was bumpy but oddly calming. A violent storm was brewing, its intensity on a slow, fierce climb as the evening progressed. In some strange way, the scene felt, through gale-force winds and lashing rains, like a brusque reminder: “This is nichts; there’s so much left to see and to do…!”

One of those things was, mundane as it may sound, making a trip to the grocery store; I was tired but hungry, desperately craving a paprikas dip I’d come to know and love during my frequent visits to the city of late.

Supermarkets are, for me, fascinating places, for what they reveal as much for what they conceal in terms of cultural indicators. At my regular, it’s easy to find Eastern European things; paprikas-infused everything (not just dips but jarred sauce, flavoured meats, salads) are right alongside items like tabouleh, curry, tagines — items readily available in most Canadian supermarkets, especially over the last few decades. My experience of other cultures has come largely through music as well as food, and it’s nice to be able to buy harira, chana masala, fish sauce, pierogies, piri piri, and uborkasalata all in one go. Much as people may roll eyes and say it’s a silly, small thing, it isn’t for me. 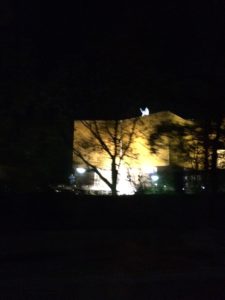 The exterior of the Philharmonie at night. (Photo: mine. Please do not reproduce without permission.)

Taking things for granted is something I’ve never been comfortable with. Distressing news from Poland recently has made me reflect carefully on my own Eastern European roots (extant on both sides of my parents’ respective backgrounds), on being a child who was raised by a culture-loving single woman in the highly unfashionable suburbs, on the role that culture plays in every aspect of my life — including its filling the many gaping holes left by absent family, chosen and not. I don’t take anything for granted; I can’t afford that luxury.

I don’t know if I would label it a luxury, but it is certainly good to have been raised without the spectre of war or obliteration. Again, that sounds obvious and silly, but for me, it isn’t. This past Saturday was Remembrance Day in Canada and Veterans Day in America, I have developed complicated feelings toward this day, mainly owing to something shared by a relative from my father’s side (who I barely knew) had shared years ago: a relative of ours perished in the Second World War, fighting, as she put it, “on the wrong side.” It has always been hard for me to know what to do with this information. Alternately, my maternal grandfather (who I didn’t know either) was an immigrant to Canada, who had been decorated for  bravery in the First World War, fighting for Britain, and later went on to be a trapper. Both my parents also have Jewish ancestors, a discovery I made through investigations years ago. It’s difficult to reconcile these various facets, never having known any of my relatives. They are all ghosts, frustratingly faceless and maddeningly nameless, dancing in and through my imagination, and I feel that dance keenly every time I’m in Berlin. 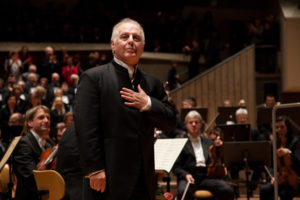 My mother let go of all her connections with my father (who had been a violinist) when they divorced, save for the one to music – the force which initially drew them together so powerfully. Daniel Barenboim, the Argentine-Israeli pianist/conductor, General Director of the Staatskapelle Berlin, and also the co-founder of the West-Eastern Divan Orchestra, who is celebrating his 75th birthday tomorrow, expressed things so well at a concert in post-Brexit Britain in July:

… if a French citizen wants to learn Goethe he must have a translation. But he doesn’t need a translation for the Beethoven symphonies. This is important. This is why music is so important. And this isolationist tendencies and nationalism in its very narrow sense, is something that is very dangerous and can only be fought with a real great accent on the education of the new generation.

I thought of these words recalling one of many special events I attended while in Berlin, American conductor James Levine leading the celebrated Staatskapelle Berlin in Mahler’s Third Symphony; it was, to quote one German media outlet, “Ein Jahrhundertkonzert” (“a concert of the century”). Levine was General Music Director and Chief Conductor at the Metropolitan Opera in NYC for 45 years, and has conducted close to 2500 performance of 85 different operas; among many accomplishments, he founded the Lindemann Young Artist Development Program, and has received a slew of awards and citations throughout his decades-long career. 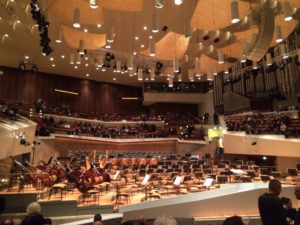 Maestro James Levine led the Staatskapelle Berlin at the Philharmonie on 31 October 2017. (Photo: mine. Please do not reproduce without permission.)

I grew up watching Maestro Levine (who is now 74 years old) conduct, both live and on TV; for me, it was part of my own education, one which continues in so many forms. I have vivid memories of the very beautiful Idomeneo Levine led at the Met last winter, to say nothing of the many times I watched him lead the Met Orchestra with my mother. It was very special to experience the work of someone whose work I’ve followed for so long, conducting at one of my favorite venues, playing the work of one of my favorite composers, in one of my favorite cities. The concert was a reminder of the special relationship between Maestros Barenboim and Levine (the former invited the latter), both of whom have worked around one another for decades. Levine, using a specially-installed ramp, led a deeply operatic rendering of the longest work in the standard symphonic repertoire, with a combination of elegant control, deliberate pacing, and a pointedly elegiac tone through even playful movements; he carefully shaped the work’s many moments of explosive intensity into something precious and wonderfully contemplative.

The five-movement work (given an intermission after its lengthy first section) gained an immense amount of thoughtfulness; this wasn’t about throwing a giant, over-filled platter in front of you, but rather, elegantly presenting small plates of delicately-curated specialties, every morsel both beautiful and tasty. Soloist/mezzo soprano Violetta Urmana and the Staatsopernchor (State opera chorus) and Kinderchor der Staatsoper (Children’s choir), together with lustrous string and horn sections, were carefully-treated ingredients, utilizing lovely legato phrasing and modulating textures. The effect was one of a whispered grandiosity. 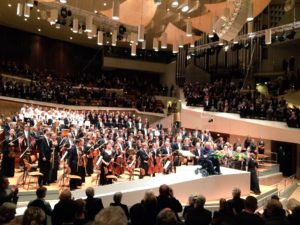 Maestro Levine at the Philharmonie. (Photo: mine. Please do not reproduce without permission.)

History didn’t impose on that particular evening, but in light of the news from Poland, as well as learning about histories I didn’t fully know and stories still unfolding, I’ve been confronting past, present, and future, in micro and macro ways; a Jewish conductor, leading the work of a Jewish composer, of an orchestra led by another Jewish conductor, would not have been welcome in Berlin a few short decades ago, and indeed, may not be welcomed by certain individuals now. Again, to quote Barenboim (from his website), “(n)ationalism is the opposite of true patriotism, and the further fostering of nationalist sentiment would be the worst case-scenario for us all.” Which Europe is supposedly being fought over, and died for? What should the role of culture be, especially in the 21st century? Is there any hope left? May I not enjoy paprikas and tagine together?

I want to say a hearty” ja” and “Na sicher” (“of course”), and remind myself of that mantra whispered amidst the lashing rains and howling winds as I landed: “This is nichts; there’s so much left to see and to do…!”