There’s something about dinosaurs that stirs human imagination. Over at my Myspace blog, I explore the connection via running into three different dino-related sites online this past week.

It’s interesting, particularly in light of a conversation I had lastnight with a performer around ideas of so-called “low” art and “high” art -what constitutes each? And are these lines vanishing? I, for one, hope so. It’s all about play, after all.

Has Oprah Seen This?

Here’s a great example of what I meant by “play” a few posts back:

I’m still searching for a way to get my Take 5 interviews into some kind of widget, so I can stick a nice little player on the side of this blog, as well as my blog over at Myspace, but in the meantime, here’s a link to interviews I’ve done recently with Erin Karpluk, Emm Gryner, Bill Nowlin, and George Stroumboulopoulos. You don’t have to listen to all of them; just choose which file you want from the list.

For those who missed Letterman lastnight…

Full rumination on Phoenix’s transition -real or not -at my Myspace blog. 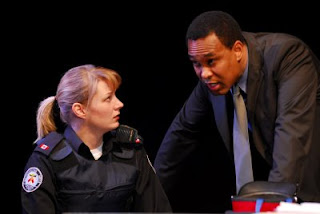 My first on-camera interview, with director/producer/actor Garry Marshall, is now up at my Myspace blog.

You Can Go With This…

The past two weeks alone, I’ve interviewed a variety of neat and interesting people (on radio morning show Take 5 in Toronto) about a myriad of topics: Erin Karpluk spoke to me about the CBC TV show she’s on (Being Erica), Emm Gryner chatted about her new album Goddess, Rounder Records co-founder Bill Nowlin talked about his company’s five-time Grammy-nominated album Raising Sand, and George Stroumboulopoulos spoke with me about One Million Acts of Green. I also did an on-camera interview with Garry Marshall about the newly-opened Happy Days musical (I’ll put a link up as soon as the video’s ready, so be patient!), which was very exciting.

Anyway, some of you will have noticed my moving away from theatre writing and reporting. There’s a reason -and it has everything to do with my inherent curiosity about the world around me. I’m branching out to explore stories that run the gamut from environmental-meets-social media (like One Million Acts of Green) to pop culture (ie -television, film, and music) to the just plain fun (like Ms. Forbes-Roberts and her fantastic fair). So in the coming days and weeks, expect to read more about my thoughts on all this stuff, and less on the performing arts. I still love ’em (deeply -I saw the COC production of Fidelio today, in fact -beautiful) but I love a lot of other things, too. The topics I pursue still have a distinctly arts-and-culture bent, as befits my own interests, but this feels like a natural progression in terms of range and breadth.

“Play” doesn’t just refer to what happens in theatres; the term also encompasses what we do in childhood, the very thing we forget moving into adulthood. It’s also the thing we all want to re-embrace, and what artists -of any discipline do (bravely) embrace. If the “play” really is “the thing,” to quote Hamlet, then Play Anon is about just that -playing, in a lot of different areas, free from the shackles of “should.”

As someone once told me (speaking about themselves) many years ago, “I may not be the smartest person in the world, but I am one of the most curious.” That describes me too. Here’s to a new day, and a new Play Anon.