Two weeks ago I was touring the lands of opera composer Giuseppe Verdi in Emilia Romagna, northern Italy: the place he was born and raised, the splendid home of his benefactor, the lush gardens he would walk through. Those were the good parts.

Any sentimentality or indeed, romanticism, which so many feel in traveling to Italy, has been largely scrubbed out; never, in all of my travels, I felt more aware of my status — my vulnerability — as a woman. While there are finger-waggers who will tut-tut with inevitable “you should haves” and well-meaning “if only you hads” (instincts I find frustratingly passive-aggressive if not outright patronizing)  I stand by the validity of my reactions, deeply aware of the various costs of singledom as a woman, the frequently taken-for-granted privilege of coupledom, and the need to accept the wildly different realities of each, particularly within the wider context of travel experiences. I got to see a part of Italy very few people get to see, a unique experience to be sure, but one that comes with a bitter recognition in realizing that my only return to the country will be as either part of a tour, or for quick excursions to very specific places, namely Teatro Comunale di Bologna, the Teatro Municipale in Reggio Emilia, and of course, Teatro alla Scala in Milan.

A rose on the property of Villa Verdi. (Photo: mine. Please do not reproduce without permission.)

In retrospect, I wonder what Verdi, a man who felt such a clear kinship with the so-called “common man,” would have made of my experiences in his country as a woman in the 21st century. Would he have been appalled, I wonder, by the cat-calls, the leering, the begging? Being a solo woman traveler opened the door to an ugly jarful of assumptions, which led to harrowing experiences: theft, harassment, manipulation, and (as was the depressingly repeated case in so many restaurants), being totally ignored. What would Verdi have made of it all? What would he have made of my wrists being grabbed by a older woman wanting money? Or waiters running to serve amorous couples but consistently ignoring my inquiries about a missing lunch and requests for another glass of Lambrusco? Or of personal items being stolen from an abode? What of the forced kissing and repeated fondling after accepting help with luggage?  What am I to make of these experiences? Are they operatic? Is it “Italy being Italy” ? Should I not be bothered? Was it my fault? Did I somehow “ask for it?” Did I deserve it because I was alone?

In any terrible situation (or series of them), there are always minuscule shards of light, and it’s these shards I have to pick through now, with the benefit of hindsight. I will always remember the free shot of espresso provided by a friendly woman in a bustling shop in Parma; the plate of sandwiches set before me in a cafe by another woman who gave me a knowing nod when she saw I was alone; the warm, expressive tone of my tour guide at Villa Verdi (the composer’s primary residence for many decades), as I struggled in my limited Italian to understand her every detail. All of us were above a certain age, all of us perhaps had some shared understanding we couldn’t articulate. I remember these moments, cherish them, and I’ve taken a friend’s advice to try and focus on good things, like these moments, and the ones provided via music and history. 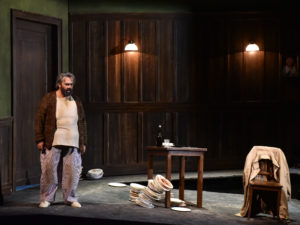 Jacopo Spirei’s Falstaff was my favorite production, and I don’t write that purely because I interviewed him about it before I left. Smart, funny, timely, and with a marvellously human lead performance by Roberto de Candia, the production (presented at the Teatro Regio di Parma as part of this year’s edition of Festival Verdi) was a true standout, and I wasn’t alone in that reaction, as chats with members of a refreshingly friendly British tour group revealed. Spirei placed the action in a familiar present, and filled the scene with very familiar people. De Candia played Falstaff as a kind of slobbish everyman, notably lacking the cutesy quality so common to characterizations. Instead, he was a kind of bar pig whom no one wanted to spend much time around — women especially; Falstaff wasn’t cuddly and harmless, he was slovenly and horrible. Only through his spectacular humiliation did he becomes semi-tolerable. The production made it abundantly clear that a character like Falstaff must be brought low in order to be raised once more, not as the phoenix, but as more of a messy pigeon who pecks around rotting porticos, and has to be kept in line with brooms and hoses every now and again. 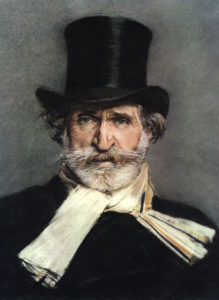 Portrait of Verdi by Giuseppe Boldini, 1866.

I thought of Sir John Falstaff when I went to Villa Verdi some days later, because, as with Spirei’s magnificent production, I was being allowed to glimpse a vivid humanity which lives beneath an image. The house is located just outside the town of Busseto, roughly 40-odd kilometres north of Parma. Verdi supervised its construction, and, together with lady love (and soprano) Giuseppina Streponi, moved in in 1851. The house contains a number of mementos, as one might expect, all carefully and lovingly displayed.

Observing the bed in which Verdi died in 1901 (which had been shipped from the Grand Hotel in Milan) and various personal effects (including letters, knick-knacks, and the top hat and scarf he wears in Boldini’s famous portrait), a portrait of a good man dedicated to music and the people he loved emerges. It sounds hokey, but somehow, it wasn’t — but it was odd to walk around the living quarters of someone whose music was the soundtrack of large swaths of my life, to say nothing of my mother’s; it was ordinary and yet not, simple and yet grand, intimate and epic, all at once. Two pianos on which Verdi composed his works (early and later) were there, a clear case covering their keys. I stared at those pianos, longing to touch them. (No photos are allowed inside the house, alas.) I couldn’t rip my eyes off the second instrument on which he had composed Aida; this epic of the opera world, this contentious, difficult piece, with clashing ideologies and a gorgeously intimate subtext about loving the wrong person in the wrong time, “Celeste Aida” and the so-called “Triumphal March” — all that was done on the simple, upright piano sitting before me.

Gelling those reactions with the personal effects (to say nothing of the little section on Wagner) was surreal but also beautiful. I wish I could have had a few moments to stand in that room and take it all in, quietly, thoughtfully; it was one of the rare times during my travels in Italy that I actually wanted to be alone.

The exterior of Villa Verdi. (Photo: mine. Please do not reproduce without permission.)

A more fulsome piece about my visit to Villa Verdi and the town of Busseto is set to appear in a future edition of  Opera Canada magazine, but at this website, expect a piece (soon) about a very unique version of Die Zauberflöte (The Magic Flute) presented in Reggio Emilia, which featured members of the Berlin Philharmonic and Italian entertainer Elio. Mozart’s opera has been on my mind a lot lately, because it is, as Komische Oper head honcho Barry Kosky rightly has noted, a work infused with a deep loneliness, and that quality is one which haunted me throughout Italy. Perhaps it was the absence of my mother, the social isolation that comes with being an independent woman of certain means, an overall disappointment… whatever the case: I am happy to have seen and experienced the things I did in Italy — and it will take a lot to get me to return.