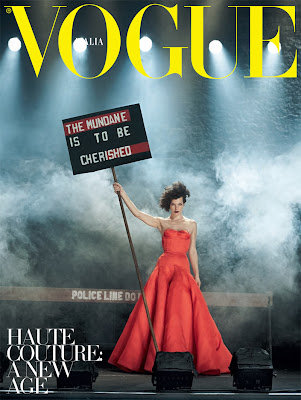 On any given day, I’ll plug a series of favorite tags into Tumblr to see what come up. I’m curious to see if there’s anything new, inspiring, or interesting about my favorite topics or people. Something that catches my eye might get a “like” or even a reblog. Tumblr has a pleasing immediacy of visual experience that’s utterly lacking in strict classification (unlike Pinterest), which makes it somehow more visceral and pleasingly jolting than other platforms (if also occasionally challenge to post to – you’re never sure just what’ll blow up, or why). Tonight I plugged in the name of a longtime favorite artist, just to see what came up. I wasn’t prepared for the result.

Jenny Holzer, it appears, has gone high-fashion. Her truisms are appearing in Vogue Italia alongside model/singer/actor Milla Jovovich, carefully posed and poised in a variety of high-end settings. Is this to coincide with the release of Resident Evil: Retribution? Is it making a political point? Is it trying to bridge the worlds of high fashion and art (not that they need help)? My initial reaction was deeply unsettled; I felt dismayed Holzer would sell her talent out to an industry that is so reliant on the ephemeral, the superficial, the temporal and the boringly inauthentic. Her art has always struck me as the precise opposite of those qualities; real, deep, fierce, and deeply, sarcastically challenging of the expected norm, it also possesses a deeply feminist quality that separates it from many other contemporary artworks. Holzer’s work is ferociously female and isn’t afraid to express that through her art, while retaining her sense of being a human being -and human creator- first and foremost. (For an interesting corollary -and contrast – check the work of Cindy Sherman, who recently collaborated with M.A.C.) And there’s something awfully disconcerting about seeing Holzer’s snippy, snide truisms stuck beside super-pricey, high-end frocks most people will never wear, much less be able to afford. What the hell is someone as smart as Holzer doing in the flaky, flimsy, aesthetically-obsessed, surface-worshipping world of high fashion? And why would it be with someone who’s known for being very pretty, but doing very little, outside of (wildly successful, if deeply lowbrow) zombie movies (and games), oodles of posing, a very mediocre album (yes, some of us bought it), and a mysterious Oscar appearance? Why Jenny, why? I’m sure my snobbery’s showing at this point, but… c’est la vie. 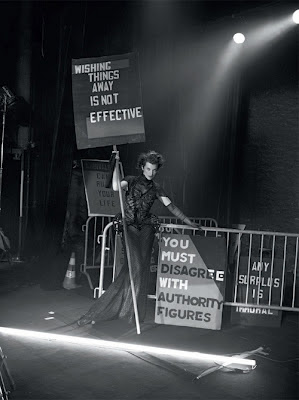 In re-examining these images now, an hour or so later, I find myself intrigued, challenged, confused -and rather enjoying that mix of feelings. (Also, Peter Lindbergh’s photography work is truly gorgeous.) I recently told a friend, after she’d viewed the work of Egon Schiele in-person and found it “upsetting,” that art shouldn’t be about making one comfortable, that art isn’t about reassurance, or validating our world view; it’s frequently about riling up feelings of discomfort and challenging our smug, too-cozy preconceptions. I wrote this to her last week, and now I’m being confronted with that very experience. Karma, irony, just-desserts, call it what you will… but I’m glad I plugged Holzer’s name into Tumblr tonight. Maybe it’s about creating a strong contrast – between all that high-end frockery and the raw realness of Holzer’s art. Maybe it’s about confronting women like me with our pre-conceived ideas relating to art, fashion, self-image, and empowerment. Maybe, amidst the shallow parade of lights and finery, there’s some fierce depth going on.

Lesson? Not all art will conform to my definitions and world view -to my experience of being a woman, of being a writer, a culture vulture, a human being -and perhaps some of it -especially the work of favorite artists -shouldn’t.

Thanks for the confusion, Jenny. Thinking too much can only cause problems. 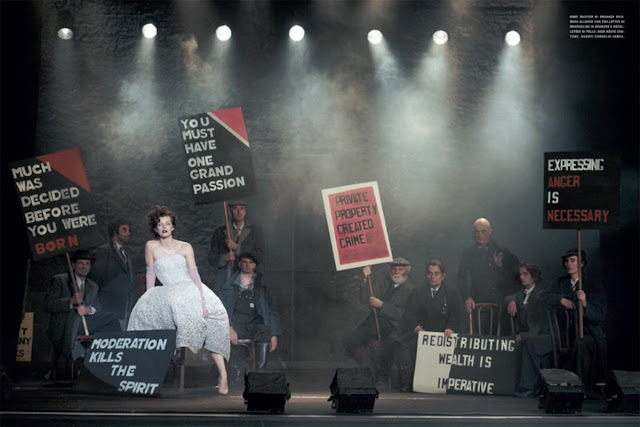 (Note: Title of this blog post is also a Holzer trusim!)