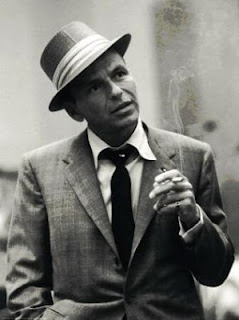 Do you use Instagram? Do you love it? Hate it?

There’s been a lot of talk about the mobile app recently. A reporter friend sung its wonders last summer; her prescient enthusiasm anticipated Instagram’s huge dent in public consciousness over the last few months.  The mobile app was bought by Facebook for a big price tag; it was the subject of Jon Stewart’s acerbic wit; it’s been featured on the PBS Idea Channel (above); it’s inspired a snarky (and very funny) parody video of its features; it’s even made the pages of the Grey Old Lady. Oh, and  I recently did a feature on a prolific (and dedicated) IG user. What’s the big deal?

Part of it seems to be the temporal nature of the app; it captures moments within a certain frame of time, with  filters reflecting users’ moods and visual ideas around events. It’s temporal, with a leaning toward the personal, taking the best bits of social media and putting them within a visual interface. Thus, it’s become a beautiful complement to reporters’ toolkits. For evidence, check out WSJ’s impressive collection of Occupy Wall Street Instagram shots. Photojournalist Richard Koci Hernandez sees it as a game-changer. It was used for New York Fashion Week. Plenty of people – journalists and non-journalists alike – use it as a kind of blogging shorthand for what they see around them. Plenty don’t, however, and in a neat twist of irony, they’ve used other social media outlets (particularly Twitter) to air their displeasure. Is Instagram a threat to traditional photojournalists? To journalists overall?

The line between reporting and art feels perilously thin when considering the  potential of the app. I happen to like it for on-the-go shots of my daily life, though I’m careful to avoid the “this is what I ate  for breakfast” mundanity that seems to dominate so much social media photo-sharing. As a former photographer who worked in (and occasionally misses) film, I find Instagram’s range of “vintage” filters more amusing than annoying. Still, there’s something to be said for the tactile, and more than once, I’ve found myself drawing (or wanting to draw) some of the shots I come across on my daily Instagram look-throughs. Perhaps that’s the basic beauty of the app: it embraces the sharp, thorny terrain of the present, while snuggling with the soft, messy sheets of yesteryear. It’s Now, and Then, and Maybe, all at once. 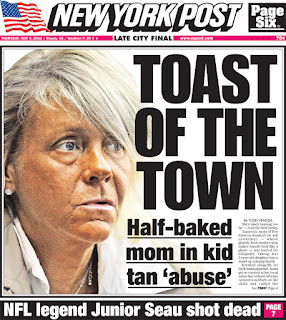 From the Facebook page of WNYC’s excellent music program Soundcheck:

Weird, yet fascinating prototype in which users cook and shape their own jelly … and make music with it. Believe it or not, neither Jell-O nor pitchman Bill Cosby are involved with this. It comes from, yes, France.

They were so heavily sampled that they actually titled an EP, Sample Credits Don’t Pay Our Bills.

They opened for The Yeah Yeah Yeahs and their work’s been sampled by acts like TLC, The Beastie Boys, Tricky, and Wu-Tang Clan. Pretty impressive for a group of sisters from the Bronx.

I love them because of their blend of old-school and new-school approach; they use traditional instruments (bongos, guitars, bass) to produce a futuristic, near-electronic sound that reminds me of Krautrockers like Can and Kraftwerk. ESG were able to produce some very atmospheric sounds with a mix of minimal melodics and maximum rhythm, capturing the magical madness of New York City like so many before and after.

Go if you can. Thank me later. 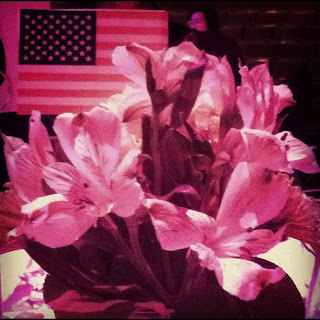 It was an interesting experience, to sit on the stage of Markham Theatre today, eating lunch with various town luminaries and performers, learning about its 2012-2013 season and noting who was using a smartphone and who wasn’t. I couldn’t help but take pictures. Each table boasted a flag representing the nationality of upcoming performers; ironically or not, I’d been seated at the table boasting the American flag. The moment was a strange fusion of old and new loves.

I last performed on that stage in 1997, in Carol Shields’ Departures And Arrivals, donning a variety of roles and costumes. Though drama was an absolute passion back then (nay, a career path), I clearly remember that dreaded gremlin, stage fright, taking a firm icy grip during a monologue I had toward the end of the play on opening night. For a few awful seconds, I blanked out. It was mortifying.

Today, I looked down at the seats family and friends had occupied that night, and a flood of gratitude and relief washed over me. Gratitude at the patience of good people, and relief at changing my career trajectory after many bumps and false starts. Sometimes, it’s good to step out of the spotlight.

This desire for privacy coincides with a dawning reluctance over the past months at revealing too much personal information on here, and on other online spots. That may be owing to the fact that I’m moving deeper into the professional journo-world, and don’t care to splash around personal details, or it may be a distaste for over-sharing, a trend that doesn’t seem likely to wane in internet culture, where “heels and meals,” as a recent interviewee put it, rule the day. I don’t hate the trend; I just don’t happen to think I fit into it – and truth be told, don’t want to. I’d rather people get a small taste of me through my writing (and choice of coverage), but enjoy a full meal when they meet me in-person. I’m an unabashed sensualist at the end of the day, and I’d sooner meet someone over a glass of wine, if it’s possible; I’m fully cognizant that isn’t always possible, but when I’m out in the world, there’s always a new person to meet, always a new conversation to be had. I don’t want to miss those moments.

Right now I’m reconsidering the purpose of this blog, and am thinking of making it a space more for short, punchy observations – artistic, political, social, cultural – and for inviting more active commentary and feedback. Yes, I’m still going to keep my newsy (/sassy) Tumblr blog, and I’m active on Twitter and Facebook too – but really, I want readers to go to Digital Journal to read my formal work. I hope that isn’t too much to ask. It’s time for me to step off the proverbial stage of personal blogging, and move into the backstage realm, and, we hope, on to after-party to mix and mingle. The diva has exited the stage; she’s still around, though, if you want to look for her.