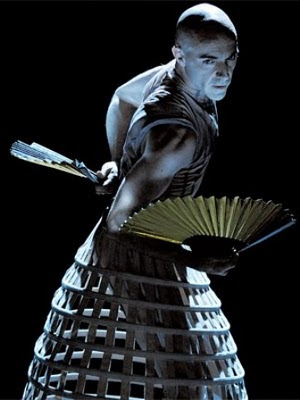 “Onnagata” is a Japanese term used in kabuki theatre that refers to a male performer who would play the female role in a work. In the upcoming Eonnagata, a production created by theatre master Robert Lepage along with dancer Sylvie Guillem and choreographer Russell Maliphant, it becomes a metaphor for the exploration of gender, identity and finding one’s place in the world. Lepage uses the 18th century figure of Charles De Beaumont, who worked in the court of Louis XV a a diplomat and spy. Beaumont, known as the Chevalier d’Eon, was a skilled swordsman, and would don female clothing for his spy missions. At the time of Louis’s death in 1774, he was living in exile in London, but was allowed back to France three years later, where he lived as a woman. Even after his (her?) death in 1810, d’Eon’s gender remained a source of debate, though post mortems confirmed Beaumont was anatomically male. Not that genitals should be a pre-determining factor in one’s predilection toward frocks. Just ask Eddie Izzard, after all.

The sense of playfulness and provocation that figured so much in d’Eon’s life seems to have seeped into Eonnnagata, with Lepage blending his keen sense of grand theatricality with Maliphant’s muscular choreography and Guillem’s beautiful dance stylings. The 90-minute piece was produced in 2009 at Sadler’s Wells in London and runs here in Toronto for a quick two-night-run starting tomorrow at the newly-refurbished Sony Centre.

At a recent press conference, Lepage sat like an excited parent, with an elegant Guillem and a serious-looking Maliphant both couched to his right, and the director of Sadler’s Wells to his left. Between snatches of French (pour les journalistes Quebecois) and plenty of smiles, Lepage explained the whys and wherefores of choosing Beaumont as the subject of exploration. His answers were long but fascinating, showing a complete passion for the subject matter as well as its presentation. The Chevalier was “a playful character “, a quality that, one realizes, could just as easily apply to the international theatre artist himself. adding that Beaumont’s life “(has) things to say about …our own lives and energies” as well as “how you deal with the idea of identity, not just gender or sexuality” -but the issue of nationality. 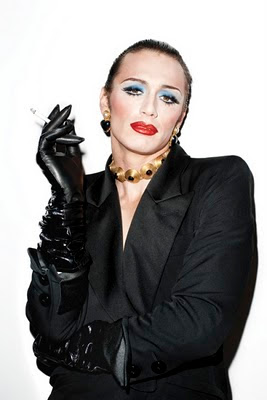 The idea of drawing a base identity from gender is one that’s always fascinated me. How does genitalia dictate life choices? Professional choices? Sexual choices? Codes of conduct? Codes of behaviour? Even now, three hundred-plus years after d’Eon has passed, we’re still grappling with this notion, even as we both embrace and revile those who might question the strict rules that govern our ideas around what men and women “should” and “should not” do/ look like / react / choose / play / entertain / act in the world (see last post re: female aggression). I can’t help but think of Patti Smith yowling out “Gloria and posing on the cover of Horses, and the accusations of her being gay that floated around. Similarly, I can recall when Annie Lennox donned a brush cut and a suit for the “Sweet Dreams” video back in the early 80s, with the same (stupid/unfair/ignorant) comment being made about her (and me, because I was a huge fan & wound up emulating my heroine by wearing men’s suits for a time, and yes, eventually chopped my hair off too). Nowadays, Antony Hegarty patently skirts the issue of gender (pardon the pun), as rumours about Gaga being a hermaphrodite and good-grief-is-James-Franco-gay?!-isms float about. Despite refreshing attitudes in some quarters, I can’t help but smirk: we just have to label, define, know… don’t we? Arrgh. 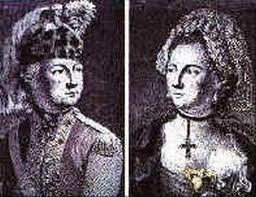 Charles de Beaumont, or d’Eon as he was called, didn’t think anyone had to know. He did just as s/he pleased, living a stuffed-full life filled with adventure, tragedy, and more than its fair share of political intrigue. He moved between France and England throughout his/her life, and negotiated important historic/political moments (including handing Canada over to England, natch). A sense of self-assured fluidity pervaded everything the Chevalier touched. Such uncommon magic finds its modern equivalent in an artist like Lepage, who, French-Canadian, gay, internationally-sought, multi-lingual, multi-disciplined, and perpetually costumed (he wears wigs after a childhood case of alopecia), has that same embrace of transformation and changeability. His sizable body of work has taken him between continents and cultures for over three decades; from Canada to the U.S. to Europe to the Far East and back, the Quebec-based Lepage is a man in demand. He’s recently directed opera – the Metropolitan Opera Company’s production of Wagner’s massive Ring cycle (Das Rheingold opened the Met’s season earlier this autumn), the COC’s The Nightingale -and created lauded works like the sprawling, nine-hour Lipsynch (part of last year’s Luminato Festival) as well as The Andersen Project (recently produced by the Canadian Stage Company), among many, many more. I’ve always loved the sense of imagination that is so strikingly present in all of his work; you may not come out of a Lepage production completely soothed, but you will certainly come out stimulated, your eyes full of intriguing images, your head swimming with words, your heart bursting with the moving energy of live performance. 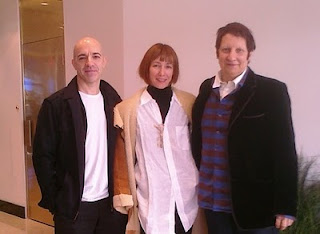 Performing isn’t something Lepage has done a lot of recently. With Eonnagata, he’s returning to the stage, attempting to get away from the yoke of verbal expression he feels has dominated his work. “When I started my work twenty, thirty-some years ago, I was much more physical than verbal, but in time I became way too talkative. Blahblahblah. A lot of physical explorations (were) pushed aside. (Eonnagata) was a good opportunity for me to shut up! I do speak a little bit, but it was good to go back to something I wasn’t necessarily trained. It’s more organic.” I think he hit the nail on the head on why I’ve returned to drawing and painting. There’ something much more raw and primal about movement, pure sound, pure light, and pure… experience.

Russell Maliphant echoed Lepage’s sense of liberation in terms of working on something outside his area of expertise. “Sometimes those things demand something of you, “he explained, “something you haven’t practiced before, and it’s a new challenge as a performer. I haven’t worked with props before, and there’s a variety of props in this. I haven’t done any singing before. I haven’t spoken onstage for twenty-something years, so in all those things, they’re very… challenging and interesting to go to as a performer. They demand you go to a place you wouldn’t go to if you were working in your comfort zone. That’s inspiring.” 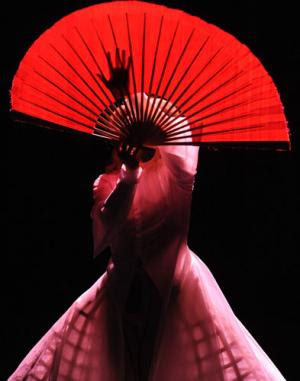 Sylvie, looking like a Parisienne version of Anna Wintour sans the sunglasses and frowning, agreed with this sentiment. She was interested in what she called the “theatrical” possibilities inherent in combining the life of a fascinating figure with Japanese theatrical tradition; that sense of exploration extended to the costumes in the show, done by the late, great Alexander McQueen. “I didn’t know (him),” she said wistfully, “but I knew his work, and I could see his crazy poetic imagination. I felt he was the right kind of person to do it.”

Over the course of their first meeting with the British designer, the team introduced the project and their vision of integrating dance, music, and live performance with kabuki theatre. By the second meeting, Guillem say “he understood completely what it was, but he said one thing: ‘If I do it, I want my costumes to be part of the show. I don’t want to be just dressing, I want to be part of the story, part of what you do, part of the character and who he is.'”

Commenting on the finished product, Sylvie’s delicate features lit up. “(McQueen) had poetry, refinement… it’s just what we needed.” If only he had lived to see it!, I wanted to shriek. There’s something about the fluidity of d’Eon’s life, his easy movement between the world of the high court and the streets, his courting of controversy, his dedication to living his life according to his own mores and the price he paid for his choices that I suspect the British designer liked. This, combined with the strong poetic theatricality of three supreme artists like LePage, Guillem, and Maliphant, and … well, McQueen would (does) fit right in. And yet, his untimely end implies he never gave a thought to any kind of legacy. Again, there’s a parallel with Lepage.

“I’ve never considered myself a master,” he said carefully. “I’ve always been very thirsty for learning new things. Certainly this experience with amazing artists is part of my learning process, I’m not somebody who looks back at the past too much… I’m always interested in what’s the next challenge,where I can go, what can push me off track to find a new path. If there’s no putting yourself in danger, it’s not worth it.”