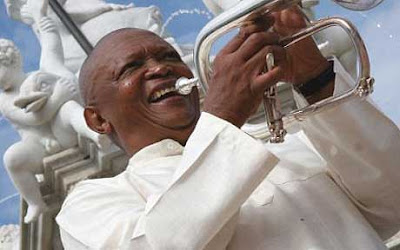 Music has played a large role in my life lately. In the weeks leading up to the Grinderman show last week, I interviewed Laila Biali, Micah Barnes, and James Di Salvio (Bran Van 3000) about their respective new releases, received the new album from the fabulously-rockin’ Preachers Son, and have been diving headfirst into the work of recently-deceased composer Henryk Gorecki. I’m also been looking into attending more live shows, trying to get more familiar with the massive Sondheim catalogue, and preparing for the Einsturzende Neubaten concerts here in Toronto next month.

Amidst all of this, the gorgeous, babbling trumpet of Hugh Masekela has been reigning like some supreme being, dancing and swirling with magical silvery notes and the soft-sheen of hand-claps and rising voices. Masekela’s music is rich but spacious at the same time, and he gives a show like no other; his warm smile and funky dance moves leaves a trail of inspiration, and I think I can say with some confidence now that seeing him here a few weeks back marked the beginning of my musical renaissance of late.

It was a miserable Saturday night when Masekela came to Toronto to complete his latest North American tour. Cold rain fell hard and noisy across the concrete slabs and high scaffolding dotting the city-scape. Crowds huddled together under the tiny awnings outside restaurants and shops, barely daring the wind and the wet, and I arrived at Koerner Hall with pant legs soaked and in a slightly chilly mood. The new space put me somewhat at ease, though. The architecture is so… pretty, all glass angles and soft colours and grand open spaces. The hall has been creatively fused with the rambling old architecture of the old Royal Conservatory building, a place I shuddered to enter as a child. 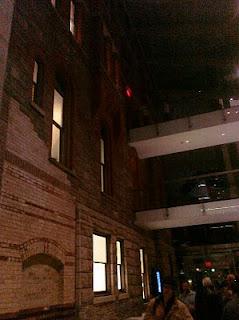 It was in the fusty old Conservatory building that I would take my dreaded yearly piano exams, and it’s there I have an ashen collection of singed musical memories. Between the glaring, smile-adverse examiners, the creaky floors, the yellowed keys of ancient pianos, and the sheer terror of waiting outside a closed door as piano-playing way, way better than mine emanated from within, it’s a spot I was convinced I’d always despise. It’s no exaggeration to state that the Conservatory system pounded out whatever sonic creativity I had in favour of more rigorous, “proper” sounds. Stop fooling around, play what’s in front of you, technique over emotion, no improvising allowed, ever. Don’t do that to Bach/Beethoven/unheard-of-people-I-didn’t-give-a-toss-about-anyway! Hardly worth mentioning: I don’t play the piano anymore.

The building itself, which I remember as a fusty, cold, old space, has been fused with something warmly modern and welcoming; the regal (if equally cozy) Koerner Hall has top acoustics, comfy seats, and a nice smattering of old instruments in the basement, museum-style. Along with featuring Masekela that particular night, the Hall also hosts classical concerts (duh) a well as local groups like the excellent Art of Time Ensemble. Next year’s lineup includes jazz, Indian sounds, and blues shows. That eclecticism is a great reflection of not only the city, but the approach the Royal Conservatory is now taking to shape the nature of cultural experience in the 21st century. It’s not all poe-faced, serious, miserable, head-down-and-shut-up-ness stuff. Gosh, I almost wish I was playing piano again. Almost. 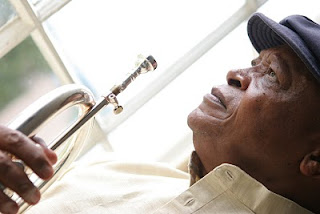 So what to say about Masekela? The term “legendary musician” feels incredibly trite for someone so multi-talented. Human rights crusader, politician, artistic ambassador, showman, loverman… where to begin? With a mellow touch, of course. Hugh and his five-man band gave one of the most beautiful concerts I’ve ever seen. Liberally mixing old and new favorites, Masekela proved himself a master of many sounds and emotions, from the sexy growls of his famous trumpet to yowling imitations of a steam whistle, and even to his funky dancing, Masekela proved he’s a supreme entertainer and musician of the highest order.

With the accompaniment of a strong, intuitive five-man band, Masekela worked the crowd with a gentle wit and highly watchable style. He took the time to include Toronto in his roll-call of cities in “The Boy Is Doin’ It”, and chatted to the audience with much familiarity and warmth, easily blending humour and politics. Between quick comments on the rainy weather (which seemed, to my ears, to be a chide to the numerous latecomers) and amusing references to the G20 debacles of earlier this year (“I hope we’re safe here?”), Masekela appeal to the collective conscience of his spellbound audience, wondering aloud if the natural calamities of this year were the result of the Mother Nature taking revenge against an ignorant populace. He then spoke about the history of “Stimela (Steam Train)”, how it referenced South African coal mines, and how the numerous troubles of his home continent require the world’s attention.

“Stimela” is a powerful evocation of time, place, and circumstance, and its live version was a wholly moving blend of sound effects, native South African rhythms and … frankly, rock and roll. I couldn’t help but think of how much the middle instrumental section resembled various favorite rock tunes (especially favorite live tunes), and I marveled at this spry, funny, smart, accomplished 71-year-old for being able to channel so many different energies and styles simultaneously, via his innate, if finely-honed ability to integrate dance, voice, and presence. 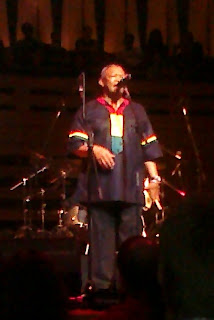 But perhaps that’s the special magic of Hugh Masekela. The second half of the program was chalk-full of fun, upbeat numbers, which inspired much dancing of the onlookers in the cheapie seats, located directly behind the stage. There was something wholly encouraging about watching the skinny-tied/ironically-bearded/thick-framed-glasses hipster set sway, swivel, and shake to the earthy, sexy sounds of “Happy Mama” and the famous “Grazin’ in the Grass” (which he played at the 2010 FIFA World Cup). Music makes the people come together indeed. Masekela and his band acknowledged the dancers as well as the numerous audience members familiar with his numerous references to South African culture. During “Kauleza” Masekela instructed us to call back the song’s title (which translates to “Police!”), noting it was what he and his siblings would shout growing up in illegal drinking establishments. “You’re not shouting loud enough!” he chided, “The police are coming!” My favorite moment was during the legendary Fela Kuti song “Lady”, when Masekela imitated a haughty woman, shaking his hips, pursing his lips, cocking an eyebrow. It was a hilarious, playful blend of satire and musical mastery, and completely spellbinding.

Indeed, the whole evening seemed to be a balm to soothe my awful Conservatory memories. Musicality takes all kinds of forms, of course, but it’s hard to flush bad energies away in one go. Attending Masekela’s concert in my old horror-movie stomping grounds felt like a good first step toward creative musical rehab. 2011 could be the year of Koerner Hall, both for me and many others seeking the kind of inspiration -and liberation -only music can provide.