It was predicted, and it came true: I’m in definite withdrawl from the amazing experience of seeing Grinderman last week. A mad mix of shrieking guitars, creaky violin, ear-splitting feedback, thudding bass, crashing drums & scratchy cymbals (oh, and one very booming baritone) has invaded my aural -and spiritual -space. It’s been perfect in terms of creative inspiration, but has totally stymied the more mundane aspects of Good And Proper Adult Responsibility. Oh dear. 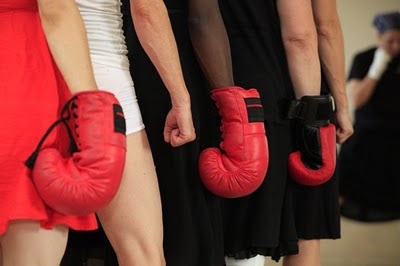 Along with getting retweeted by the band’s amazing Twitter team and looking up every single live clip I can find online, I’ve been thinking a lot about women in rock and roll. It’s no accident that this fascination coincides with my diving head-first into the work of Patti Smith. Years ago I remember music-mad broadcaster George Stroumboulopoulos wisely observating that if Patti had been born male, she’d be as well-known as Bob Dylan and Bruce Springsteen (and, I might add, just as comfortably rich too). I think about all the crap (some deserved) Courtney Love has endured, despite the fact she’s put out some incredibly good stuff. I remember the great shows L7 used to give back in the early 90s, and how people I knew sneered and thought they were vulgar. I remember bopping along to Joan Jett and the Blackhearts as a kid and being accused of being “butch.” I enjoy all these artists as much as I enjoy Soundgarden, Led Zeppelin, and yep, Grinderman. Seeing them last week, I really have been wondering: where are the women doing this? why aren’t they being promoted? Why aren’t little girls who rock out being encouraged to… well, rock out? Somehow it feels like it goes against the image of what everyone thinks girls should do. Wear pink, like Barbies, wear makeup, and eventually, don heels. Why can’t we do all that AND rock out? (Or not do any of it but still like boys, drinks, and the rock music?) What’s the role of aggression and creativity -especially when you happen to have boobs?

It’s always been my opinion (based on direct experience) that the world doesn’t take very well to aggressive women: “butch”, “dyke”, “trashy”, “nuts”, even the eponymous “bitch” all get thrown at those women. Toronto’s urbanvessel theatre company wanted to take a closer look at this idea of women and aggression. Their show, Voice Box, was produced this past weekend in association with the city’s Harbourfront Centre (a big arts complex on the edge of Lake Ontario), and it integrates boxing with theatre and music. From the very first notice I got of this show, I was curious about the hows and whys. I interviewed Voice Box’s whip-smart writer, Anna Chatterton, at CIUT just before the show’s opening to get her insights into popular perceptions around female aggression, and how they relate to the art of getting in the ring. 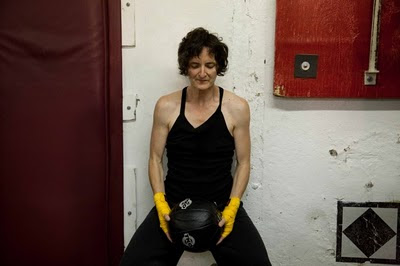 Alas, I’m no closer to solving the riddle of why women aren’t making the kind of balls-out, kick-ass music that puts my stomach in knots and makes my blood do aerobics in my veins. But then, I suppose, there’s another argument that, if I enjoy it (like so many women do), that’s enough. But is it? Hmmm. Pop music has its fair share of male-female ratios in terms of performers (their presentation and marketing is a whole separate argument); why not rock and roll?

Dear Grinderman, please think about having Patti sing a number with you. I can hardly wait for her version of “No Pussy Blues”.