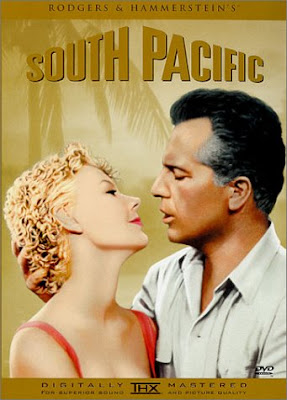 What surprised me most about attending the Toronto opening of South Pacific recently wasn’t the smart Bartlett Sher direction, the hot dancing sailors, or the strong, ballsy singing. No, it was the fact that so many people I met and spoke with hadn’t seen either the film or any other stage productions. Just like me! Here I thought I was the only SP virgin in the audience. Guess not.

South Pacific belongs, at least to my mind, to another time and place -one where everyone had a crush on either Mitzi Gaynor or Rossano Brazzi, the stars of the 1958 film version of the beloved Rodgers and Hammstein musical. The story, set on a tropical island during the Second World War, revolves around Ensign Nelly Forbush (Carmen Cusack) and her relationship with Frenchman Emile DeBecque (Jason Howard). Nelly’s all fine and dandy canoodling with a man she hardly knows, until he introduces his Polynesian children to her, and she figures out he’s been with a “coloured.” Remember this musical is set during the 1940s, before MLK and the civil rights movement proper existed, and the ugly spectre of racism was still haunting every part of society.

Dated and yet weirdly timely in its attitudes and portrait of a closed, hypocritical paradise, Sher’s multi-award-winning Lincoln Center production has kept every ounce of James Michener‘s intoxicating, if occasionally uneasy atmosphere from his Tales of The South Pacific collection. There’s romance, there’s boredom, there’s a dangerous restlessness, and the huckster-slickness of island trade. There’s also latent, if noticeable racism; for instance, the black navymen stand apart from their white counterparts in most scenes, even when they’re dancing and singing. This is no never-never-land where supposed “difference” is ever forgotten. Never for one moment does Sher let us forget this is a very segregated, racist society singing those cutesy, toe-tapping songs.

It’s also, at least to my twenty-first century feminist mind, staged to be vaguely chauvinistic -quite purposely. The hummable, weirdly addictive number “There Is Nothing Like A Dame” is sung by the gaggle of bored, restless navy boys, with heavy legs and wide gaits, like they all have the worst case of blue balls in history. The way they shout and enunciate their lines (particularly the pelvic-thrust-inducing “ANYTHING like … a dame!“) is both smirk-inducing and slightly disturbing. I got the feeling watching them that I wouldn’t want to be stuck in a tiki bar near any of them. Sher’s desire to portray, honestly and without the cute, coddling frills, the sort of wild loneliness that’s endemic to military life -a loneliness that transforms into predatory, dangerous energy in such isolated, testosterone-fueled circumstances. You have to wonder what those soldiers would do if they all got to the island that’s across the bay. At the same time, you can’t blame the French Polynesians for locking their daughters away. Yikes. 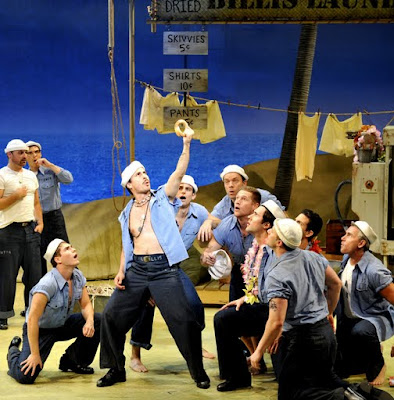 Standing out as the pirate-like ringleader of this band of un-merry men is Luther Bellis, played with sexy aplomb by Matthew Saldivar. With his tattoos, bead necklaces, open shirt and goatee, he’s like Captain Jack by way of New Jersey, and, to my mind, is absolutely magnetic whenever he’s onstage, even if he isn’t talking. He’s just as good demonstrating his player attitude as he is conveying a boyish awkwardness, particularly in his scenes with Nelly. There’s a beautiful vulnerability at work in those scenes, as we sense that, behind the aggressive boys-club aplomb is a truly good man who is all too aware of his position, both in and outside navy life. In short, it’s a star-making performance, and I’m curious to see more from Saldivar in future.

The other notable performance comes from Anderson Davis as straight-arrow Lieutenant Cable, who comes to the South Pacific island as a Princeton straight-arrow, but is soon fumbling to find a center to the spinning madness. Davis is mesmerizing in conveying Cable’s entrancement and accompanying panic with the new world the island shows him, notably in the form of Liat (Sumie Maeda), daughter of souvenir hawker Mary (Jodi Kimura). Sher brilliantly plays up the opportunism and exploitation at work in both Cable and Mary’s machinations; the former, delivering a gorgeous, blistering “Younger Than Springtime”, brings to mind vague, troubling hints of pedophilia, while Kimura’s throaty, if hypnotic delivery of “Bali Ha’i” is sung like the huge, musical sales pitch it’s supposed to be. She’s played as a desperate mum eager to give her daughter a better life, and immediately recognizes Cable as just the man to do that. With her crooked grin, low-lidded gaze, and slow, deliberate walk, Kimura delivers a nuanced, fascinating performance that could easily fall into racial stereotype, but never, ever does. 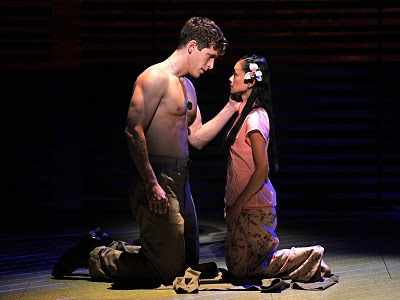 As to the leads, Jason Howard (as Emile) has an amazing, beautiful full singing tone, and really fleshes out the emotional undercurrents of his character in his numbers (especially “This Nearly Was Mine”), but his French accent is sometimes more Pepe Le Pew than Paris, and his acting feels a bit too “Big Romantic Lead”-hammy at points. I don’t want to see Emile trying to romance Nelly -I want to know he can (and does), and I wasn’t always buying it. Maybe it was opening night jitters, or to much Wagner (Howard just came off of playing Wotan in the German composer’s ring cycle in Strasbourg). As his love interest, Carmen Cusack is solid and reliable, with a beautiful, clear soprano tone. But… she’s weirdly distant; her hot-blooded Southerner seems strangely Polar, and it takes away from the character’s essential, unpretentious earthiness. The famous “I’m Gonna Wash That Man Right Outa My Hair” is staged with inventive choreography and props (including a vintage tropical shower), and the chorus of Nurses around her is certainly vivacious but there’s something insincere in Cusack’s delivery. I got the feeling she’d be more comfortable doing a solo show of R&H hits than getting her hair wet. 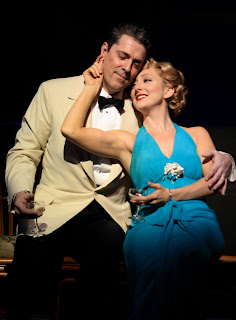 Perhaps most importantly, Cusack and Howard lack the crucial to make their scenes together really sizzle. A bit more consistency with the leads and a little more sincerity (though really, you can’t fake chemistry) might make for a more moving experience, especially considering the theme of the work -racism -rises or falls based on the characters’ sincerity. When her character finds out Emile’s first wife was, as she put it, a “colored”, she says it as though she has something unpleasant affixed to her shoe; never for a moment did I believe Nelly harbored a massive racist streak , one that serves as a huge symbol of the deep conflict at work within both the musical and it earlier forbear. Thing is, I needed to feel her utter disgust and repulsion -however uncomfortable -to really feel the full force of the work. I found it more with Cable, the sailors, and Bloody Mary than with the leads. Maybe I was just looking too hard for meaning, but I also believe Sher fully intended for the horror of racism to be keenly felt by audience members, and, certainly it is, at least in some scenes. It just isn’t consistent, especially where it needs to be.

Still, there’s no doubting the musical chops -of the leads, or indeed, anyone – for one minute; the ensemble belts out all the beloved Rodgers and Hammerstein hits like they were born to do it, and, in the end, I suppose that’s what many -most -people come for. Between the Catherine Zuber’s lovely costumes, Christopher Gattelli’s sprightly musical staging, and Michael Yeargan’s super-inventive sets, this is an evening of musical theatre you won’t soon forget. And you might just look at the sunny film version a bit differently, too. Sometimes darkness amidst the sun and sand is a refreshing change. And sometimes, across a crowded room, you’re smacked in the face with something ugly you didn’t expect. It isn’t always a bad thing, even if the sunshine is awfully nice.

Photo of Matthew Saldivar and sailors, and Anderson Davi with Sumie Maeda, both by Peter Coombs.
Photo of Carmen Cusack and Jason Howard (bottom) by Kim Ritzenthaler.