Considering Toronto is cold at least half the year (if not more), anytime there’s an opportunity to get outside, in the nice weather, to … do stuff (read: anything!)… us locals take it. We’ll even sit on a beach that isn’t a real beach. 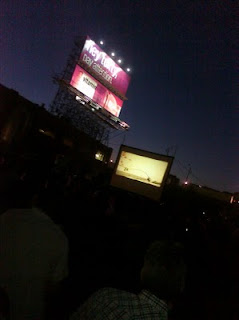 One of these carpe-diem-esque activities in watching movies out of doors. True, other locations around the city have had this very-same activity -including screenings at the loud and cruelly bright (and equally chaotic and utterly manky) Yonge-Dundas Square. I love Y-D Square for live music shows and some other live events (World Cup time is always interesting… if a bit dangerous if you’re a small woman) but for movies? Hmm. Would it be silly of me to want something intimate in an outdoor arena? Or is that being a bit… outre?

Enter Open Roof Films. Started by a group of art-minded Torontonians (including Michael MacMillan, former Executive Chairman and CEO of Alliance Atlantis), the series has a special focus on showcasing Canadian talent, as well as building community among the vast network of Toronto’s numerous cultural and economic pseudo-villages. I interviewed one of the founders of this newly-minted series a couple weeks back on the radio, and during that interview I was told the series is based on a similar idea out of New York City, and arose from that, as well as casual conversations between people who just… love movies (a lot), and, like me, were seeking a way of bringing people with similar passions together. Seated in a group, illuminated by a screen’s glow and a canopy of stars, one becomes enraptured with the night, the sound, the music, and the crowd. Really, you can’t much more intimate.

Part of what gives the Open Roof Film series this special brand of intimacy is its location; situated in the parking lot of a local brewery, the space is nestled between a raised highway (and Lake Ontario) to the south (and yes, you can actually see the lake), the thick-set brick building of the Amsterdam Brewery to the West, and a massive screen and sound system to the north . The East opens to the spectacular light show of the CN Tower and the cluster of skyscraper in the financial district. You’re close enough to the lake that you can actually see stars when the sky darkens. A gaggle of portable chairs is set up where the seriously filmy-minded can situate themselves, while a wide bar runs the length of space at the back, for the more social among us. It’s a nice set-up that encourages interaction and conversation, while providing a respectful option for those who want to sit and concentrate.

Not that there was a whole lot of that happening the night I attended. This Movie Is Broken, the film featuring band Broken Social Scene, was being screened, and the evening had the distinct feel of a gigantic party, much like the band’s own concerts. Observing the crowd swaying and smiling (some even danced), I couldn’t help but wonder how many had (or hadn’t) gone to see Bruce MacDonald’s movie when it was shown in a cinema proper. How much did being outside on a beautiful summer night influence their decision to see it? To go to a place where they could drink beer, smoke, dance with their girl/boyfriends, and laugh and chat with their friends? Probably a whole lot. 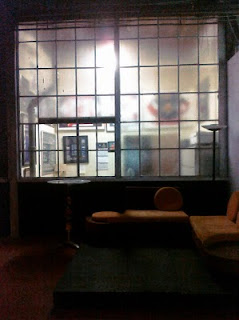 This Movie Is Broken is just the sort of film that was perfect for an outdoor film series; with a romantic storyline interspersed with some genuinely excellent concert footage (taken from a Toronto show last year), MacDonald’s dreamy, gorgeous homage to love and music was a genius choice to play at Open Roof Films, and a great example of the power of outdoor event to draw disparate group of people together. While the age of attendees ranged from anywhere between 25 and 40, there was no “average” anything (other than the challenging parking, which is de rigeur in Toronto, alas). There was a nice casual vibe to the entire evening, even though the audience maintained a respectful (ahem, Canadian) silence through much of the movie’s running time.

It was interesting when, peeking through the brewery windows (that lead to the loos) at one point, seeing the tiny dots of enraptured faces sitting mute and staring at a screen as the CN Tower flashed sades of blue and red past them. It says something about the power of cinema, music, and togetherness that simply can’t be replicated in a multiplex. Combined with the gorgeous after-film visuals of artist Brian T. Moore and the shining skyline, one couldn’t help but be intoxicated. Noise, motion, light, stillness, silence -and lots of gravel: I think this is the beginning of a beautiful romance… or maybe a re-introduction to an old lover -movie-going -I thought I’d forgotten the smell and taste and touch of. What bliss.