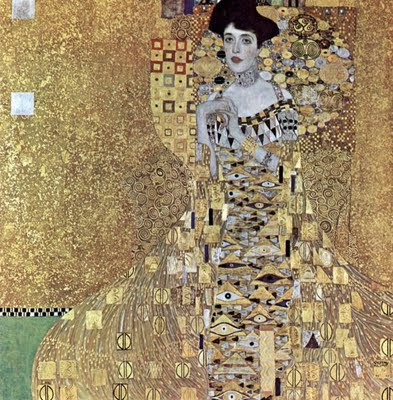 I missed that opportunity in Vienna years ago, but, thanks to the Neue Galerie here in New York, I got it lastnight. Shown as part of their current exhibition Vienna 1900: Style and Identity, the work, tastefully incorporating design, art, and various writings, is on view at the museum through June 27th.
After checking bags and jacket, I walked up the narrow, winding staircase (reminding me so much of the narrow passageway I climbed in Vienna, to see one of the flats Beethoven lived in) and, on the second floor, caught the unmistakable sight of Klimt’s signature golden swirls. I entered one gallery and immediately had to check myself. The portrait of Adele Bloch-Bauer (I) stood before me in all its glinting, glistening glory. I almost cried.
Klimt is, for me, one of those painters with such a singular vision and style, any amount of copying or imitation just comes off as hokey and dumb. The closest I ever saw was the costuming for Bram Stoker’s Dracula; Oscar-winner Eiko Ishioka really captured the rich, feminine, sumptuous beauty of Klimt while keeping an eye on his penchant for strong contrasts and soft shapes against strong ones. There’s a nod to outfits in the exhibit too, with dresses shown beside or near paintings -a nice nod to the role of fashion in culture. I was especially thrilled by the billowing white dress with cascading layers and complex, thick-thick textures; it reminded me so much of Ishioka’s design for Lucy’s wedding gown/shroud, that I half-expected Sadie Frost to come creeping around a corner of the wood-and-dark-rugged Galerie.
Seeing his work up-close and in-person for the first time, after having loved it for over 20 years, was a much more emotional experience than I anticipated -and the work itself flew off the canvas (or sheet) with a kind of casual ease I wasn’t expecting. Outside of a few early works that are featured, it all looks…like bleeding, breathing, blinking. Each work, whether painted in rich oil colors or drawn with pencil, looks like a vein that’s been opened. Something divine -and very powerful -pours out on those surfaces. And more often than not, it sees like it was women who inspires the most rolling, flowing, richly memorable moments. 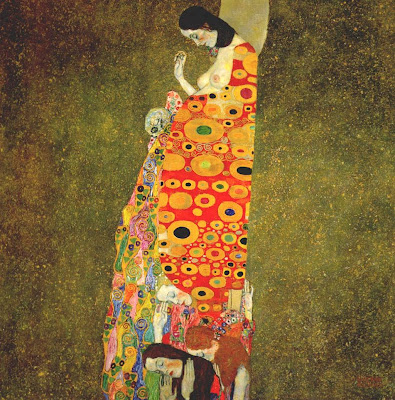 He was touched, but I sense, also turned on. And maybe, as The Economist wisely observed, that once Klimt was “(s)tripped of his wet palette and gold, it is the artist who appears naked in the images, offering a startling insight into (his) own private world.” The raw, honest vulnerability of eroticism has a power all its own, one we’ve yet to fully embrace more than a century later. 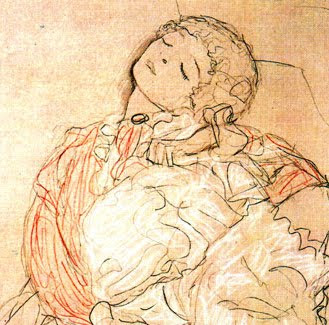 I thought about Klimt, and art, and powerful women a lot lastnight, as I walked by dozens of posters advertising Lady Gaga’s show on HBO and hundreds of push-up-bra’d-and-super-high-heeled young women, as I carefully weighed fattening dinner options and went out in a low-cut, slinky black dress, and as I pulled a sweater on and put on my flat shoes before getting on the subway. What constitutes female power? Is it bling? Boobs? Boys? On a larger level, is it okay to be perceived as purely a sexual being? Where’s the person beneath the parts? Does anyone care? Also, I keep wondering about the role of trust between an artist and muse -or, for that matter, being a man and woman. I’m not sure I’d ever be comfortable with any artist sketching me in so vulnerable a state but… that’s the power of these drawings: they betray an extraordinary level of trust that translates into a new, empowering form of male/female relating.
Seeing Klimt’s work up close gave me a whole new awareness of not only the shifting ground of artistry and the beauty of orchestrating its creation, but of the power I, as a woman, hold, and how easily, quickly, and thoughtlessly I give it away in little tidy parcels every day. I aspire to be Adele. I aspire to be as free as the women in those drawings. I want to vanish into Klimt’s beautiful, glittering world. Alas, I’m stuck with a sweater over a dress, navigating a maze of colorless subways in dirty, crazy, loud New York. At least the Neue is close by.
Adele Bloch-BauerEiko IshiokaGustav KlimtintimacyKlimtmasturbationNeue Galerienuditypaintingpowersexualitytrustwomen