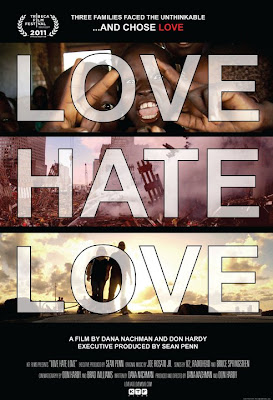 Hope as a concept, a feeling, a way of living and perceiving the world feels quaint, strange, and weirdly distant much of the time. And yet it’s what drives change in the world.

I thought about this after seeing Love Hate Love, a powerful documentary that had its world premiere at the tenth annual TriBeCa Film Festival lastnight. The work, directed by Don Hardy and Dana Nachman, seeks to counter society’s intrinsic pessimism with the idea of something bigger, larger, and more ultimately more important. The movie is a fantastic depiction of vision over visibility in action, viewed across three different lives and experiences. The TriBeCa Film Festival website wraps up the story nicely:

After Steve and Liz Alderman lost their 25-year-old son Peter in the World Trade Center, they took the money they were awarded as compensation and started a series of mental health clinics in Uganda, for those who have been victims of war crimes, child soldier enlistment, and more. After Esther Hyman lost her sister Miriam in the mass transit attacks in London on 7/7/05, she founded an eye care clinic in India in her sister’s name. And Australian Ben Tullipan lost his legs and suffered from massive burns in a bombing in Bali in 2002, after which he made a remarkable recovery.

In a world of cynicism, doubt, anger, vengeance, and fear, the idea of hope stands as a shy, if powerful presence that can change the entire center of gravity.

I remember the first time I went to Ground Zero. I’d been there many times in the past, when the World Trade Center was still in existence. I had a ticket broker friend who worked on one of the floors of the second tower. We’d lost touch over the years but I thought of him that awful day in 2001. When I went down to the site, a mere two months after the attacks, I wasn’t sure what I was supposed to do. Tourists were gawking and taking pictures. People were softly crying. The air was thick with silence and grief.
In the ensuing months, that grief turned to rage, to hatred, to cries of vengeance. Whether you literally lost someone that day or not didn’t matter. It was Old Testament eye-for-an-eye justice America wanted. Love Hate Love takes this bloodlust -the tender open wound that weeps from an injury fear created – and flips it inside out. All the people in the film suffered some kind of loss: Esther Hyman lost her sister Miriam in the July 2005 London bus bombings, Ben Tullipan lost his legs in the 2002 Bali nightclub bombing, and the Aldermans lost their son Peter in the 9/11 attacks. All have turned their grief into something positive. They didn’t give in to fear or to hatred. 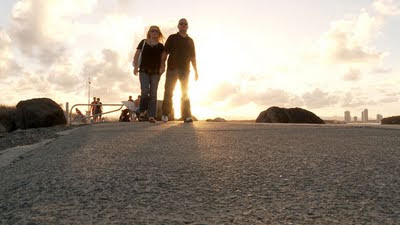 So while Love Hate Love could be just another Peter Pan-style exercise in feel-good-ism, it’s ultimately much more. Through interviews, photos, and recollections from friends and family, we are given a sense of these peoples’ monumental loss, and how that colors their day-to-day lives. Hardy and Nachman widen their scope, choosing not to focus on sadness, and in doing that, allow viewers to see how grief, turned inside out, actually looks. And what an awesome sight: small children whose eyesight has been restored. A boy with no legs who learns to accept his “different-ness” and runs around a mini-putt course. A teenaged boy in Uganda who slowly learns to deal with his experiences as a child soldier, drawing his past experiences in colorful, vibrant hues. It could all come off as so trite, so inconsequential. But it doesn’t, and it isn’t, thanks in large part to the skillful weaving of respective narratives, and the singularly non-political stance taken by the filmmakers. This is a film that refuses to point fingers; instead, it lends hands and opens hearts.
At the post-film Q&A session hosted by film writer and journalist Marshall Fine, the participants, all seated onstage with Executive Producer Sean Penn, seemed amazed, delighted, and deeply moved to be part of the project, and perhaps, a larger movement that the film represents. Esther Hyman fretted that she’d come off “too English” in the film, and she and Liz Alderman both bonded over birthdays (of Esther’s sister “Mim” and Liz’s son “Pete” respectively) being the most difficult days for them. Each updated the audience with advances on their respective efforts, with the Aldermans talking about the expansion of their mental health care facilities in Eastern Africa, Hyman discussing her eye care center in India, and Tullipan sharing the news that one of the young boys featured in the film whom he speaks with has since gotten out of his wheelchair and is learning to walk with prosthetics. 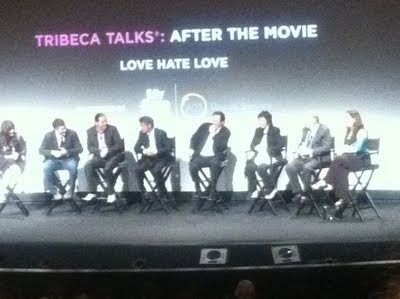 Whenever I’m in the financial area of Manhattan now, I look to the rising buildings, and I remember that time, ten years ago. I remember all that has happened as a result of it. Giving in to pessimism, as Penn said lastnight, is so easy. Holding on to hope is important -but believing in it, and living it, with a palpable sense of change, is hard. “Be the change you want to see in the world.” Love Hate Love shows that, despite, or sometimes because of the odds, it can -and should -be done.
Hope: not so quaint after all.
Poster and middle photo courtesy of KTF Films.
Bottom photo from my Flickr photostream.
Dana NachmanDon HardyhopeLove Hate LovemovieTriBeCa Film Festivalvision over visibility