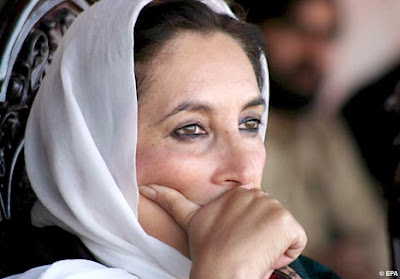 For a long time now I’ve wanted to write about my interview with Duane Baughman and Mark Siegel. The two men were in Toronto this time last year for the screening of their film, Bhutto, at the annual Hot Docs Film Festival, following their world premiere months earlier at the Sundance Film Festival. The Toronto screening came and went, life moved on, and I never seemed to properly make time to sit down and write – until now.

I visited Ground Zero last week, less than 12 hours after President Obama’s historic announcement about Osama bin Laden’s death. With news reports filled with pertinent details and reports that paint a damning portrait of Pakistan and its possible role in harboring terrorists (or not), the screening of Bhutto tonight feels like a slow, patient untying of a complex Gordian knot. That’s not to say the movie is slow -it isn’t – but it is layered, the way any documentary worth its salt should be.
I discussed this in my chat with Duane and Mark last year on the radio:
Independent Lens is broadcasting the timely documentary tonight on local PBS stations (check yours here). Baughman, its Director, and Siegel, Co-Producer, present a complex, if deeply vital portrait of both a woman and a country that we, here in the West, have a lot of preconceptions around -especially since the news of Osama bin Laden being killed May 1st.
With numerous interviews (including fascinating input from The New York Times’ John Burns and vitriolic assertions from Fatima Bhutto, Benazir’s niece), fly-on-the-wall footage, and a thorough, if compelling history lesson (not to mention a pulsating soundtrack by The Police’s Stewart Copeland), Bhutto is a riveting look at a country that’s been painted in far too broad strokes by a Western media eager for villains. Truth be told, there are no clear villains in Bhutto, but (hint hint) General Pervez Musharraf doesn’t come off very well; he visibly squirms, as the camera casually lingers on him, providing glib answers and a ton of silence. The effect is awkward, as it’s meant to be, though his inclusion in the documentary might seem questionable. In fact, when Siegel was on The Daily Show just months after Reconciliation: Islam, Democracy, and the West came out (a book he co-authored with Benazhir Bhutto), he took host Jon Stewart to task for having the former Pakistani leader as a featured guest. Siegel had just finished working with long-time friend Bhutto on Reconciliation when she was assassinated. “She prayed for the best and planned for the worst”…

Even if you still have questions around Benazir Bhutto and her approach to Islam, her handling of government policy, and those troubling corruption charges, you will most certainly come away with a more thorough, nuanced undertanding of the machinations of politics and terrorism, and the place where the two meet, in one tragic explosive moment. Watch it. You’ll be glad you did.
al-QaedaBhuttodocumentaryDuane BaughmanHot DocsIndependent LensJon StewartMark SiegelOsama bin LadenPakistanPBSradio interviewterrorismThe Daily Showvideo interview