Szymanowski At The TSO: Shimmering & Sighing There was an air of impatience in the air at Roy Thomson Hall Friday evening, as if concertgoers couldn’t quite settle in when the lights went down. I was reminded of the people who sit at Stonehenge every summer solstice, vibrating with anxiety at the first hints of yellow-orange beams making a path among the stones. Music is perhaps similar to light in some respects, but its path should perhaps not be so predictable. The impatience was owing largely to one thing: the monolithic presence of Beethoven’s Symphony No. 3 (the so-called “Eroica”) in the program’s second half. The Toronto Symphony were on the second of a three-night series of music from the 19th and 20th centuries. Debussy’s symphony poem Prélude à l’après–midi d’un faune (Prelude to the Afternoon of a Faun) opened the program, and was followed by Szymanowski’s Violin Concerto No.1 (Op. 35). Both are in no way unusual repertoire choices — but the disquietude was palpable. People wanted their Ludwig, and they were prepared to fidget, sigh loudly, and shift around frequently until they got it. What hooked them (and this was delightful to note) were the twin forces of soloist Christian Tetzlaff’s sheer passion for the concerto, and conductor Hasan’s finely finessed coloration.

Furthermore, what made the evening so interesting on a personal level was that the date of the concert coincided with what would have been my mother’s birthday; I couldn’t help but think, sitting in the hall, that she certainly would have been among the impatient Beethoven majority. There’s nothing wrong with this, of course, but since deepening both the width and breadth of my own musical scope over the past few years, I find the so-called hits just aren’t enough, and I’m not alone in that sentiment. Recently there was more than a little griping online with the focus of the works of Beethoven in various new season announcements; it feels like not that long ago that I would have been horrified by this reaction, but now, I tend to sit in hearty if hesitant agreement. This isn’t of course to imply Beethoven’s Symphony No. 3 (or any of his other work) isn’t a great and important piece of art — but when’s the last time you’ve heard Creatures of Prometheus or Cantata on the Death of Emperor Joseph II or King Stephen Overture? (The London Philharmonic is doing the latter two next April and did the first last autumn, natch.) Financial realities largely dictate the programming for orchestras and organizations not involved in a broader, government-connected funding model, and even then, there are numerous stakeholders (investors, CEOs, sponsors) who fully expect to see BIS (Bums In Seats) as part of their ROI. That means programming the hits, with some not-so-knowns at the start for good measure. 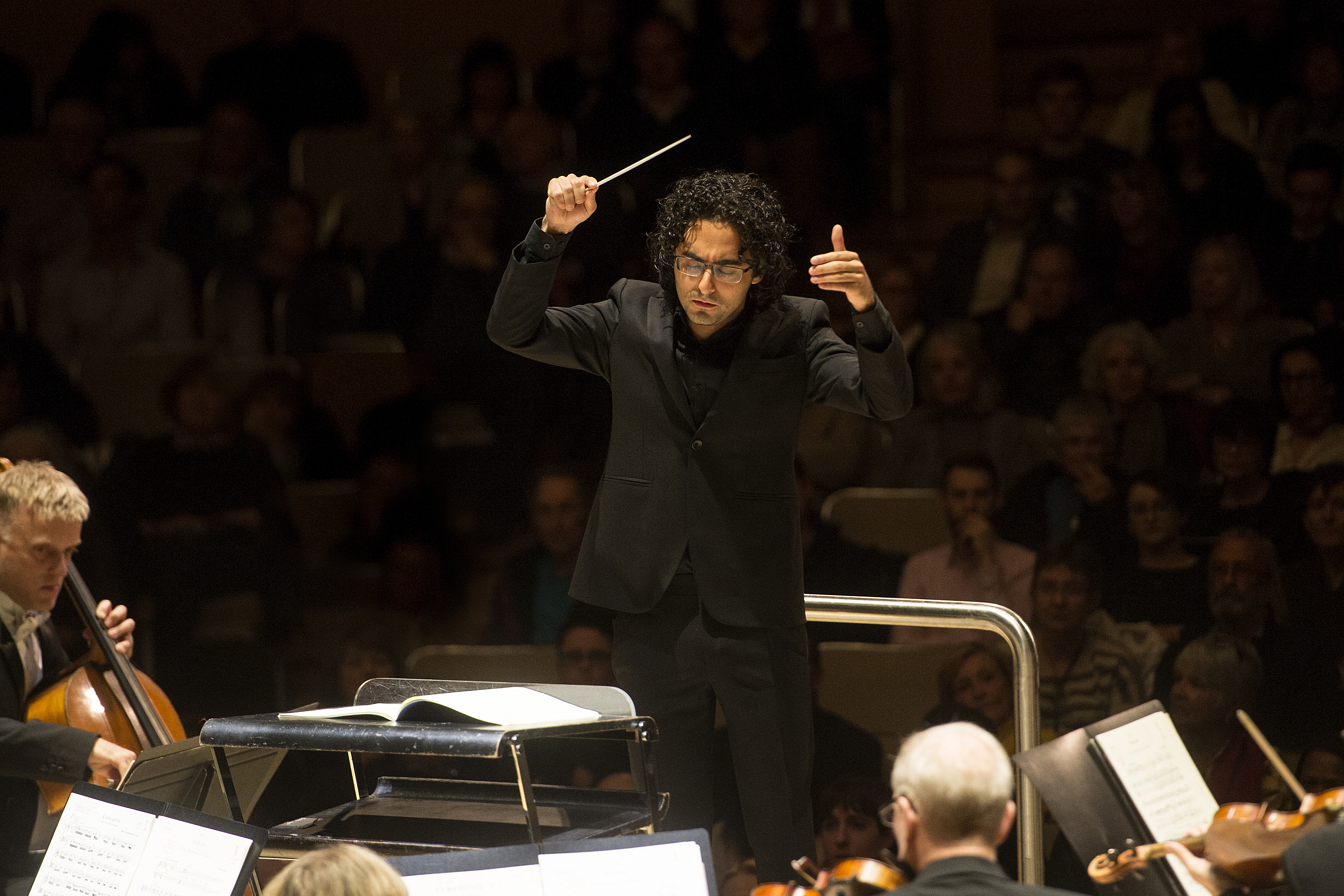 Yet the Debussy piece performed by the TSO last evening (as well as tonight) is not in the slightest bit unknown, though it is firmly modern in content and style. Premiered in 1894 and based on the work of symbolist poet Stephane Mallarmé from 1876, it’s arguably one of the best-known works within French classical music. An evocative musing from a mythical satyr, the work reflects, as noted in the program, “Mallarmé’s hazy, dream-like ideas with effortless tonal magic.” British conductor Kerem Hasan, newly appointed Chief Conductor of the Tiroler Symphonieorchester Innsbruck and a frequent guest of numerous European orchestras (he’s led the Concertgebouw, the Royal Liverpool Philharmonic, and the ORF Radio-Symphonieorchester Wien as part of the Salzburg Festival), makes his Canadian debut with these concerts, filling in for an indisposed Louis Langrée. Hasan underlined the contrasting temperatures and textures within each winding passage: hot-cool; soft-hard; smooth-rough. One could positively see the works of Franz Von Stuck come to life here. Hasan’s opera background (he’s led performances with the Welsh National Opera, the Meininger Staatstheater, and the Tiroler Landestheater) was especially apparent in drawing out sectional relationships, at once lyrical and theatrical. With simple, fluid gestures, the young maestro conjured long, languorous phrases, only to dip, dive, and reshape them anew — round, then triangular; square, then octogonal, then back again, the interplay between strings and woodwinds smiling, serious, sensuous, all at once.

This sensuality transmuted into a considerably more intense and mystical form with Szymanowski’s Violin Concerto No. 1. The piece’s first bars, like fine black eyelashes fluttering to wakefulness, give little indication of the piece’s extraordinary and vigorously passionate progression. Written between 1916 and 1917, the Ukrainian composer once described the work as “a rather lonely song, joyous and free, of a nightingale singing spontaneously in the fragrant Polish May night.”  Written with his friend, the celebrated violinist Pawel Kochanski (also the dedicatee of the piece), Szymanowski sought “a new style, a new mode of expression for the violin, something in this respect completely epoch-making.” Indeed, the work not only heralds a new (and very gripping) sonic experience, even now — it slinks, shimmers, shrieks, and sighs, undulating through its varied five sections (or ‘spans’) innately linked through the violin’s nightingale song.

It would have been easy to sit in astonishment at the virtuosity required of the violinist here — indeed, many patrons around me, previously sighing for Beethoven, were captivated (rightly) by Tetzlaff’s mastery. From my perspective, technique was precisely what led to transcendence; it wasn’t there purely for its own sake. Tetzlaff made this journey clear with a clear economy of elegant expressivity. I’d not seen the violinist since his performance of Schoenberg’s Violin Concerto (Op. 36) with the Rundfunk Sinfonieorchester Berlin in 2017, and while there are clear lines between the works, Tetzlaff’s attention to granular detail and appreciation of sweeping grandeur allowed for a range of sonorous textures to shine in an ever-changing kaleidoscope of lustrous atmospheres. Von Stuck’s satyrs were now dancing with Klimt’s water nymphs and Redon’s Buddhas in a grand garden of green-blue delight. This was music-making which was, by turns, fluid, jagged, poetic, pointillist, starkly sexy and richly impassioned.

Tetzlaff’s performance was marked by meticulous attention to detail and a gorgeous variance in colour. Hasan’s quietly authoritative leadership granted the orchestra a responsiveness that opened the door to a seamless sonic partnership which, more than once, conjured the ghosts of Strauss, Schreker, Zemlinsky, Ravel, and indeed, Debussy. The program note also mentions the work of Scriabin in its reference to the “non-Western sounds that colored the impressionistic music” for the latter two composers, naming Scriabin as well, and I couldn’t help but feel by the close that the swirling, sensuous atmosphere of the evening would’ve been better served by featuring one of his works in place of good old Ludwig. I confess I left early, happily swimming in Szymanowski’s electric, glittering lines, not daring to put on any music once in the car and headed home. Sometimes, souls need to swim; Tetzlaff, Hasan, and the TSO offered a good reminder that plunging into the sea by moonlight is a good thing; one need not wait for the sunrise to gain one’s bearings, but to simply trust the currents. One never knows what might one see, let alone who or what might just take us by the hand and lead us into ever-deeper waters.

Counting From One To Ten (But Not In That Order)

Luca Pisaroni: “The More You Are Exposed To New Things, The Better It Is.”