This morning I sat in my light-strewn living room, scrolling through my Facebook newsfeed, impatiently waiting for the espresso to gurgle itself to sharp, acid life, when I learned of the passing of Swiss actor Bruno Ganz. Known for his roles as the angel Damiel in Das Himmel uber Berlin and Hitler in Downfall, Ganz was active mainly in Europe, and was known for stage, screen, and symphonic appearances. He was friends with Claudio Abbado, and among many readings, offered the work of German poet Hölderlin at a tribute concert to the late conductor in 2014. I recall seeing Ganz’s name through the years listed in various orchestral program guides in Germany and thinking how special it would be to see him perform live. Alas.

In looking through various reports (including one from a recent project in which Ganz is bearded, and to my eyes, resembles some kind of magical Teutonic Zeus) I was reminded of my introduction to Ganz’s work as a teenager, which was (as I suspect was true for many artsy, angsty teens growing up in 1980s North America), through Der Himmel über Berlin, known to the English-speaking world as Wings of Desire. Wim Wenders’ poetic meditation on history, spirituality, and human vulnerability left an indelible impression, with Ganz’ expressive face and haunting voice creating a spell that never quite lifted. As The Guardian’s Peter Bradshaw observed about his performance, “Ganz’s face is delicate and boyish, with an ascetic sensitivity. The poetical presence of his beautifully modulated speaking voice is also what makes the role so memorable.” In seeing the movie again last summer, I found myself weeping at the delivery of certain lines, the framing of a certain shot, the look in the eyes of both Damiel and Marion (Solveig Dommartin) in the club where the roars of Nick Cave create a hypnotizing background din. I’ve not been able to watch it since; emotions come brimming to the surface like uncontrollable hot lava, a reaction I could have never anticipated as a wide-eyed, enchanted teen. Such sensitivity has, I realize, become something of a hallmark, one I’ve grappled with to varying degrees of success. Oftentimes that sensitivity and wonder are tied up together in strange configurations and manifest within the cultural realm. The older I get, the more I am amazed at the mechanisms behind how one offsets the other; the way a singer will lean into a note, the resonance of percussion across the vast expanse of a hall, the wet ambiance of strings — things that I find myself invariably and sometimes wordlessly moved by. Writing about such things is no easy task, and it will surprise no one to learn I have taken a step back from such duties. Enthralled, enraptured, enlightened, enraged… enchanted; all these things, and more, live within and can be icily uncomfortable to narrow into the mean parameters defined by the precise and rather severe geometry of language. Enchantment was borne in my younger days through the encouragement of figures who would place challenging things in front of me, things (be they movies, books, TV shows, composer works) they had full faith I would somehow understand and appreciate. I was raised in what might be termed a firmly anti-intellectual household, with newspapers being the only regular reading source (and no, not the fancy, so-called “paper of record,” either); attempting to reach beyond that atmosphere, despite my mother’s (primal if passionate) opera love, was not at all encouraged and was, in fact, basis for fierce and unyielding criticism. But discoveries were always possible; one of those things was Wings of Desire, introduced by a piano teacher (now a dear friend); another was Jacques Cazotte’s The Devil in Love, loaned to me by an arts-loving teacher my final year of high school. (Where or how she got hold of an English translation I cannot say; the work only got a proper one a few short years ago.). Her dog-eared copy, with pencil underlinings from her own younger days (I presumed), brought a world of intrigue and yes, enchantment, setting my Faust-loving imagination aflame. “The devil takes many pleasing shapes” is its premise, with a Borgian-style layers-within-layers narrative, an intentional blurring and integration of the surreal, the Gothic, and the fantastical, and free floating questions of the nature of desire, morality, and abundance, reflecting the spirit of the age in which it was written (1772) and offering a timely-timeless devilishly dialectical dance that you can still shake your ass to in 2019. 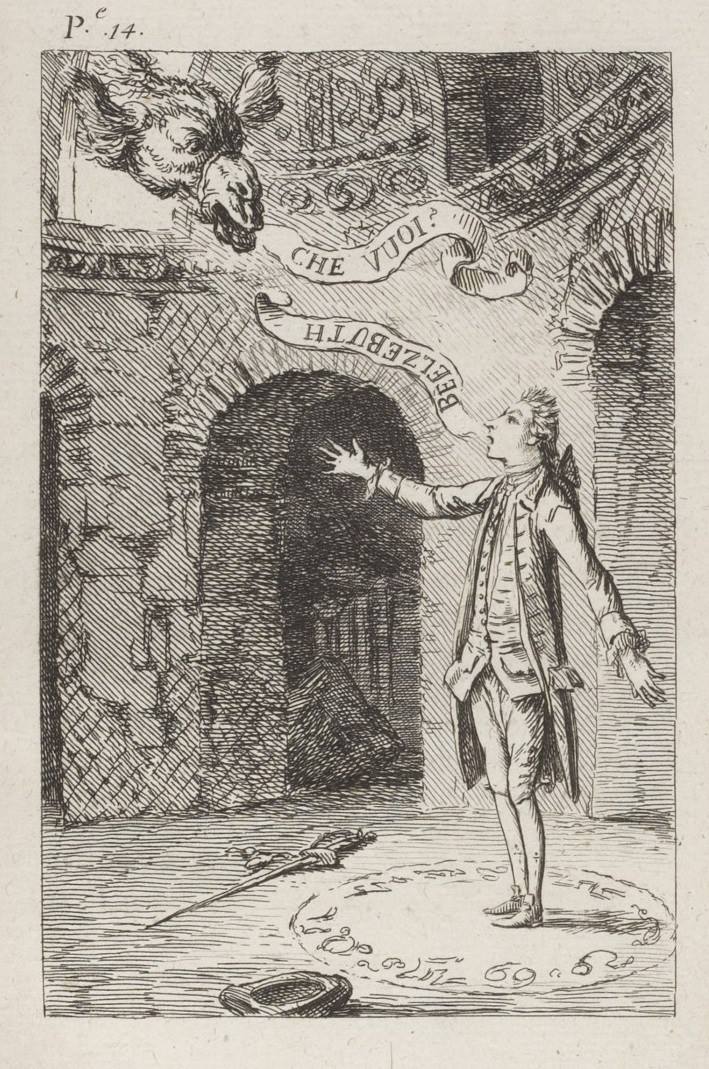 Illustration from the first edition of “The Devil in Love” by Jacques Cazotte. (Photo via the Stanislavsky Theatre).

Alongside updates and tributes to Bruno Ganz on my newsfeed were tidbits about the novel’s operatic translation which recently opened at the Stanislavsky and Nemirovich-Danchenko Moscow Academic Music Theatre, in Moscow. Russian composer Alexander Vustin created the work over several years, finishing it in 1989; the work lay dormant until the theatre decided to feature it to mark their 100th birthday. This work made my list of intriguing things for 2019, and if photos and quick news clips are anything to go on, it’s a production I hope to someday experience live; I remain open to whether the element of enchantment will be as present as it was upon my first reading as a teenager. My acute sensitivities lean in a direction which oppose nostalgia, but embrace reshaping; this quality has inserted itself into areas tangible and not. I have embraced much of what my mother left me as my very own, without (at last) the drama of recrimination or any burden of guilt. It has come as something of a pleasant surprise that the things my mother greatly valued are the things I have allowed myself to reshape and redefine, sometimes with purposeful intent, other times with an unthinking authority that is, I suppose, the natural result of being an only child. Emboldened by a new sort of freedom which arose out of my mother’s passing (a domineering presence rendered into initially shocking absence) meant being allowed to remake her still and finite passions into my wide-ranging passionate pursuits.  Inheritance has become a less a winding lane of the past than an avenue for the future.

Still, the loss of a precious cache of items which had belonged to her has been hard to overcome, not only for the fact they were pregnant with her long ago and far-away memories, but because they were so wrapped up in mine — new, fresh, raw. Without divulging every painful detail, I will only write: in the morning I moved into my current place of residence, I had a box of jewelry and a satchel of pearls; things were delivered and arranged; once that was finished, I passed out in exhaustion, and realized with horror, shortly thereafter, that the box and satchel were nowhere to be found. What did I do, I keep asking myself, to deserve this? Why wasn’t I smarter? Why did this have to happen? My mother’s understanding of (and approach to) the world was built on merit-based effort and behaviour: be a good person, and good things happen; be the opposite, and you deserve what you get. It’s a notion that has tipped the broader world into extreme chaos, and, within my micro one, radiated burning slabs of blame, shame, and a horrible, near-paralyzing sadness. I have kept this information to myself and shared it with only a few (including yes, proper authorities), but those items, I realize with much pain, are not going to magically appear before me, the way Damiel suddenly manifests before Marion, the way Biondetta appears before Alvaro — no angel, no devil, there is only the wide, yawning chasm of loss.

The revelation here of my sharp vicissitudes of providence means enduring the inevitable smirks and Schadenfreude of some. I accept this. Various details of my life are, apparently, points of envy — something I find utterly baffling to comprehend. (I envy the presence of their partners, paramours, children, extended relatives, and wide and active social circles, particularly during the lonely holiday periods, but at regular weekends as well.) I have chosen to reveal this personal history in order to embody a dictum I voiced within the past year, one relating to the importance of embracing vulnerability. There are things to be silent about, and things to shout about, and still yet things that straddle between; the point is acknowledging the tender spot within, where vulnerability meets and makes peace with the existential zero of silence. Pema Chödrön might remind me this is precisely where I need to be, in the middle, fully present. It’s hard, and it’s lonely. The symphony of sighs fades in and out; today it was interrupted by the whispering wonder of enchantment. I’m glad I was sensitive enough to listen. Maybe in the spring it will become a song.