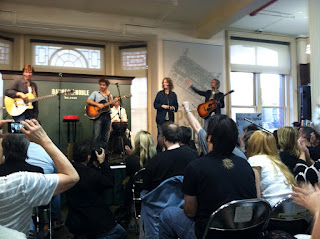 The idea of imitation being the most sincere form of flattery is one I’ve been mentally turning back and forth the last while. If someone stands up on a stage and imitates someone else – well – does that make them a great artist too, or merely a gifted technician?

This question came into focus the last few months as I attended two different musical theater events, Million Dollar Quartet and Backbeat: The Birth Of The Beatles. Both works are based on real people and real music history events, and both involve the depiction of cultural touchstones. Constant comparison is an evitable part of such events, especially if one’s been exposed to the real thing -or even, bizarrely, a good imitation of the real thing.

In the former, my companion turned up her nose to the performer playing Elvis Presley, dryly noting she’d seen far better impersonators in concert, and noting the actor playing Johnny Cash wasn’t menacing enough; she’d seen (and met) the real thing years before, and the performance (/imitation) simply didn’t measure up. Similarly, attending Backbeat afforded me the opportunity of unfair comparison, having seen Paul McCartney perform at Yankee Stadium last year. It wasn’t so much the performer didn’t measure up that bothered me as it was the knowledge he never could.

At the end of Backbeat, people were cheering and applauding, out of their seats and dancing to the loud, raucous sound of “Twist and Shout” – but what were they cheering, really? The performance? Or the music itself -and their memories associated with the music? It struck me as a surreal sort of nostalgia, one magnified by years of people having a casual connection (however tenuous and imagined) with their pop idols via the internet, where a few clicks yields live performances they very well may’ve been at themselves. Who wouldn’t want to re-live happy memories, of happier times, with a younger self, bright and bushy-tailed, full of beer and brawl, piss and vinegar, howl and hope? The internet provides a quick, easy hit of nostalgia, available 24/7 – but I wonder, at what cost? 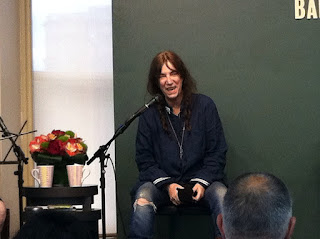 In June, I saw Patti Smith perform material from her remarkable new album “Banga.” Before an excited audience at the Barnes and Noble near Union Square, Smith and her band (including longtime guitarist Lenny Kaye) did three numbers from the album: the swirlingly romantic”April Fool”, the 50s ballad-like “This Is The Girl”, and the album’s title cut, with its fittingly literary inspiration. The audience smiled,  cheered, clapped, initially hesitant but eventually exuberant. There were no calls for “Dancing Barefoot” or “Because The Night” though I’m sure a few people were panting to hear them. This wasn’t about nostalgia -it was promotion, after all -but Smith seemed far more interested in forging an authentic connection with her audience; it was refreshingly to see an artist of her calibre so genuinely happy to be there, wandering through the crowd before the show, chatting, and later, proudly presenting new material and carefully explaining various songs’ origins. I found it especially encouraging to note so many young women in the audience, hanging on Smith’s every word. The smartphones and cameras were firmly away when she spoke. The crowd, quiet but ready to laugh at Smith’s knowing, occasionally self-deprecating asides, was genuinely interested in hearing -and experiencing -new material from an old favorite, first-hand.

New memories are forged through this sort of event; the holy spirits of exploration, expansion, and inspiration ask us, as arts lovers, to go see and do something just a bit different, regularly, rather than live in the spin cycle of favorite playlists, repeated ad nauseum. It’s nice to revisit old times and places (and people) with a few clicks (or swipes), but I wouldn’t want to re-live those times, live, at any concert; a few well-chosen old nuggets are just right when placed beside newer, more unfamiliar material. There’s always a wealth of new memories being  created -sometimes it’s new sounds that give them the nudge into creation. More than ever, I want to celebrate that creation.