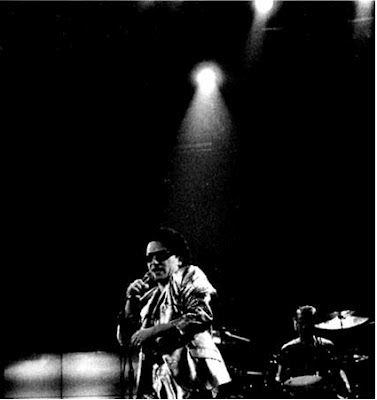 The desire to be accurate with anniversaries and remembrances grows over the years. When you don’t have kids or a partner to mark time for you with loose teeth and grey hairs, odd drawings and fancy diplomas, you have to choose other markers.

Twenty years ago I trundled off to Maple Leaf Gardens, then a rattling old hockey arena for a hard-scrabble team, for a rock concert. There were cars hanging from the ceiling. And screens. Lots of them.
I’d been leafing through Orwell, gawking at Egon Schiele and Gustav Klimt, sitting googie-eyed at the movies of Marlene Dietrich, and enchanted by the music of the Weimar republic. I’d been letting Ziggy Stardust and Kraftwerk lull me to sleep and jotting down strange thoughts and abstract shapes in journals spread across wooden floors alongside plates of half-eaten baguette and unfinished essays.
It’s okay if you don’t have a computer, the teacher had said, not everyone does. Just print neatly and it’ll be fine.
I trudged up the stairs of the Carlton subway stop to be confronted with a choir of rosy-cheeked faces.
‘Tickets! Anyone selling? Anyone? Please?’
I walked through the masses, hands stuffed in deep, smooth winter pockets.
‘You selling?!’ a swarthy, balding, wild-eyed man asked me as I reached the top of the stairs.
No way, I told him.
‘Come on. Give you a hundred bucks.’
No.
I hadn’t even seen the band inside, but something in me said… go.
The lines for the loos were ridiculous. The lines for a bottle of water were ridiculous. Four dollars? Ridiculous. I was used to the concert hall, Lincoln Center, Roy Thompson Hall, Jesus, why was everyone pushing and shouting?
Settling in, I noted my side-view of the stage. The myriad of screens and cars and metallic pieces of spaced-out junk, poked out hither and thither, at all angles, like Picasso came to life via Flash Gordon. Oh. Was this supposed to be art? MOMA did it better.
The Pixies took the stage. I made a face. Who is this? God, that guy’s ugly. I thought about Pavarotti and Ziggy Stardust and the essay I was writing for Classics defending Clytemnestra. Really, she was the victim of historical sexism, and I had to set things straight, between bites of brie and glances at Ginsberg.
The Pixies left, I sighed with relief, my seatmate got popcorn. I doodled in my chip-faced journal. Time passed. I jotted down potential screenplay ideas, and put the journal in my backpack, where a copy of Naked Lunch was tucked away. It made no sense, but it made the clang-clang-clang of the subway easier.
My seatmate and I munched the popcorn, laughed at people’s hairdos, picking our teeth and gossiping, trading ideas and avoiding the yawning reality of graduation. He crumpled up the empty bucket and whipped it under his chair, ever-polite with a jaunty whistle and a bright-eyed grin.
I looked at the stage, and noted a small man wandering onto it. He wore dark over-large sunglasses, tight black leathers. He was looking around, curious, head cocked and smirking. A few people shrieked. Then a few more. I cocked my head back at him. Such a big head he had. Such big dark hair. And such big glasses. The arena was in an uproar. Oh? The show’s starting now?
It’s Jesus, I whispered sarcastically to my companion. He’s gonna save us all. 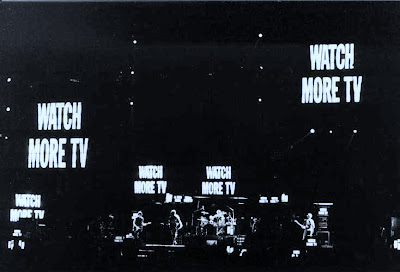 For the next two hours, I was witness to a marriage of words, music, ideas, art, sound, performance, and sheer theater such as I had never seen before. The snarling menace of “The Fly,” the shimmering sex of “Mysterious Ways,” the barking outrage of “Bullet The Blue Sky,” the shiny grandiosity of “Desire” … it was hard to verbalize what I was seeing… feeling… it was hard to take in, all at once, in one go. Jesus staggered along the outer rim of where the glass would be placed for hockey games, holding hand after hand after hand for support, a tiny smile spread across his lips. He reminded me of Dennis the Menace.
If you twist and turn away…
If you tear yourself in two again…
He was ridiculous -utterly ridiculous – but a very magnetic, theatrical presence. I was transfixed.
In 1992, I had no idea who Jenny Holzer was, or Mark Wojnarowicz, or the Emergency Broadcast Network. I’d vaguely heard of televangelists and had seen pieces of Apocalypse Now. I was months away from graduating high school and had a creative writing teacher who took students outside to a nearby cemetery for inspiration. I’d been to New York a dozen times and had hit all the major museums. I’d seen Pavarotti sing live in a few operas and eaten at top restaurants. But I’d never seen anything like this. Jesus was thrusting around in a silver suit, throwing money at the fawning crowd. Good grief.
ZOO-TV was a sexy, scintillating, stimulating soupcon of pop culture references both contemporary and classical, one that licked the brain cells even as it caressed the heart muscles in a winking, wide, over-friendly love embrace. I felt drawn to a life and way of thinking I’d only glimpsed at in all my trips to New York and Europe: it was full of arts, smarts, sauce, spice, and ever-present sex, wafting and floating above all things, its power only heightened by the intense, naughty mambo it held with a force equally as strong: love. Love for music, art, living, performing, the being-there-ness of the moment. All that stuff I’d been touching on in my Orwell-Burroughs-Kerouac-Ziggy-artsy-fartsy explorations. Authenticity as way of life. Authenticity as mask. Know who the hell you are… then play with it. Fuck up the mainstream. 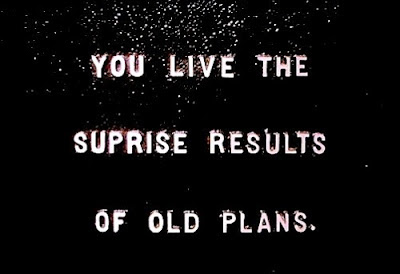 It’s said this tour re-defined what big bands are, what they could do, who they could be, and how far they could reach. And that’s all true, but such an assessment misses the profound personal connotations. For me, ZOO-TV will always be a bigger thing than a tour, a band, a t-shirt, tons of gear, clever sayings, or flashy effects. It remains a marker, a compass, a talisman, a confusing pregnancy and messy birth, a shocking awakening to a wider world both without and within. It was grand opera and the intimate whisper ever. It was the absolute end of one phase, and the start of something much greater, far wider, unimaginably deeper, and vastly more frightening. And maybe, possibly, more thrilling. Welcome to your life; it’s all up to you now.
I go to encounter for the million time
the reality of experience
and to forge, in the smith of my soul,
the uncreated conscience of my race.
To all involved in ZOO-TV, directly and not: thank you, from the bottom of my heart, now and forever more. I remember, I smile, I dance.
I’m dancing barefoot
Heading for a spin
Some strange music drags me in
makes me come up
like some heroine…
(Quotes: James Joyce; Patti Smith)
Photo credits: Top, via cinesonic; middle via Democratic Underground; bottom, artwork by Jenny Holzer via Walk With The Crustaceans.
1992ClytemnestraEgon SchieleheartJenny HolzerliveMaple Leaf GardensNew YorkPavarottipop culturereminiscencerock and rollsexteenTorontotourU2ZOO-TV

I Get So Emotional, Baby