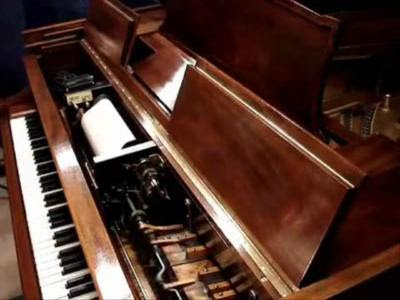 I don’t miss playing the piano. But I miss having a piano.

It was no easy thing to grow up in the shadow of a violinist and band leader, watched over by an opera aficionado, mocked by a large, grand piano parked like a monolith in the living room, its white and black keys jutting out like jagged, menacing teeth.
You don’t know what you’re doing! it always mocked, You’re just reading what’s in front of you! Anyone can do that!
Seeing 2 Pianos 4 Hands was an exercise in nostalgia. With its review of time signatures and keys, its lines about semitones and a syllabus, its portrayal of the dreaded Conservatory exams, the show, produced by Mirvish Productions and currently on at Toronto’s cozy Panasonic Theatre, gently, humorously reminded me of all the things I hated about my piano-centric past. When I began lessons at the tender age of four, I only knew it was fun to sit at a keyboard and go plunk-plunk-plunk. Over time, I derived a certain smug satisfaction from deciphering little black marks on a page. My considerably more-musical best friend across the street would come by and rock my staid classical world with his off-the-cuff, fast, fun, boogie-woogie improvisations and fancy-dancy pop tunes new and old. It irritated me because not only did it mess up the organized world of Bach, Beethoven et all the RCM presented, but it reminded me of what I could not do: play something fun, straight out of my head, without any little black squiggles for guidance. Music has an important role in my life, but it’s not an artform I can actively be a part of, because I am critically lacking in the one thing you need to make a go of it: real musical talent. 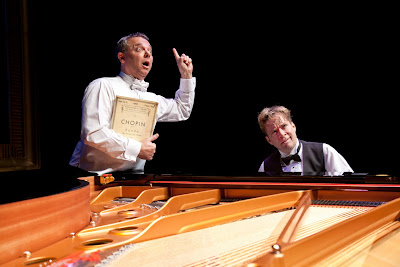 It was when I dropped formal music lessons that I realized visual and written arts come far more naturally to me than sonic ones. Writing, drawing, and photography are work -sometimes torturously so -but the kind of work I enjoy. I don’t revel in failure so much as get nervous at the prospect of throwing all my dirty laundry out for public scrutiny. It was bolstering, then, to see two men who, for all their success in other artistic disciplines, willingly reveal their shared failure at being full-time professional musicians. Ted Dykstra and Richard Greenblatt, 2P4H’s co-creators, are good at a lot of things, mainly within the realm of performance -that includes acting, directing, writing, and yes, lots of very-able piano-playing. A pair of Horowitzes they are not, but then, that’s just the point. Not everyone can -or should -be.
2 Pianos 4 Hands paints a portrait of artistry frustrated by the relentless slings and arrows of reality. The show was first performed at Toronto’s Tarragon Theatre in 1995, and has since gone on to play over 175 different theaters worldwide, including a six-month run at the Kennedy Center in Washington. The production is simple, with two huge grand, Yamaha pianos facing each other, and the leads kitted out in formal suits (including tails) and alternating characters: piano teachers, parents, their disgruntled childhood and teenaged selves. What could easily slip into saccharine territory comes crashing back into the sour zone, thanks in part to the duo’s finely-tuned sense of timing. Moments that could be difficult for non-classical music lovers to stomach (young Ted’s swooning over a live recording of Vladimir Horowitz at Carnegie Hall, for instance) are quickly given necessary shots of levity (an eyeroll here, a shrug there), elements that work in tandem with the innate chemistry between Dykstra and Greenblatt. The trust they have, in each other, the material, their abilities, the music, shows, and extends itself to both emotional scenes (like those involving a face-off between young “Teddy” and his strict father) and comedic ones (such as young Richard’s meltdown during a music competition), offering some far more than the warm-hearted fuzzies a memory show might imply. Artistic passion and brutal truths are dished out with equal vigor, making the final scene -of the two playing J.S. Bach’s Concerto in D minor, 1st Movement -all the more poignant. With the two pianos joined in one fussy piece of Baroque splendor, the line between music and theatre is rubbed away, with performer and performance becoming one expression of frustrated dreams, of altered plans, of new awakenings. 2 Pianos 4 Hands is one of those shows that makes you think, and feel, and remember, and hope, all at once. No small feat. 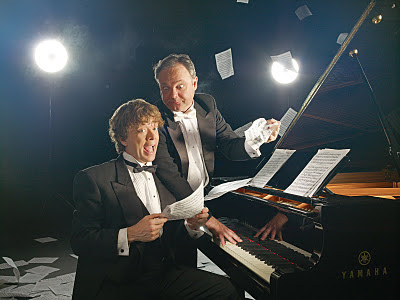 My child-like urge to plunk around on the keys bubbles up every now and again, minus the heavy weight of classical-music education squashing my innate creative curiosity. That’s the spark of where all my artistic (and journalistic) pursuits come from, after all- from that prickly-skinned, many-tentacled, multi-eyed, fast-swimming creature called curiosity. Part of giving in to that creature means enduring the occasional mental shit-kicking to keep at it, to commit, to sit in the damn chair until it’s done, and to go deeper and reach higher and be better. But what if you hit the glass ceiling? What if there is no “better”? Coming face-to-face with that reality is no easy task; acknowledging it in public, in front of a group of strangers, in the dark, on a stage, every night can be downright terrifying, a horror show of the highest order. But risk is good, and, in the realm of the arts, an absolute necessity. Risk keeps curiosity happy and alive. Kudos to Dykstra and Greenblatt -and to all the frustrated artists. Thank you for putting your risk on display. We hear, we paint, we write, we read, we see. Thank you for taking that risk. Thank you for the music.
Photo credits:
Top photo, Wikipedia.
Middle photo by Rick O’Brien.
2 Pianos 4 Hands photos courtesy Mirvish Productions.
2 Pianos 4 Hands2P4HKennedy CenterMirvishpianopiano examsRichard GreenblattTarragonTed DykstratheaterVladimir Horowitz