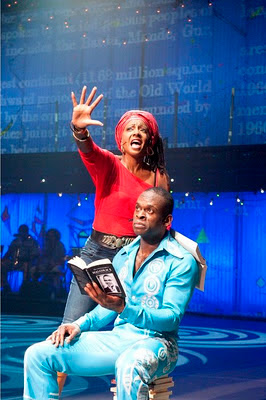 A recent blog post on the organization A Work Of Heart was met with huge interest, and proved very popular across the internet. People applaud the marriage of creativity and commerce, because it doesn’t smack of the patronizing attitudes that so often dominate the conversation around aid.

Far too often there is a kind of smug arrogance over the role one may’ve played in some do-good initiative or another; one becomes more interested in our laser-pointed act of generosity to The Less Fortunate (who always, it must be said, remain nameless and faceless in their poverty) than in providing empowerment to achieve a livelihood not unlike our own. Western aid is often characterized by an agenda of righteousness, utterly lacking in awareness of history or culture. Self-empowerment, self-determination, responsibility and accountability… what’s that?
FELA! may have some answers. The mega-musical, produced by Jay-Z and Will and Jada Pinkett Smith, revolves around the life and music of Nigerian artist Fela Kuti. While Kuti may have passed away in 1997, his work -and the show itself – underlines his political and artistic legacies for audiences, both white and black, Western and non-Western, in the 21st century. Kuti’s life revolved around politics and art, the hows and why and wherefores of the two intersecting, and the power created therein to affect real change, both in his short time on earth, and past it, for all time, for all Nigerians. Kuti’s sound is a musical smorgasbord of influences; he liberally mixed the sounds of indigenous African beats (namely Yoruba drums) with big American-sounding horns and twanging James Brown-style guitars. His work even betrays Middle Eastern influence; there’s a distinctly Klezmer mood in “Mr. Follow Follow” mixed in with the funky beats and bleating horns.
In FELA! the songs as used both as plot points and party anthems, and perhaps, both; the party becomes political, and the political becomes a party. “Water No Get Enemy”, “Expensive Shit” and “Zombie” are seamlessly interwoven throughout the piece, providing dialogue and narrative drive, along with groove and timeliness. The work may take place somewhere around 1977, but FELA! is less a period piece than it is an evocation of the power of music to empower a people and a nation. One nation under a groove, indeed. 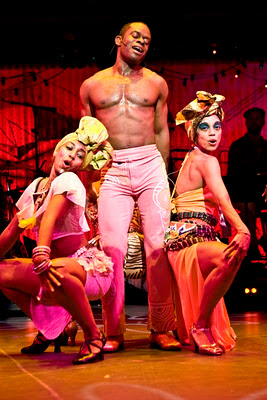 Groove isn’t something that Toronto audiences immediately respond to in the theater, however. FELA! opened at the city’s Canon Theatre at the end of October, brought to Canada by Mirvish Productions. The show’s charismatic lead, Sahr Ngaujah immediately sensed some Canadian shyness during a recent Friday night performance, and he wasn’t pleased. The accomplished build the energy, doing call-and-responses, storming off the stage James Brown-style, and getting us on our feet to dance. Ngaujah also showed off his able improv abilities when, during one of his character’s asides chatting up the wonders of igbo (or marijuana), an eager audience member shrieked “Pass!” as he lit up what looked like a gigantic joint. Ngaujah looked up with a wicked smile, clearly delighted, and began riffing on the ups and downs of reefer-sharing. It was a warm, off-the-cuff moment that underlined the human heart beating at the center of FELA! as well as the steely resolve of its title character to play by his own rules, come hell or highwater.
As in Kuti’s life, the enemy in FELA! is the violent Nigerian government of the 1970s (and arguably, beyond that time period). On a larger scale, it attacks the endemic corruption of worldwide governments by corporate interests. The decision to have an unseen enemy, rather than actual physicalized figures, renders their evil deeds -the rape of Kuti’s “Queens”, the murder of his mother -more horrific, even as it solidifies Kuti’s defiance. Giant screens on either side of the stage portray various shots from the time and from the musician’s own life; scenes of mobs, arrests, beatings, of newspaper headlines, of shots of Kuti’s compound and The Shrine (the interior of which is the setting for the musical itself) provide a history lesson, but it’s wrapped in the pulsing sound of Afrobeat, the sonic hybrid Kuti pioneered and perfected. The production’s onstage band, including the talented Morgan Price (who does tenor sax solos) ups the energy ante, and provides able solemnity where needed. Captivating performances by the work’s female leads balance out the machismo. British actor Melanie Marshall does a stunning turn as Fela’s mother Funmilayo Kuti, her coloratura soprano soaring as she inspires her son even past the grave. L.A.-based actor Paulette Ivory is a force of nature as Sandra, Fela’s American wife. Whether she’s standing with hand on hip, head cocked, or belting out “Lover” in her strong pop-inflected voice, Ivory’s presence is, as we suspect with Sandra, one to be reckoned with. 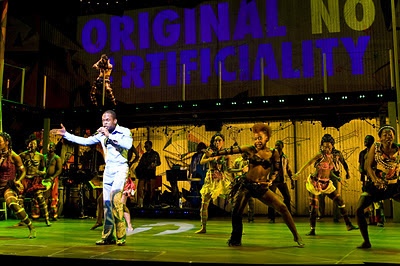 Interestingly, Toronto critics, amidst their praise of the popular Tony Award-winning work, noted the lack of portraying Kuti’s polygamy, and the fact FELA! is lacking in physicalized bad guys – but those criticisms ignore what this work is really about: one man using his art to fight for change. The finale encapsulates the twin impulses toward art and politics that characterized Kuti’s life, combinining his untimely passing with that of other key political figures. It’s eerie -and eye-opening -to witness coffin after coffin being carried onstage and piled artfully in one corner, each coffin bearing the name of either a murdered figure (like Ken Saro-Wiwa), or a company (like Shell Oil) who must die so that The Shrine (aka Nigeria) might live. One understands more clearly the legacy Kuti left, not only for his own country, not only for his fans, but for people who are fighting for justice, dignity, empowerment, and respect.
Those issues are crystalline in their presentation, but they aren’t delivered with any didacticism or smugness. FELA! is too smart for that. Instead, the show is education via entertainment, enlightenment through electrical musical energy. The Torontonians at the Canon knew some of the songs, and could be heard (softly) singing the words or humming along. The subtext was understood, but they couldn’t help but get lost in the music. That’s the power of art, well done and well-executed. If only this marvelous Mirvish Production was playing longer than two weeks -this is precisely the kind of entertaining, electrifying, timely programming Toronto theatre needs. If you’re in the polite Canadian city, make time between now and Sunday (its closing day) to see FELA! -and make sure you shout, dance, and make noise. Not to be charitable – just because it feels so damn good.
Photo credits:
Top photo: Paulette Ivory and Sahr Ngaujah by Tristram Kenton
Middle photo: Catherine Foster, Sahr Ngaujah and Nicole de Weever ©Monique Carboni
Bottom photo: Sahr Ngaujah as Fela Kuti and the Broadway cast of FELA! ©Monique Carboni
African artistsAfrobeatcoloratura sopranoFELAFela KutiFunmilayo KutiJay-ZKen Saro-WiwaMirvishmusicalNigeriaNigerianShell oilThe ShrinetheaterTonysTorontoWill Smith