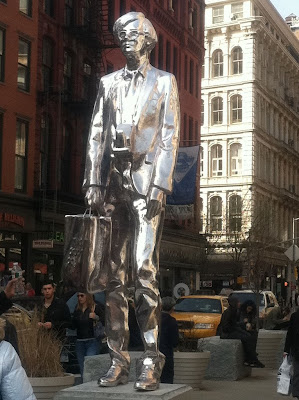 Life has a way of turning out exactly like you didn’t plan. And yet it’s through the labyrinth of choice that we arrive at a new destination.

I made a big choice a few weeks back, and am still living with the reverberations. As befits my culture-vulture tendencies, I tend to turn to art as a means of trying to comprehend (or at least accept) the power of my choices. Lately Andy Warhol has been a big inspiration. He knew his worth as an artist and a contributor to cultural conversation, and understood the exchange that happened (monetary, mainly) was a result of a larger system that he not only milked beautifully, but understood more keenly than many other cultural figures, even now.
Maybe part of my inspiration is derived from the bright yellow poster for The Andy Monument hanging on my fridge. When I look at it I remember first catching sight of Rob Pruitt‘s gorgeous monument to Andy Warhol in Union Square just steps from where The Factory was once located. It was a mild, breezy day, and the public space heaved with Saturday shoppers and curious tourists who would approach the silver-chrome statue slowly, eyebrows scrunched and head cocked, camera-phone on the ready. Some people knew who it was, some didn’t, but most people were in awe of its sheen, its shine, its winking, blinking surface that glinted and glowed in the late afternoon sunshine. Some posed beside the monument; others clicked away, but it wasn’t a manic picture-taking frenzy like you’d see beside other statues of famous people.
In the weeks since, people have been leaving Brillo boxes and cans of Campbell’s soup at the statue’s feet, which feels like a fitting tribute. The frenzied retail activity that happens around the statue feels like a more apt honor, but, for all his love of mainstream culture, Warhol doesn’t command the same level of frenzy as, say, the Sistine chapel. In many senses, he defined the way we understand, perceive, and experience mainstream culture in all its bawdy, gaudy glory, and is so steeped in every aspect of our modern being as to be indistinguishable from it. 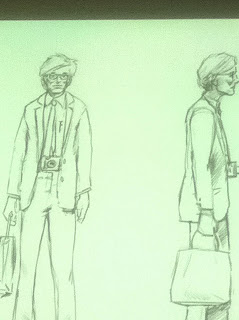 His influence was examined last month at a chat held by the Public Art Fund (who are behind the Warhol statue) at The New School. With artist Rob Pruitt present, the panel, comprised of artist/writer Rhonda Lieberman, cultural critic Wayne Koestenbaum, and Public Art Fund Director/Chief Curator Nicholas Baume, discussed Warhol’s significance and offered their own memories of the famed master of cultural collection and distillation.
While Baume and Lieberman offered heady, thought-provoking deconstructions of Warhol’s work, and Kostenbaum gave a cool, Beat-like remembrance befitting his poetic background, Pruitt’s tribute was halting, shy, and entirely unplanned. His palpable nervousness was a charming touch to the (all-too-brief) details he gave regarding the process of creating the statue: an assistant did a preliminary drawing (which he confessed to disliking), his art-collector friend modeled (right down to the wig), the statue is hollow, a chrome coating was a natural choice. He also shared his delight at the effect the statue had upon its unveiling in late March. When questioned about Warhol’s influence on his work, Pruitt asserted the ubiquitousness of the artist’s reach, noting the difficulty of parsing things as “Andy” or “Mine,” especially in this day and age of unoriginality-as-the-original-art-impulse. Pruitt also shared a wonderful personal story that, even now, a month on, continues to inspire delight and awe.
When Pruitt first moved to New York as an aspiring artist in the 1980s, he had a dream of working at The Factory. He rang the buzzer of the famed building, introduced himself as only a confident young man can, and, amazingly, was allowed in. He met Warhol, who explained his duties as an unpaid intern between questions about Pruitt’s background as an ice cream scooper at Baskin Robbins (apparently the artist thought Pruitt could get them tons of free ice cream) and fielding dozens of inquiries from his Factory worker-bees. Pruitt recalled the experience with saucer-eyes, before confessing that he didn’t take the internship: “I had to make money.” He took a job in the glove department of Macy’s, something that, according to Koestenbaum, “Andy would’ve respected more.” 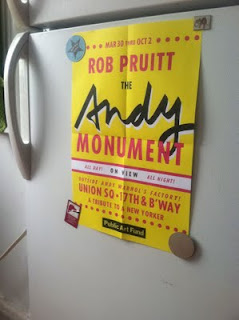 There’s something curiously inspiring about this story. It got me thinking about the value we place on our activities, especially in the age of digital, where (especially as writers and artists) there is an expectation of “free” -a culture that has become a kind of monstrously growing pudding, one that keeps being fed by people who should know better. Whither worth? Everyone has to make a living -and has a right to. It can be, as Warhol serves to remind us, mundane, fantastical, or a mix of both (proudly), but we live in a culture where money is a vital form of energetic exchange. Those 15 minutes aren’t enough -you should either make money from it, or pay for it. Right? Wrong? It’s worth pondering, especially in an age where we choose to take and give things -talents, time, energy -without a thought. I wonder what Warhol would say.
Change. Choice. Art. Energy. They all seem linked, more than ever.
choicefamemoneyNew YorkNicholas BaumePublic Art FundRhonda LiebermanRob PruittstatueThe FactoryUnion SquareWarholWayne Koestenbaum