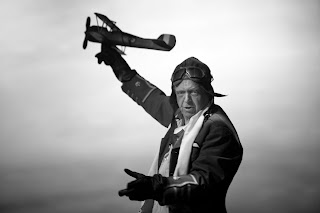 I only knew Billy Bishop‘s name -the fact he was a World War One ace flying pilot, the fact was Canadian. I didn’t know anything else. Lessons learned in grade nine history have long since faded and all that’s left are the names, really. If you put a photo of Bishop in front of me, I probably wouldn’t recognize him.

Eric Peterson and John Gray take this into account. Their 1978 theatrical work, Billy Bishop Goes To War, has something for both the history buffs and the ignoramuses -it’s educational and simultaneously entertaining, engrossing, and deeply moving. Peterson, best-known among a generation of Canadians for his television work (on shows like Street Legal, and more recently, Corner Gas), has always done theatre, as he told me recently. Toronto’s Soulpepper has snagged him, fortunately, to be in a number of their show this season -including a devastating turn as the super-desperate Shelley Levene in Glengarry Glen Ross this past winter, and a befuddled, mourning uncle in Of the Fields Lately. Last year he was the menacing, coolly cruel patriarch in The Company Theatre‘s production of Festen.

So Peterson isn’t just the cutesy-grumpy guy you might know from television -the guy has range. He is also a wonderfully engrossing performer. For the length of Billy Bishop’s running time (over two hours, with one intermission), he, along with just the accompaniment and occasional narration of co-creator John Gray, weaves a compelling, fascinating portrait of a multi-layered man nearly forgotten in the sands of time.

Billy Bishop (for those of you who’ve forgotten your history lesson) was one of the most decorated Canadian soldiers of the First World War. A classic screw-up at home (in school and in life), Bishop was shipped overseas when he was conscripted. He started out in the cavalry, and eventually soared -literally and figuratively -as a member of the Royal Air Force, and is credited with an astounding 72 in-air victories. The piece aptly expresses Bishop’s doubts -in himself, his mission, his superiors -and Peterson is effective in conveying the nervous energy of a man at odds with himself and his times. He also neatly portrays the growing contradictions within Bishop’s personality: the bloodthirsty hero of the sky, versus the awkward, goofy Canuck kid. 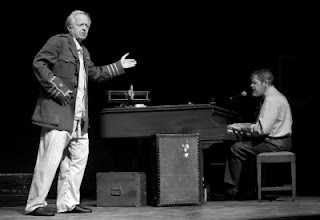 My seatmate, who is in the army reserves, was in awe at the combined efforts of Gray and Peterson to weave a compelling, moving story out of such simple elements, as was I; with just a few trunks (marked from the locales the show’s played in), as well as toy planes, an armchair, some old photos, an army uniform and a piano, the pair magically transport the audience to the interior of a man at odds with himself and his place in history. Gray provides some nice low-tech sound effects -heavily breathing into his mic at points, pounding out morose-sounding chords at others -while Peterson demonstrates Bishop’s incredible airborne feats through sheer physicality, standing on the arms of his easy chair, arms aloft. What makes the piece particularly interesting is the fact it skips between time periods, allowing for an elastic understanding of history and our place in it. When the show first starts, Peterson and Gray come out, ostensibly as themselves, taking bows, but with the former dressed in pajamas and slippers, it’s as if Peterson is aware he’s playing Bishop reflecting back on his life -and on a younger self (actor and serviceman) most of us can relate to -medals or not.

Billy Bishop Goes To War is more than a simple history lesson; it’s a meditation on the nature of conflict, within and without, on the idea of freedom, intimate and epic, on the terrain of country, physical and emotional. Together with director Ted Dykstra, Eric Peterson and John Gray have crafted a moving, memorable piece of theatre that moves far beyond names, and yet, I came away with a whole new appreciation of Billy Bishop, and indeed, of Canadian history. Bravo.