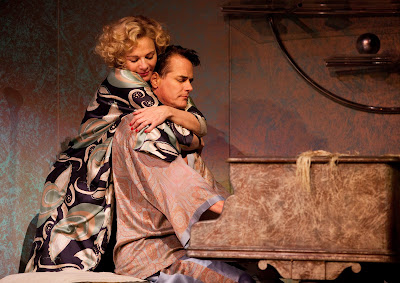 The blonde woman behind me, in a black and white mini-dress several sizes too small for her frame and with towering hair that whispered of Moroccan oil and synthetic extensions, decided the time was right to voice loud opinions just as the lights went down.
“Why are they clapping?” she hissed as the over-eager audience broke out in applause when leads Paul Gross, and then Kim Cattrall appeared onstage.
“Shhhhh,” urged her suited, slick-haired seatmate.
“What?!” she continued, “They’re just onstage.”
“Ssssshhhhhhhh,” he continued, with some alarm.
“I mean, Gawwd, calm down, people,” she continued, unabated, “They’re just actors.”
“C’mon, it’s starting.”
“What?! People clapping? Jesus. They’re not in a marathon or something.”
Aren’t they? I wondered, smiling.
She finally shut up so the show could start, but it got me thinking. 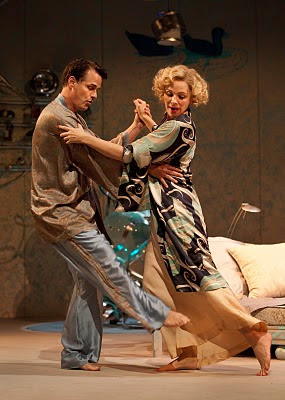 Playing Coward is a kind of dance; doing him well is more of a marathon – albeit a well-dressed one involving martinis and silk pajamas and many, many well-placed, well-timed words. Cattrall and Gross are locked in a thrilling two-hour marathon of wills, hearts, words, and energies. This is possibly the most competitive production of Private Lives I’ve ever seen, and that’s saying something; I’ve seen this particular play well over a dozen times, on a few continents, and each time I’ve taken something a bit different away – but all those variations doesn’t erase the delicious rhythm of Coward’s words, nor his brutal portrayal of the chattering, wining, dining, whining, whipping, slipping, shouting, punching upper classes, and their awful, awfully funny, awfully familiar way of living and loving.
Richard Eyre’s lush production, currently running in Toronto through the end of October, was last seen in London’s West End. This Canadian run is a warm-up for the Broadway run that begins in November. New York audiences would be wise to put aside their notions of Coward as a pish-posh playwright full of puffery, and pay close attention to the vital physicality Eyre brings to the 1930 work. Private Lives revolves around the quarreling, querying, cooing, cuddling, and wholly caustic exes Elyot and Amanda, who run into one another while each is on their respective second honeymoons. Words and fists fly back and forth with equal vigor, making for an engrossing production that milks the gender wars while highlighting the importance of flippancy through deft timing and clear body language.

“Is all this sophisticated, feckless, irresponsible flippancy the stuff that will endure?” asked Tatler after the play’s 1930 premiere. Of course it has. Irresponsible flippancy will endure, has endured, and in so many ways, should endure. Private Lives is as known for its barbed witty flippancies, flung back and forth like jaunty shuttlecocks, as it is for its depiction of scary co-dependency in intimate relationships. Coward is a master of flippant verbiage, holding a brutal, dark mirror to the creme fraiche of everyday experience, exposing the rotting fish-smelling underbelly of polite society with a smile, a martini, and an invitation to dance amidst the detritus.

It’s important to keep this delicious sense of expose in mind when watching Eyre’s gorgeous, glimmering production. Set and costume designer Rob Howell’s tidy, boxy balconies of the First Act’s honeymoon scene are simply too polite, too neat, too orderly, for Coward’s co-dependent heroes. Their wrought-iron-meets-greenery nicety can’t contain such volatile lovers. The huge, circular Parisian apartment where they escape is equally telling in its beautiful design; it implies the maddeningly cyclical nature of their relationship, one marked by vigorous, fighting, freaking, and… well, you might fill in the blank. Amanda (Kim Cattrall) and Elyot (Paul Gross) are like the yin and yang of an angry, amorphous amoeba that, between sips of martinis and champagne, screeches I love you/I hate you even as the creature – this monstrous thing called a “relationship” -swallows itself whole, dividing, again and again, into something we all wish we didn’t recognize.
So where’s the relief? Ah, that’s easy. The vitality of flippancy is what powers much of Coward’s work, and it has its very-best, most shining, flouncy display and expression in Private Lives. Flippancy’s souffle-like texture is sometimes a better balm than the soggy bandage of dew-eyed, saccharine sincerity. As Elyot notes, “All the futile moralists who try to make life unbearable. Laugh at them. . . . Laugh at everything, all their sacred shibboleths.” Private Lives wants you to be laughing at the absurd. It demands it. Even when Elyot and Amanda leave their respective mates and vanish into the night… laugh! When they worry over their respective mates’ well-being and wind up making love… laugh! When Elyot strikes Amanda and she strikes him back, without restraint… laugh! Laugh!, the work dares us, voila, shibboleths! Encore, rire!
That isn’t to say domestic violence is ever hilarious or not a thing to be taken seriously, but it does ask the viewer to confront the sacred cows that amble across one’s perceptions of propriety, comedy, relationship and romance, and whence they all doth meet in the dark alleys of life. Such presentation also calls to mind the possible literary inspirations behind the figures of Elyot and Amanda. The play is a puffy, meringue-like counterpart to the heavy steak of other dueling-couples works; their leads the sweet profiteroles to the sour pickles of George and Martha, their verbal wordplay is no less clever than Beatrice and Benedict. There is most certainly a palpable sense of competition between Cattrall and Gross, one that informs and powers much of the energy behind this particular Broadway-bound production. 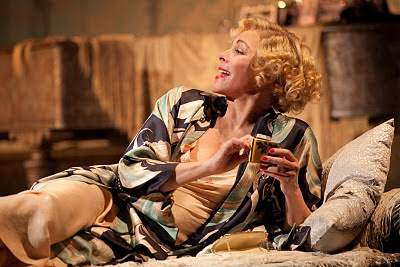 Of all the memorable Elyots I’ve seen – Anton Lesser in London, Alan Rickman in New York – Paul Gross’ interpretation is easily the most brusque. His Elyot seems entirely disinterested in the niceties of civil society, and engages in them only so long as they amuse him, or those around him. The dark violence of the character is underlined with Gross’ deeply physical performance, as he throttles Amanda in the Paris apartment where the newlyweds escape to reunite with one another. It should be noted, Kim Cattrall’s Amanda gives as good as she gets; hers is an equally brutish interpretation, and put beside Juliet Stevenson and Lindsay Duncan respectively, is easily the most masculine of Amandas. Oh sure, Cattrall charmingly swans about, first in a towel, then a gorgeous flesh-tone gown, then a swishy silk robe, and finally a prim, fitted skirt-suit – but these are all feathers on a wolf. As the play progresses, Cattrall spits out her lines with such a crescendo of venom you begin to wonder if she’d be better suited to the boxing ring. When Elyot berates her for promiscuity, pronouncing that it “doesn’t suit women,” she retorts, in full eff-you mode, hand on jutted-out hip, that it doesn’t suit men for women to be promiscuous. There was more than a small hint of Samantha in that line, the character from Sex And The City Cattrall is known for, and the line itself received a hearty cheer at the opening. One senses Cattrall’s Amanda is promiscuous less out of sheer lust than out of sheer rage at being born the wrong sex. Vengeance drives her much the same way it does her (ex-ish) husband, but she expresses it more through well-placed words and large physicality than in actions.
Indeed, flippancy is what makes the hurtful, hilarious, the painful, pleasurable, the unbearable, bearable. Richard Eyre’s production of Private Lives reminds us of this wisdom in bouts of brilliant shallowness and bold declaration. Much more than a writer of witty sex comedies with well-dressed people sipping martinis, Coward’s work is a witty sex comedy with well-dressed people sipping martinis -and saying really, really smart, wise things. Pay attention to the language, and how it’s used: to soothe, seduce, insult, insinuate, degrade, debase. Rarely do we see polite society reflected with so much venom; even more rarely do we see it dressed so well, and so heartily applauded by those who are being mocked.
I emerged from the Royal Alexandra Theatre thinking that we all probably have a bit of Amanda and Elyot about us. The couple behind me had taken off early -presumably to fight, to love, to spar with words and fists and flying drinks. In short, to live another day. Hopefully with a sense of humor, and always, always well-dressed.
All photos by Cylla von Tiedemann, courtesy Mirvish Productions.
flippancyflippanthumourKim CattrallMirvishNoel CowardPaul GrossPlayPrivate Livestheater