Rumbles In The Barnyard 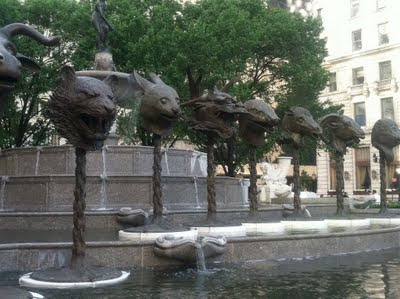 When WNYC announced the removal of Ai Wei Wei’s Zodiac Heads at the Pulitzer Fountain recently, a wave of shock went through me. Was it government-related? Part of some nefarious plot? No, it turns out the time of the Heads was up and they were off to their next destination in Los Angeles.

All good things, it seems, must come to an end, and sometimes those endings aren’t as dramatic as we initially believe them to be.
A week tomorrow, I’m going to be returning to Toronto. The reasons are, I suppose, somewhat dramatic; I’ve a family member undergoing a third round of chemotherapy, and I’ve been unable to secure reliable, paid, full-time employment here in New York. Much as it’s horribly depressing in the most theatrical way, it is also hugely, soothingly logical. Emotionally, I’m pulled between falling into a huge vat of overheated self-pity and rising above it all in the cold, clear knowledge that this could very well be the sort of vision-over-visibility issue I’ve been rattling on about for a while now.
Consequentially, Ai Wei Wei’s Zodiac Heads have been on my mind a lot. The first time I saw them was entirely intentional, while the second time I had an appointment locally, and the third was totally by accident. Each time, I observed the people there, laughing, posing for photos, snapping away blithely unaware of the plight of the artist behind the dead-eyed sculptures.
Each head represented an animal in the Chinese zodiac, and seemed to be innocuously bland and possibly, to quote an artsy acquaintance, too blatantly, inoffensively commercial to be rendered artistically interesting. But, in my mind, the placement of the heads said a lot about them, and one’s reaction to them. Sometimes the context in which an artwork is placed is nearly- or just as -important as the work itself, and in this, Zodiac Heads was certainly no exception.
The Pulitzer Fountain isn’t that hard to find -if you know where the Plaza Hotel is. And the world-famous Plaza isn’t hard to find if you know where Fifth Avenue is -that mecca of retail exuberance and commercial worship, that temple to spending and decadence. Emerge from the swirling heat of the New York City subway and you’re confronted with high-end (or wannabe-high-end) stores, tottering divas, ogling tourists, fast-walking assistants, immaculately-suited business men, and over-make-up’d teenagers. Ai Wei Wei’s Zodiac Heads was situated at the end of this zoo of humanity, where Central Park starts. 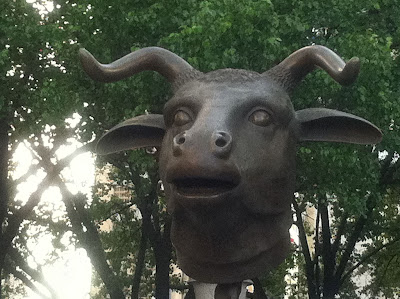 Far from being a simple “retail bad/art good” dialectic, Ai’s work has a whimsical, laughing quality that lives in perfect harmony with its darker undertones. There’s a hollow stare to these animals and their coy expressions; the pig head that was nearest to the Plaza has an eerie grin, while the rabbit head was benign if air-headed, and the strong ox looked dazed and overwhelmed.
Zodiac Heads’ proximity to the retail mecca of Fifth Avenue underlined the transactional nature of the art world, as well as its paradoxically community-building ethos. People who posed with the Heads may not have know who Ai Wei Wei is, but they certainly had fun with the heads – picking out their own animal, or, failing to know that, their own personal favorites. Acting as counterpoint to all this personalizing, the political (not to mention their historical context) can’t be overlooked. China’s economic relationship with the United States gains particular heft in such a commercial environment where transactions -whether in clothing or real estate -are a microcosm of not only trading relationships but of supply, demand, and ideas around credit and… owing.
To what do we owe Ai Wei Wei then? Or the Chinese government for freeing him? Anything? Ai Wei Wei’s recent release made me re-consider my own position as an artist -here in New York, and indeed, back in Canada. What is the definition of “home”? Where do we find ourselves, truly? To whom do we “owe” our freedom? I wonder how Ai’s creativity has been shaped by his captivity in his homeland and how much he’s been able to balance his need for freedom artistically with the rules around his release. When and if he figures it out, I’m sure the results will be spectacular. 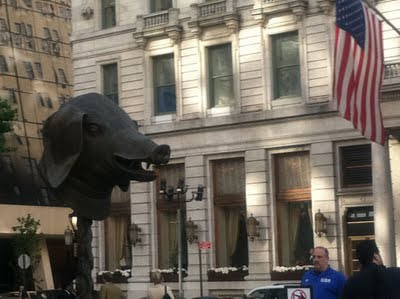 Until then, I’ll keep thinking about his Zodiac Heads. Sure, we’re free to figure out “sign,” but it remains to be seen whether that’s a sign in and of itself, or signifying larger connections and relationships, seen and unseen, real and unreal, factual or mythologized -and the nature of those transactions, their value in our lives, the payment they demand, and the freedom they do and don’t grant us. Does it matter? Should it? Some things are choice, others things are necessity; how we negotiate what’s in the middle is what makes us better artists -and human beings. Yes, we have an “animal” side, a side that wants glamour without the payback, fabulous without the bill, excitement without anxiety, success without responsibility. But remembering Zodiac Heads, I want to believe in more, in that ever-changing art of the possible. Now, it’s up to me to me to live it, and figure out my place in the stars -and here, in the barnyard of earth.
Photos taken from my Flickr photostream (lots more Zodiac Heads there!) …
Ai Wei WeianimalsChinaChinese zodiacdebteconomyFifth AvenueMade in ChinapaymentPlaza HotelPulitzer FountainresponsibilitysculptureThe PlazatradeZodiac Heads