Watching opera in a cinema is strange. Are you supposed to clap? Would it be weird? Can you talk? Can you eat popcorn? Would it be wrong to unwrap candies?

I got a mini-schooling in the un-fine art of opera-cinema-going recently when I attended a showing of Lucia Di Lammermoor, broadcast live from the Metropolitan Opera in New York, as part of their popular The Met: Live In HD Series. Candy-wrapping and cellphone talking aside (both are frowned on with equal displeasure -though I wasn’t guilty of either, honest), it was a mainly positive experience, marred only by poor directorial choices within the broadcast and incredibly dull color that washed out the set and beautiful costumes, making it a less rich visual experience that it should’ve been. 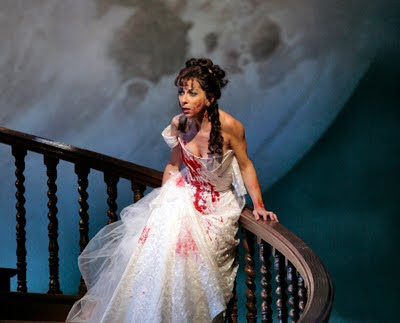 The story of Donizetti’s 1835 opera is based on Scottish writer Walter Scott’s eighteenth century novel The Bride of the Lammermoor, and focuses on the warring clans of Ravenswood and Ashton. Passionate, strong-willed Lucy becomes enamored of the penniless chief of a rival clan, but is forced to marry someone who’ll be good for the waning family fortunes, and subsequently goes insane, killing her groom and dying of grief. The novel is a long, drawn-out portrait of ancient tribalism set within a nasty, dark world of family and money; Donizetti and his librettist Salvadore Cammarano found rich, ripe stuff in translating Scott’s words to the stage.

In Mary Zimmerman‘s haunting production set in the mid-to-late 19th century, we find a world where everyone harbors a secret and is guilty of something, through their own actions or those of their ancient clans. Though the title character (the Italian-ized “Lucia”) secretly loves the worn family enemy, there is still a true innocence about her, a quality that was laid especially bare in soprano Natalie Dessay‘s emotional portrayal. Her delicate, bird-like frame was used to incredible effect, especially since she was cast with the tall, broad likes of tenor Joseph Calleja, as her lover Edgardo, and imposing baritone Ludovic Tezia as her brother, Enrico.

As might be expected from a Met production, the singing, along with Patrick Summers‘ authoritative conducting, were top-notch. It was, however, difficult to fully appreciate Mara Blumenfeld’s gorgeous costuming or Daniel Ostling’s deliciously creepy set design, owing to a woeful lack of brightness and clarity in the transmission itself. Whether a signal problem or a projection technicality, the lack of clarity and brightness greatly diminished the grandeur of the spectacle; colors were, for the most part, dull and dark. “High Definition”? Not quite. The scene in which Lucia is first introduced to her family-approved groom-to-be, Arturo (Matthew Plenk) found her wearing a detailed lace/brocade red dress -the only red in the entire color scheme of the production (not counting the bloodied wedding gown later on) -and instead of blazing out from the screen, it merely yawned in a dusty fuschia. We know the Scottish moors are muddy… but not that muddy. Hopefully the folks in Egypt, Spain, and Portugal got a clearer picture.

Equally, Canadian director Barbara Willis Sweete, who helmed the live broadcast (shown across 1500 cinemas in 46 countries, no less) focused too much by… focusing too much. It’s deeply unfortunate that the grand, creepy majesty of Zimmerman’s production was lost because of an over-emphasis on close-ups, weird angles, zooms, and fast (/nausea-inducing) cross-stage pans. (And apparently, I’m not the only one who’s noticed that tendency in Sweete’s filmed-opera work.) There were a myriad of poor and even bizarre choices, indicating complete over-excitement and/or absolute unfamiliarity with the material. It’s hard to say which, but in any case, it made watching Lucia di Lammermoor in a cinema a very taxing (and occasionally confusing) endeavor. 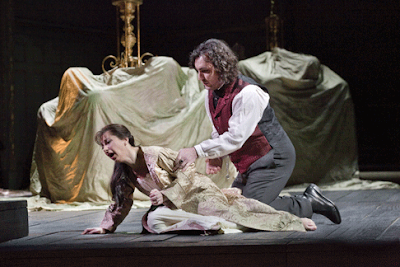 During the dramatic second-act showdown in which the desperate brother forces his grieved sister to sign a marriage certificate, Sweete jumped between close-ups of the faces of performers Dessay and Tezier; we had to guess at their emotional states, which, especially in opera, tend to make the most sense in a wholly physical (not merely facial) sense. Were they mad? Conflicted? Same with vital details: did the ring Edgardo gave Lucia get thrown? Where? Did Enrico step on it? Body language would tellingly indicate such vital subtleties and shifts, but we weren’t given shots that would indicate either communication (unsung) or clarity (contextually), just close-ups of scrunched-up faces. Wouldn’t a wide shot to show their (clearly symbolic) distance, with the occasional close-up for emotional effect, be a better choice? It would also render their disquieting, tender-passionate physical interactions more all the more visceral.

The emotional resonance of the scene, like many, became as muddied as the color, and it was an unfortunate distillation of the problem of bridging opera and cinema: keeping the idea of staging alive. Zimmerman offered an incredible vision of the opera’s famous Sextet, by having the fancily-attired guests assembled for Lucia’s engagement party (a gathering the nearly-broke Enrico has staged to re-enter society) fan around her as she sits, surrounded entirely by men, and readying their pose for a waiting photographer. An oddly-angled wide shot used in the Live HD Broadcast completely diffused the visual power of that moment -one that (probably) worked perfectly in a live setting. The staging was excellent, thought-provoking union of sight and sound that underlined Zimmerman’s themes of family, responsibility, femininity, and notions of success. It was a pity that high-point was diminished through poor cinematographic choices. 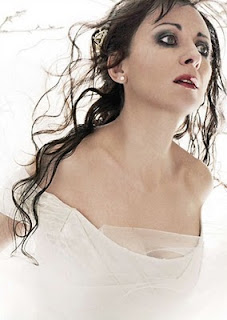 Watching Lucia di Lammermoor on the big screen, the word “staging” never seemed more apt. It’s unwise and perhaps even foolhardy to shoot something as a movie if it’s already been laid out for the stage. It winds up looking hokey and induces some unwelcome dizziness, particularly when coupled with poor picture quality. In the famous Mad Scene in the third act, the audience was treated to a close-up of a doctor readying a sedative to give to poor, raving Lucia. Having been mesmerized by Dessay’s deliciously delirious, and awesomely beautiful handling of one of the most difficult passages in the history of vocal music, our suspension of disbelief (and lovely musical hypnosis) was cut egregiously short, as we noted, in said close-up, the lack of actual syringe, or liquid, going into the needle, breaking the magic of the scene and the audience’s trust in what was being depicted. There are so many other cinematographic choices that would’ve better served the stage presentation and further accentuated the themes of Zimmerman’s production, but they were either not taken enough, or completely ignored in favour of a more “cinematic” experience. Alas.

The plus side to those litany of close-ups (and for theater-loving me, it was a big plus) was the opportunity to see operatic acting at work. Most performers I’ve interviewed have told me it’s dangerously easy to fall into the notorious “park and bark” mode; you simply stand and …well, deliver. Sweete’s over-direction, if anything, offered a rare opportunity to view those frequently taken-for-granted acting chops. When it came to the title role, I found Dessay’s absolute love of the part and history with the opera obvious in every single scene she was in. The French soprano lived the role, sometimes to Sarah-Bernhardt-eque heights, but kept intact an innate sense of “fragility” -a word she used frequently in her intermission interviews with soprano/host Renee Flemming. Her tiny frame and expressive face gave her the look of a wounded sparrow surrounded by hungry wolves -or in tenor Calleja’s case, a gentle bear with a very bad temper. 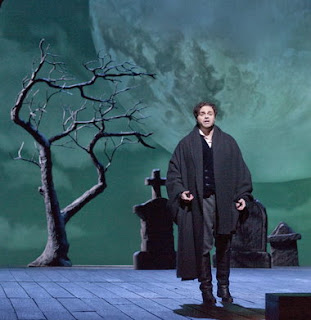 The Malta-born singer used his considerable physicality to display an awesome, terrible violence in the scene where his character learns Lucia has married another, clearing rows of chairs in one scary *thwap* of the arm -but he also displayed incredible vulnerability and despair in his final, famous death scene. Calleja has a Valentino-like range of emotional expressions that are perfectly suited to stage work; he plays joy, grief, anger, rage, and anguish large, entering one scene with a scary scowl, another with bright eyes and a broad smile. It looked silly close-up, and it wasn’t at all suited to film, but it fit the demands of the stage beautifully. And really, it was his voice that kept my attention, for it is, quite simply, astonishing. I’ve not heard that quality of tone since I sat in the Met and watched Luciano Pavarotti perform many years ago. Calleja certainly stands on his own as an opera star on the rise, but with a voice like that, comparisons to the Pav are inevitable -and right.

In the acting sphere however, French baritone Ludovic Tezia stood in direct opposition to Calleja, and, in my humble, non-opera-expert opinion, quietly stole the show. His was a nuanced, layered performance, displaying the kind of brewing rage you might experience before a huge, violent calamity. Tezia perfectly tempered his performance to the demands of filming, and while the audience at the Met may’ve suffered (you can’t see that kind of subtlety from the Family Circle), he was absolutely magnetic, his rich, caramel voice showing a remarkable range of color and feeling, his acting displaying a man at odds with his life’s choices. With a raised eyebrow, a cock of the head, widening eyes, or a slow raise of shoulders, the honoured French singer displayed a remarkably menacing subtlety that left a deeply disturbing, if sad impression of a man who, to quote Tezia (again chatting with Flemming backstage), was forced to bear too much weight on his clearly-incapable shoulders.I didn’t perceive him as an out-and-out villain, but as a deeply layered, conflicted man whose complex personality was perfectly reflected in Zimmerman’s grey-hued world. 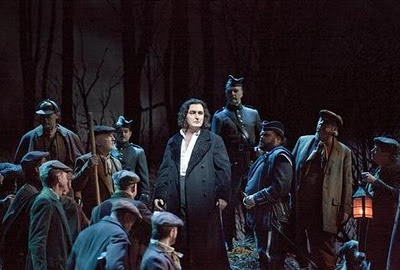 I’m tempted to attend the re-broadcast of Lucia di Lammermoor (April 6th in the US; April 2nd in Canada), to enjoy these fine performances, and perhaps re-think my dislike of Sweete’s work. I totally loved her filmed version of the Timothy Findley play Elizabeth Rex, and I wonder if the distractions -people fumbling with candies, a man talking loudly on his cell phone, my own probably-too-close seat -added to my intense reaction to her avant-garde approach to cinematography. I also want to hear those beautiful opera voices again, and more closely observe the creepy Lucia/Enrico interactions. Mind you, I’ll be sure to take a Gravol before the Scottish tale unfolds. Maybe even two.