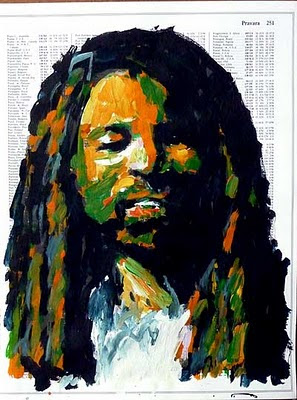 There was something about Rocky Dawuni’s thought about avoiding “preachiness” in Part 1 of this exchange that hit me as both amusing and wise; there are few things more annoying or off-putting than pure polemic in a song. I like a bit of poetry throw in for good measure -that’s just a personal taste thing.

But the busy singer-songwriter hit on something profound, political, and poetic when he wrote a song called “Download This Revolution“. Though he could’ve never anticipated the way social media would be used in Egypt to oust a President, the song shows a clear understanding of the ways technology is influencing people’s lives, particularly within his home country of Ghana. There’s a clever taunt -perhaps a sly commentary -on the state of modern culture and the power of people’s politics, too, as Rocky smoothly croons “upload this / download this… ” -as if sharing information, the miniscule pieces of data that come together across wires and networks and form “likes” and groups and tweets, is this generation’s sit-in, march, loud chant, and noisy protest. People can take to their mobiles or keyboards, and… change the world. At least sometimes.

Like the rest of the songs on Hymns For The Rebel Soul (Aquarius), it’s thought-provoking, groovy, and wise, all at once. The NAACP Image Awards happen tonight, and Rocky’s nominated for Outstanding World Album. We recently traded ideas about the themes in his work, tackling difficult subject matter, and integrating technology within organic musical sounds.

What’s the theme of Hymns For The Rebel Soul?

The theme of this album was to create an inspirational collection of songs that offered a spiritual and melodic snapshot of various cultures around the world. The album reflects on themes ranging from love, life, God and peace beyond war.

What’s your method for integrating soul and real-world issues? “Jerusalem” is a beautiful example of this integration: it tells a story of a conflicted region but is very soulful and poetic at the same time. How difficult was this song to do?

I basically submit to the feel and vision of the song and let it lead me to its final manifestation. This method allows me to combine the real world issues with soul. It’ s basically letting myself be inspired by my own unique observation. “Jerusalem” was written from the first wave of inspiration when I set my foot in the Holy City. There was a certain mysterious beauty about this place that I felt made it the spiritual crossroads for major religious faiths but elusively out of reach for any particular faith to possess. Its divinity lies within its power to provide spiritual refuge to all those willing to overcome their prejudice and submit to its magic…I opened my he art to it and the song came pouring out. It was a very special and effortless moment .

“Download This Revolution” is a fascinating start to the Hymns For The Rebel Soul: it addresses a technological bridge between change, access, and art. Why was it was important to open the album with it?

The song represents our current times so it was an appropriate tone setting song for the album. We are the first generation of the ongoing internet revolution and “Download the Revolution” touches on the issue of equalization of the playing field : the emergence of an age where technology will fuel drastic social changes. The old doors that used to keep mass consciousness from coming into the mainstream will be circumvented while outdated and oppressive political systems fall to the tech-fueled people’s revolution.

I believe there is already evidence of this in the current internet-inspired democratic movements sweeping across Tunisia, Egypt and other parts of the world. The thing about change is that it can be either positive or negative. The song calls for the forces of good to seize the moment and take charge of all the mechanisms of this transformation.

How challenging is it to integrate traditional organic sounds with electronic ones?

Well personally I believe having the options of both approaches gives me flexibility to be creative and push boundaries. Live instrumentation definitely bring s that organic feel to music and it’s my first approach before I mix electronic sounds . Some songs work better when you approach them from the electronic perspective as well.

In the long run it all boils down to the artist and their objective. Organic sounds never get outdated so I personally use that as the basis for my creations.

If you could work with any artist, who would it be, and why?

It will be Lauryn Hill because her songs have such amazing emotional and spiritual depth!

Painted portrait of Rocky Dawuni (top) by John Robertson, from his blog What Art Did He Make Today?