I’ve been thinking a lot lately about art and issues, and where the two -if the two -should intersect. Some say no, others say yes. I’m on the fence about whether the arts can and should, to quote a favorite musical, “take on the world’s greatest problems, from war to pollution / no hope of solution” -but I keep asking, could culture possibly provide one? Not a day goes by that I don’t happily stumble across one organization or another doing good in blending arts and social issues. And yet, I’m left feeling curiously powerless myself most days, wondering why I should have to choose between twin passions and asking if there might be a larger role in bridging the two through 2011. 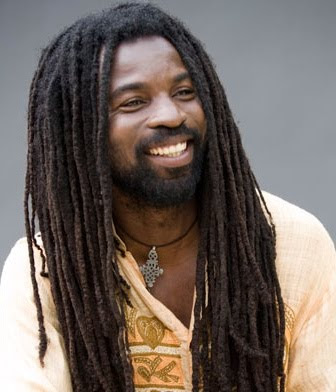 Rocky Dawuni might have a few answers, for me, and for the many others grappling the arts/issues divide -because he doesn’t see a divide at all. The Ghana-born singer-songwriter’s 2010 release Hymns For The Rebel Soul (his fifth album) seamlessly, seemingly-effortlessly blends the two, with reggae-and-dance-tinged music delivering a one-two punch of sage wisdom, righteous rage, and ultimately, tuneful grace. Dawuni especially references the work of Bob Marley (to whom he’s been compared) and Peter Tosh, artists who, like him, blended the world of art with the world of the personal with … the world.

Rocky caught mainstream attention when he recorded a version of Bob Marley’s “No More Trouble” for Playing For Change in 2009 with a raft of talented international musicians, including the Oneness Choir from India, Jason Tamba from Congo, David Broza from Israel, and… oh yes, one Bono Vox from Ireland (aka Bono). The original’s moody, haunting feel gets a global makeover, as artists cross borders mental, spiritual, physical, and even creative to form something altogether more powerful than any collaboration project might suggest. This past summer, Rocky’s bouncy tune “African Reggae Fever” became “African Soccer Fever” and was featured on the FIFA World Cup 2010 soundtrack alongside tracks from Baaba Maal, Florence and the Machine, and Michael Franti. The tune also became the official song for the FIFA World Cup 2010 video game. Put it on as a dare to anyone who says they can’t dance; within 30 seconds, I guarantee you, they’ll be pogoing on the lino, cutting up a rug, and doing the watusi like no one’s business.

Alas, I missed meeting Rocky when he was in Toronto last fall Rocky to be part of the We Day event and concert, organized by Free The Children. But I’ve no doubt he rocked the worlds of the 18,000 students who were present. 2010 was a busy year indeed: months before We Day, he was part of the Vatican-sponsored JOSPfest, and later on, he played the well-regarded Freedom Fest in San Diego. 2011 is shaping up to be busy too; at the end of March he’s off to Kenya for Songambele 2011, put on by NGO March Forth Kenya Kids. He’s on the Board of Advisors for Jammin Java Corporation. In July he’ll be playing the Hollywood Bowl as part of radio station KCRW‘s Global Soul show -with none other than Stevie Wonder.

Now, you’d think a guy this busy wouldn’t have time for social media. You’d be wrong. Throughout the tours, appearances, and recording sessions, Rocky’s maintained an active online presence that positively (and I mean that in a true sense) brims with inspiration and excitement. It’s heartening to see his regular tweets & Facebook updates -not only is he excited about music, he’s excited about meeting people, hearing cool new sounds, exchanging ideas. Rock is excited about life, and it shows. When I interviewed him last summer for a morning radio show in Toronto, he was deep in the throes of football fandom, cheering on his home team as he fielded non-stop calls from friends and relatives. This is a man who deeply understands the meaning of “joie de vivre” and harnesses that optimism for a greater good.

That good was recognized with a prestigious nomination; Rocky’s up for the Outstanding World Album at this year’s NAACP Image Awards, which happen tomorrow night in Los Angeles. The first part of our conversation, below, features his ideas on the responsibilities of the artist, the dangers of preaching in music, and how much he feels like a spokesman for contemporary issues affecting everyday Ghanians. 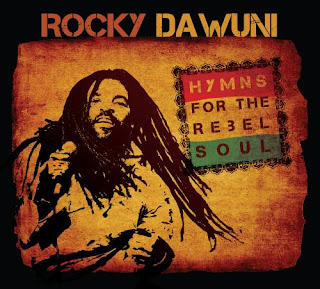 How much do you think musicians should feature social issues in their work?

Well, I think every artist has the right to express whatever they feel their art truly represents. When it comes to social issues, every additional voice can always be useful. The platform that a musician acquires is due to the projection and support of the public so I believe the artist has a moral obligation to wield this with a spirit of humility, gratitude and servitude. It also goes a long way when you give back.The art attains transcendence and realness.

In terms of music and politics, there is definitely a link. Whenever the music ventures to represent the everyday aspirations of people it intersects with everyday politics. In Africa most of us have a bigger responsibility to use the medium to articulate political issues and bring them to the fore of social discussions.

How much do you feel a responsibility to include social issues in your work in particular?

Growing up in Ghana, social issues are a constant part of everyday reality. My music strives to project these issues in a way that will inspire action among my audience.

I think it ‘s the core intent of my musical mission but the important thing is to always maintain a balance so as to avoid blatant preachiness.

How much did the Playing For Change collaboration change your career?

It definitely did, in so many ways. It gave me great exposure and also showed the power of music to cross all boundaries and nationalities.

Do you ever get bothered by outside perceptions about Africa?

On occasions yes I do get bothered. For example, when you meet folks who believe they have it all figured out about Africa solely on the western perspective without any knowledge of the cultural contexts.

Africa’s history is very complicated . The root causes of most current political and social challenges can be traced all the way to its history of slavery, tribalism, colonialism and modern schisms. The objective of my music and my work is to project the new Africa: an Africa whose greatness will be restored by a renewed engagement and reconnection with the diaspora . This new Africa will embrace all the promise of modern technologies and democracy while upholding its cultural identity.

Although the current political climate is rife with turmoil and unprecedented economic issues, I am part of an emerging conscious tech-savy intellectual generation who are rising in its wake. 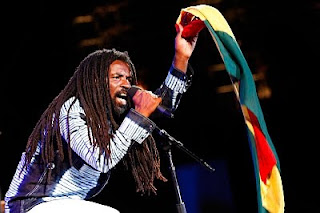 How much do you feel like a spokesman for Ghana?

Well, it comes with the territory. There are so many great things to say about my country in terms of its functioning democracy and freedom of press. Ghana’s long term stability has also projected it as a shining example on the continent.

As a musician on the international stage, I always find myself in many instances playing the role of its spokesperson. It’s a role I always welcome!
__

Part two of my conversation with Rocky Dawuni tomorrow, in anticipation of the NAACP Image Awards. We’ll be focusing on some of the tunes featured on “Hymns for the Rebel Soul” and Rocky’s methods of integrating soulful sounds and real-world issues.