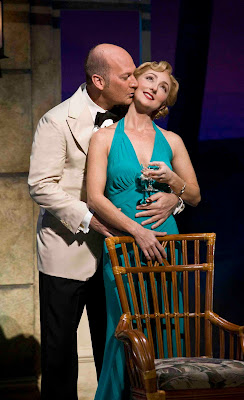 For all its sheen, there’s something awfully disquieting about South Pacific. The beloved Rodgers and Hammerstein musical, about the shenanigans of a group of U.S. army men stationed in the south seas, features some super-famous tunes (including “Wash That Man Right Out Of My Hair”, and “Some Enchanted Evening”), but some genuinely uncomfortable moments that, in the Bartlett Sher-directed version currently back in Toronto after last summer’s run, don’t get smoothed over, but underlined. I love this. Few things are more annoying than a musical production that isn’t conscious of its own dated attitudes or troubling subtexts. Sher doesn’t want cute, shiny, and lovable; he’s more interested in difficult, ugly, and awkward. Those dark places are where the humanity of the piece reside, silent, lurking, and treacherous.

The Tony Award-winning production (running at the Toronto Centre For The Arts through April 10th) features top-notch performances and choreography, but it’s in the show’s design, and particularly, its direction, where one really notices the troubling underbelly lurking within James Michener’s tales. The alarmingly leanings of earnest Lieutenant Joseph Cable (Aaron Ramey) for the young native Liat (Sumie Maeda) gives the gorgeous “Younger Than Springtime” a much darker undertone. Her ambitious mother, Bloody Mary (Jodi Kimura), lurks around the two young lovers after their first initial tryst, singing “Happy Talk” as more of a desperate sales pitch than a romantic lullaby, stalking and wildly gesturing at the stunned Cable and pushing her pie-eyed daughter toward him: “If you don’t have a dream / you got to have a dream! / How you gonna make a dream come true?” But whose dream is it? And how much compromise does it take to make that dream a reality? What’s the price? Sher’s production doesn’t provide any easy answers.

Equally, the dark undercurrent of racism that snakes through Sher’s production gives it an edge against the saccharine moments, that, once they occur, seem at once beautifully poetic and confusingly florid; the powerful ballad “You’ve Got To Be Taught” is delivered as two black airmen stand on one side of the stage, and two white cohorts on the other. It isn’t hard to recall the words of transplanted Frenchman Emile De Becque (David Pittsinger) talking about why he left France -the ostensible reason he gives is “freedom” -but the fact he has no problem having a black servant becomes all the more troubling. Suddenly he and his nurse love-interest Nellie Forbush don’t seem so different after all. Their “Some Enchanted Evening” ballad is indeed, enchanting, but you can’t quite forget that they’re working through the same difficult issues around race, hypocrisy, and Western privilege. 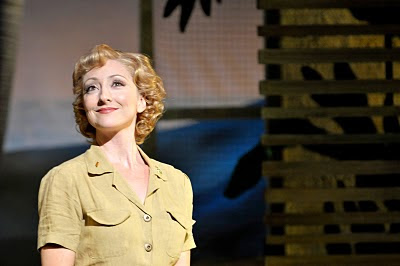 By the musical’s end, love conquers all, though we sense a long road ahead for the couple. Playing a role as complicated -and as fraught with historical baggage -as Nellie isn’t a walk in the park, even with that beautiful, catchy music. American soprano Carmen Cusack captures the frustrations, fears, and outright confusion of a women at an emotional crossroads: trust a man her logical mind says “no” to, or trust her heart, which says just the opposite.

Carmen and I recently exchanged ideas about the challenges of playing Nellie, of singing Rodgers and Hammerstein with opera singers, and what South Pacific might tell a newer generation.

The challenge with Nellie is going through her emotional ride every night without exhausting myself too much. She laughs, sings, dances and cries, she is tormented at various points and to genuinely give that to an audience, my body has to endure her journey. So keeping myself strong and healthy to maintain 8 shows a week is the main goal.

How much did past interpretations of the role affect your own (or did they)? It must be challenging, knowing so many people are walking in with an image of Mitzi Gaynor in their heads.

I can’t say that any particular interpretation of Nellie affected mine. I looked at the script and saw a woman that I could relate to on certain levels and then just watched a bunch of old 1940s films and came up with something that worked for me. Although, I will say that Mary Martin’s spunky, sort of tom-boy feel was inspirational.

Your leading men in this touring show (David Pittsinger and Jason Howard) come from operatic backgrounds. Does that change the way you approach the music, vocally? How much has your own style and approach influenced them?

The music is written so well that there really aren’t any adjustments vocally to be made. The songs come into the scenes and are a perfect flow of the conversation. Rodgers and Hammerstein certainly knew what they were doing. I am lucky to have had several years of opera training behind me so I can blend with my operatic costars. As for my style influencing them…. you’d have to ask them.

One of the hardest things about playing Nellie is the accent -it must be dangerously easy to fall into Hee-Haw rhythms. How conscious are you about this when you’re onstage?

I don’t really think too much about that. As soon as the wig and costume goes on the accent comes. I just try to keep it subtle. 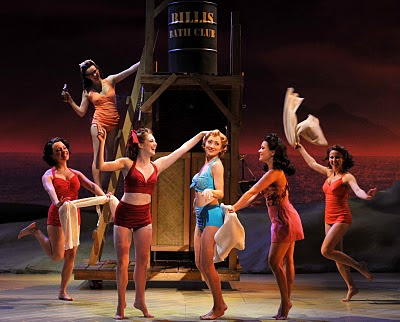 The music from this is so famous and so beloved; how hard is it to stay in character onstage, and not totally swept up by that music?

Not hard at all! It’s the music that helps put me into character and places me on that tropical paradise and keeps me there for those three hours. It’s an awesome ride!

South Pacific has a timeless, and yet timely quality to it. What sorts of things do you think it says to a 21st century audience, one that hasn’t lived through civil rights or World War Two?

How much we’ve learned and yet how much there still is to learn.