There are few things as good as starting the week calm, focused, and full of inspiration. I happened upon the creative video, above, via Facebook, that seeming- springboard for inspiration and revolution lately.
What I love about this is that the visionary is rendered into actual vision; it isn’t spoon-feeding with cutesy drawings so much as rendering ideas into something understandable -and comfortingly familiar (and all done with a trusty sharpie, I suspect). The other thing I love about this video is that it stands for something, not against it. Ireland, facing serious economic problems, is holding an election soon; with all its woes, it’d be easy for candidates to attack others, claiming fault, pointing blame, and engaging in nasty attacks against fellow candidates.
There’s an ad on Canadian television right now, in fact, that doesn’t mention the ruling party (who clearly paid for it) but attacks the leader of the opposition for, in their view, being out of the country for too long to be a credible leader (a charge that has an ironic ring to it right now). It’s this kind of advertising -and the altogether-yucky instincts beneath it (petty, mean, small-minded) -that, I think, turn people off, whatever their political persuasions. And yet it’s so easy to be seduced by the “no” side of the equation. 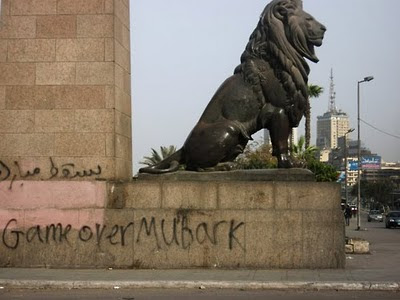 The weekend filled my head with images of contradiction: is it revolution or chaos in Egypt? good change or bad change? It’s been encouraging to hear a number of voices who are coming out with their own vision for the country’s future. “No Mubarek” and “yes democracy” has been a theme, which well and good, but… who then? Who are people looking to? Answers aren’t easy, but I hope they become clearer this week.
Egyptians are writing their future, right now. We are watching them. The scenes being drawn for us -on TV and the internet -are indeed a puzzling collage of violence, thuggery, community and hope. I’m betting on those last two to provide a vision for a solid future -one that extends past Egypt’s borders, to Ireland, to Canada, and beyond. And Dylan Haskins? Great ad. Thank you for the inspiration.
animationattack adsDylan HaskinsEgyptelectionFacebookIrelandleadershipMohammed ElBaradeiMubarekprotests