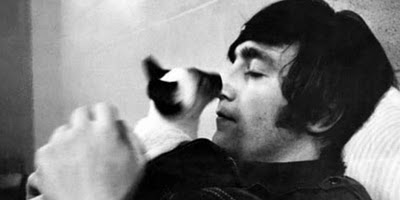 Along with local events, memorials, specials, a loving tribute, and, of course, music, everyone who was alive then remembers where they were, and/or what they were doing. Because the shooting happened in the evening, I only heard about it the next morning. As a child, I grew up thinking of John as an acidic solo artist with a strange wife who was once in a cool band that wrote really catchy tunes. He was the guy with the crooked smile who had strong opinions and an unusual voice. He wasn’t Paul’s cute, smooth operator but rather, an eccentric, subversive bad ass whose influence, I later realized, was much, much bigger than I could ever fully understand.

Even now, I can’t wrap my head around it -this amazing life, this unique voice, this consummate artist, this motherless hell-raiser, this husband, father, icon, Beatle, not-Beatle, this gifted man creating and defining a new universe, happily moving between the world of stardom and the gritty 70s streets of New York City. I want to think of him holding his infant son’s hand walking through Central Park; I want to think of him smiling and chatting with a friend of mine who’d regularly run into him in the neighbourhood; I want to think of him snuggling with Yoko, or playing the piano, or singing, or jamming with his bandmates, or going to see new bands, or drawing, sketching, jotting down words and ideas and speaking out on things he believed in, even if it made him unpopular. I want to humanize him, even while paying deference to his status and acknowledging the long, skinny shadow he casts, even -or especially -now.

John’s passing was different than that of Elvis Presley (whose death I also remember); Elvis was, and will always be, the quintessential rock and roll icon. Trying to humanize him feels, for me, rather difficult, even when I’m told stories by those who knew the Memphis Flash personally. Elvis wasn’t as direct (or angry) when it came to his art, and besides, I didn’t grow up with someone named after him. My best friend growing up was named after a Beatle; it wasn’t John, but easily could’ve been.

I don’t remember his reaction that fateful day thirty years ago. All I remember is pulling on my ever-uncomfortable tights the morning of December 9th and hearing the news, repeated over and over, about how Mark David Chapman called out to his “hero”, about the blood, about the mounds of flowers placed outside the Dakota. And “Imagine” was played over and over, along with so many beloved Beatles hits. I didn’t get it, but I couldn’t get over it. 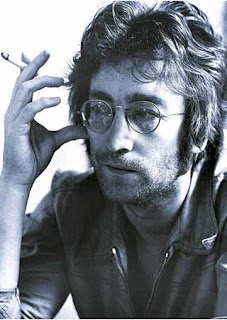 By the time I reached my late teens, I asked for, and received, the CD box set of John Lennon’s solo work. Now, many years later, I still listen to them, on and off, and try not to think about “what if” -because really, that feels like a creative and spiritual dead end. Patti Smith, reflecting on the passing of her longtime friend Robert Mapplethorpe, then later brother, mother, and husband, said she didn’t like to think of death as a “loss”, but rather, as a “gain” -for what the deceased offered the world during their brief time.

And so to John Lennon I say: thank you, times a million. You are here, and you are everywhere, and even if I didn’t know it that cold December day, you were right there with me, and you still are with us, all of us, as we shiver, and cry, and laugh, and sing, and paint, draw, and go about our lives. You’re not here -but you are.

Imagine; I have. And it’s good.