Trying to balance fashion design and ethical sourcing and production can be a right headche for many designers. Cleverly integrating past designs and looks with modern ideas can be just as hard. I thought about these issues as I took a wander through Canadian company Ukamaku‘s loft-style offices recently. Located in an up-and-coming, just-gritty-enough-to-be-hip section of west-end Toronto dominated by renovated factories, Ukamaku has a mission to promote young Canadian designers in new and innovative ways. A big “way” would be online, where you can go and buy all the items featured, read the designer blogs, and see just how much Ukamaku is trying to push the envelope in Canadian fashion with their offerings. 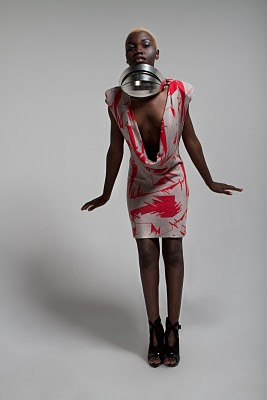 When I visited, it struck me just how many of the designers under the Ukamaku umbrella were interested in two things: one, trying to find that fashionable/ethical balance, and two, fusing the past with the present. This concern was made most obvious in my conversation with Heidi Ackerman. The bespecled young Canadian designer, who sports a huge set of green-black wings tattooed on her upper chest, has a sexy, cosy mix of styles but a consistent high-quality frame of cuts, colours, textures, and shapes. Her patterned cowl-neck dress proudly proclaims on its label that half its materials are bamboo, with the remainder of the dress’s fabrics being ethically-sourced soy. This label, running across the top of the garment, proudly adorns her other work as well. There was a real pride when Ackerman told me that, for the most part, she’s able to balance her design ethos with her ethical concerns, but she quickly added that design always comes first, and always will. Her work is reminiscent of the women’s pieces Sharon Wauchob designed for Edun this past fall, especially the modern, angular knits and Japanese touches. Ackerman captures something elegant, feminine, and experimental, all while balancing wearability and sustainability. Nicely done.

Worth By David C. Wigley also displayed an incredible flair for the fusion between forward-thinking and classic design. Like Ackerman, Wigley expressed a furrowed-brow over trying to balance sourcing and production with quality -and price point. Wigley’s work was among the most modern and stylish men’s design I’ve seen in a while in North America; eschewing the conservative dark palette most men’s designers favour, Wigley opted for an eye-popping furnace-red, sharply-cut suit. Like a lot of the Worth collection, it fuses punk-rock and dandy with more than a touch of hip-hop. This ethos extends into casual wear. My initial reaction to a Wigley-designed gold-studded hoodie jumper was, “I can see Jay-Z in this!” The response, met with a chuckle, was, “Everyone likes this one!” -and I can see why. Wigley is super-good at combining classic qualities -good tailoring, square shoulders, sharp lines -with modern sensibilities -bright colours, unique fabrics, details like studding and dyeing -and doing it in a high-quality way that is both cost-effective and entirely unique. 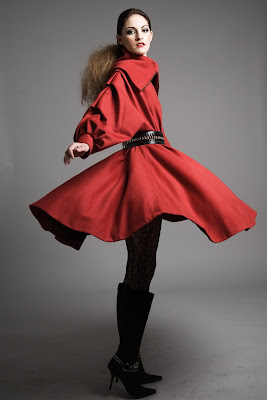 This talent for integration isn’t specific to menswear, either; he also for gals. Wigley’s angular, sexy, fitted crop dress has square, kimono-like sleeves that slit open from underneath, and sphere-like white embroidery that provides a nice contrast to the heavy charcoal color. Like other designers Ukamaku features, Wigley has a few tie-dyed pieces in his collection, notably a drapey hand-dyed silk dress that wouldn’t be out of place at an event like Open Roof Films next summer.

What accounts for the return of the 60s technique? “Designers like the organic quality,” Wigley told me, before adding, “you can’t control it.” It was interesting just how much this sentiment was echoed by other designers, and indeed, Marcus Kan, Ukamaku’s Fashion Director. “Retro theme is a major trend in the fashion world right now,” he said via email. “No one can forget the tie-dye trend back in the 80s. (It) gives off a fun, bright, care-free and funky feeling to the clothes, perfect for a Spring/Summer collection. If people are into technology more, laser print pieces is a great option. The feeling is similar to tie-dye pieces, but the laser prints are more precise and futuristic.”

Precision is one thing, spotaneity quite another. As Wigley noted, you can’t quite control what tie-dye on fabric will do, and that’s part of the joy for him as a designer. The sense of “happy accident” with the dyeing technique mirrors the sort of spontaneous, quasi-accidental artistic accidents that happen at something like Art Battle. Painters and some designers have this much in common: they’re willing to embrace the unknown if it makes the end result more interesting. They’re also willing to embrace the fantastical. While at the Ukamaku head offices, Wigley excitedly showed me another of his popular ladies’ pieces, a snappy fitted red coat that had a distinct Little Red Riding Hood vibe; the “hood” part was clevlerly. stylishly replaced by a massive sprawling grand collar that flattered the wide arms and fitted waist of the very-warm looking piece. It was like Kate Hepburn meets Sioxsie Sioux. Beguiling, sexy, adventurous.

This sense of creative exploration and spirited adventurousness most clearly seen in the work of Breeyn McCarney, whose 1950s-meets-punk-rock looks definitely makes her a stand out in the super-traditional world of fancy women’s wear. A myriad of cultural touchstones and figures, new and old, came to mind in looking at her stuff: Elvis Presley movies, Mad Men, Grease (the movie version), Johnny Suede, 1980s Madonna, 1990s Courtney Love, Tim Burton in Wonderland. A bright yellow party dress, a sheer, corseted, party-like black dress, another sheer lace number with big gold hearts… it was all very new and yet very vintage, all at once. McCarney has a distinct voice that defies easy categorization, which, I realized, is probably the way she wants it. Who wants to be stuffed into a box, in life, fashion, art, or otherwise? 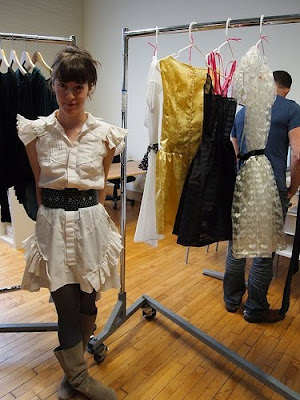 In conversation, McCarney confessed her love of theatre, calling the dresses “costumes” and talking about the various elements of theatre she integrates into her work. Dressed in worn-looking leather boots, black leggings, and a ruffled, short-sleeved chemise with a spectacularly ruffled back, the petite designer gave off a vibe of punk, rockabilly, and pirate. In response to a question about inspiration, she, rather casually, responded with a bon mot I consider to be the good and proper mantra of artists of any discipline, at any given time:”Every day I wake up and wonder, ‘Who am I going to be today?’” (I would add, “Does this still fit me?”) McCarney’s adventurous, cute-sexy designs are clearly aimed for the downtown party-girl crowd who wants to make a statement with the confidence of modernity and the cool elegance of vintage. She’d have to be a theatrical gal for sure to pull off the numbers McCarney designs. I leaned towards a sheer, short, simply-cut polka-dot dress with a contrasting black polka-dot cloth belt; flattering, feminine, flowy… just plain pretty, the piece proves McCarney is a designer of many moods, visions, and talents. She, along with Ackerman and Wigley, will be ones to watch as the Canadian fashion designer scene expands further. It’s encouraging Ukamaku wants to be part of that road.

Later this week I’ll be posting a Q&A with a few of the people behind Ukamaku -why they started it, what it means. I think you’ll find it illuminating in terms of the cultural conversation around the role -and worth -of fashion in the 21st century.