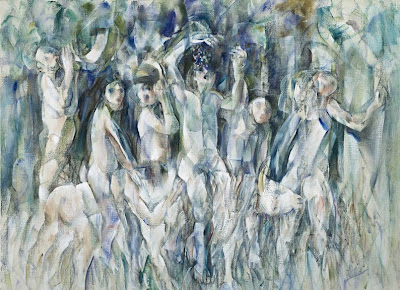 Oh dear, oh dear… several concerts, three openings, two books, a TV appearance, and one surgery (not mine) later, and I find I’m getting guilt-pangs. Dear blog, I’ve ignored you, and I am sorry. There will be a lot more posts in the coming days and weeks, including a review of the last North American stop on Hugh Masekela’s recent tour, an audio interview with the playwright behind a new opera about boxing and women, a preview of an upcoming Robert LePage show involving gender-bending, and my own musing on tattoo artist Kat Von D’s latest book. 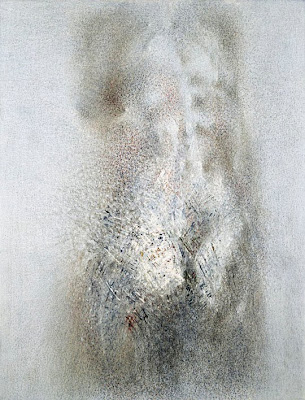 In the meantime, a celebration of sorts is in order. Artist Louis le Brocquy turned 94 today. To say his work was a big reason I picked up a paintbrush sounds too trite, too twee, too completely earnest. But it’s true. I remember being introduced to his work by an art professor many years ago in Dublin; the way I look at art -and the world -hasn’t been the same since. Le Brocquy‘s fierce sensuality combined with his meticulous skill have cast such a powerful spell that I’ve literally lost hours staring silently at his work. And it isn’t just a technical admiration; there’s a real sense of love that pours forth from his works -for the works themselves, the act, the subject, the materials, the very spirit of art and artistry and poetry, the whole chaotic mass of creation, of birth, of death, of living, of knowing, of being …for the sake of it.

It’s not unusual for me to get emotional looking at his work, either; the magical combination of paint and brushstrokes, light and shadow, shape and form, work a kind of alchemical magic that bounces straight from head into heart, threading the two together until there’s no distinction between me, subject, and canvas. This Irish painter’s vision is so singularly unique as to make words very, very limiting in trying to describe its power. That’s the mark of good art in my books. And I try surround and immerse myself in that kind of awesome beauty as much as I can -or at least tote around the compact version, which isn’t always successful.

Only recently have I returned in a big way to my own art-making, and while it’s been a kind of homecoming, it’s also provided an alarming awakening (more on that in a future post). Every carefully-applied brushstroke whispers a primal, messy truth -one I’m coming to recognize and embrace in every aspect of my ever-expanding world. Le Brocquy’s work feels both soothing and a call for authenticity -in art, in love, in life. I hope I can heed it.

For now, I send my heartfelt thanks, joy, and good wishes to Mr. Brocquy. Love and gratitude, always. 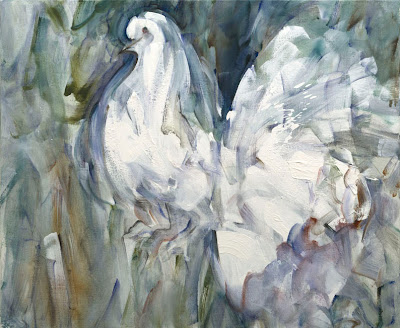