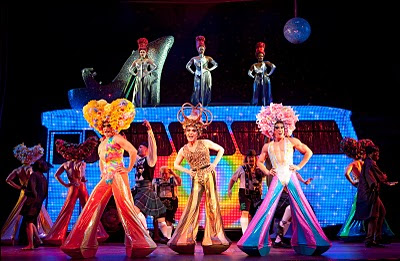 I’m not the biggest fan of movie-to-anything adaptations. It’s unfair, but productions tend to become laden with so many expectations and comparisons so as to sink the show before a note is sung. Lord Of The Rings is a case in point: the 2006-2007 musical suffered in comparison to Peter Jackson‘s epic film series of the early aughties. No matter how silly, small-minded, and un-visionary it may be, people who’ve seen a movie are going to come to its theatrical counterpart expecting to see some kind of approximation. How excellent then, that the musical version of Priscilla: Queen of the Desert does so well in that regard, and, in the process, carves out its own totally-fabulous niche.

Maybe it’s because the splashy work is made up of fun 70s and 80s tunes. Maybe it’s the fact the nature of the work (moving between the exquisiteness of intentional artifice and serious themes) lends itself to the visual. Maybe it’s strong direction, acting, choreography, and design. Or maybe it’s a combination of the all of the above. Seriously, this show’s a winner in all its glittery, glammy glory; it’s fun, fabulous, and stuffed with real feelings. I can’t think of a better way to light up a dark Toronto winter than to scamper down King Street, platform heels and all, to see it in all its disco-ball, swirling-bus glory. It’s really that good.
Priscilla, Queen Of The Desert: The Musical made its North American debut Tuesday night in Toronto. It carries high hopes on its sparkly platform shoes -or make that shoe, which sits aloft the bus (“Priscilla”) which the characters travel in across Australia. The story adheres closely to the 1994 film, The Adventures of Priscilla Queen of the Desert, loud costumes, lewd language, and lots –lots -of buff, sexy men. Mitzi (also known as “Tick”), the hyper Felicia, and the classy transexual Bernadette travel across the country to play a casino in Alice Springs. It’s there Mitzi/Tick reunites with his long-lost wife and the son he’s never met. The musical version has added a few sparkling elements, including three angel-like figures who pop down from the top of the stage and belt out 70s and 80s pop numbers with aplomb, like sparkly muses floating above the performers’ heads. The show’s music is entirely made up of pop-radio favorites, including predictable (if dancey) hits like Madonna’s “Material Girl”, Cyndi Lauper’s “True Colors”, and Gloria Gaynor’s “I Will Survive”. As if to emphasize the glam, there’s a huge sparkly shoe, and disco ball, that go into the audience, along with a few pounds of confetti and plenty of risque costumes (yes, bare-bum-exposing), all of which make the show feel less of a theatre piece than a Pride party in the Princess of Wales Theatre. In staid, conservative-theatre-loving Toronto, that can only be a good thing. 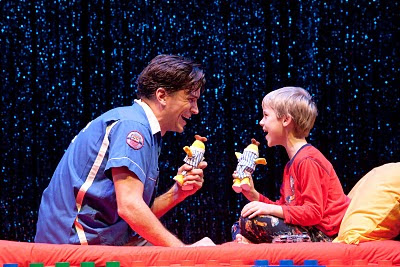 Will Swenson gives a tender, touching performance as a man trying to reconcile various aspects of his past and present with his ever-fluid identities -as father, performer, and gay man; his duet with son Benjamin (Luke Mannikus) was genuinely throat-lump inducing, even with the amusing pseudo-Elvis impersonations. “You Were Always On My Mind” feels both camp and touching at once -and it’s rare the two can co-exist peacefully in any cultural moment, let alone in a musical where camp is considered de rigeur. As the catty Felicia, performer Nick Adams ups the camp ante to 100, ferociously throwing out one-line bon mots and dancing like his life depends on it. He proves himself both a huge comic relief and a deeply magnetic stage presence. 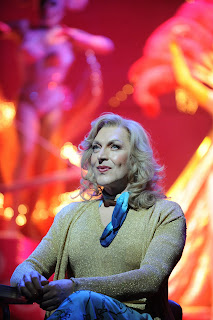 Anger, abs, and tears aside, I found Tony Sheldon’s performance as the elder stateswoman of the troupe most moving; he didn’t have the bitter bite of Terence Stamp‘s filmic counterpart (see? comparisons are inevitable!) but instead conveyed a remarkable combination of dignity, warmth, and longing. Having played Bernadette over one thousand times onstage, and with a lengthy list of theatre credits (including performing in works by Eugene O’Neill, Tennessee Williams and Stephen Sondheim), Sheldon brings a refreshing sense of balance, toning down the campy, outlandish qualities of the show. An older man playing a tranny, toning things down? True. More than anyone, Sheldon clearly conveys the sense of outsider-ness the troupe face in the wider world. Hiding behind big sunglasses, long, blonde hair, and louche outfits a la Lauren Bacall, there’s a remarkable sense of sadness combined with faint vestiges of hope. Sheldon shares a nice chemistry with Canadian actor C. David Johnson (as a kind mechanic), and conveys confident poise, particularly when coming to the defence of Felicia after he’s been beaten up in the tough town of Coober Pedy. Bernadette’s response to a rough cowboy’s rude demand is perfectly executed, and superbly delivered. Ouch.

While it would be easy for the performers to fall back on Thomson’s eye-popping design, but thanks to Phillips’ instinctual direction and the strong chemistry between the three leads, that thankfully doesn’t happen. But it must be said: the set is a magnificent thing to behold, as is that sparkly bus of the title. Designer Thomson borrows liberally from the rock and roll world in his use of LED screens and colour. It was interesting, in watching the show, to see just how much the music-and-theatre worlds collide Priscilla, Queen of the Desert: The Musical. Remnants of past tours involving artists as diverse of Parliament Funkadelic, Madonna, David Bowie, and even U2 were discernible in the set, lighting, and costume design. There is a definite element of rock-pop concert to the proceedings here, adding a party-like atmosphere, and keeping nicely in-step with Mirvish’s other big production, Rock of Ages, which is currently playing down the street.
With gorgeous visuals, jaw-dropping costumes, genuinely joyful performances, energetic choreography, and peppy musical arrangements, one is nudged into the realms of beautiful fantasy here, even as we’re pushed out of that fantasy and shown a much uglier side. The decision to not flinch away from hatred is brave. Showing the nasty lettering that gets spray-painted on the side of Priscilla following a performance the gals give in another small town they travel through allows for a vital bitter edge amidst the sugar. Likewise, keeping the salty language of the film version shows tremendous respect to the source, as well as to the essential nature of the characters being portrayed. Like the movie, the work examines the ugliness of homophobia without dwelling on it. By the end, the definition of ‘family’ -in all its complications and challenges -has been stretched and moulded into something much deeper and wider than any of the characters could’ve imagined at the start. If you’re in Toronto, take your feather boa’d self to the Princess of Wales for some solid, first-rate theatre; if you’re not in Toronto, well… get in that bus. Just remember to bring your dancing shoes.

Middle Photo: Will Swenson and Luke Mannikus in the North American premiere production of Priscilla Queen of the Desert the Musical Photo by Joan Marcus.