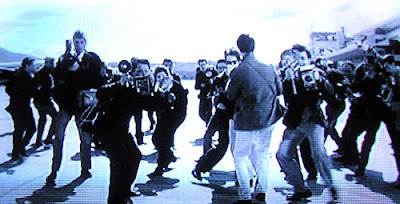 Fame, it’s not your brain, it’s just the flame
That burns your change to keep you insane
–David Bowie

There’s an interesting moment in Teenage Paparazzo, where the precocious teen of the title takes a look at himself onscreen, his eyes wide. It’s arguably the most poignant moment in the film, where the shooter becomes the shoot-ee, and the house of mirrors crumbles away in one awful, shattering thonk.

Fame, and its variable spinoffs, is the theme of this documentary, which made it debut at the 2010 Sundance Film Festival. Teenage Paparazzo tells the story of 13-year-old Austin Visschedyk, and actor-director Adrian Grenier‘s evolving relationship with him. The two met when the precocious youngster snapped the Entourage star one day in Los Angeles more than three years ago; that particular shooting had a psychological effect just as much as an imagistic one, and it launched Grenier’s desire to explore the twisted relationships between celebrities, corporations, and the hoards of paparazzi who can -and do frequently -make or break our public heroes.

Grenier understands this house of mirrors very well; he made his name in a television show that details the life of an actor who’s on a successful TV show. There’s a real irony at work as he films Austin hard at work following leads, trying to finish homework (he’s home-schooled), rushing around the city of Angels on his skateboard or scooter, visiting the camera store, and interacting with the salty old pros who are more than twice his age. Inadvertently, he winds up making Visschedyk a petulant wannabe-star with a reality show in the pipeline, and oodles of toxic attitude leaking all over his fast-fading youth. That’s after the actor becomes a pseudo-shutterbug-come-celeb-stalker himself, though he initially finds the paparazzi who used to trail him are less than open to being exposed themselves. The Hunter getting captured by the game has never seemed so skewed, or weirdly delicious.

Massive Attack – The Hunter Gets Captured by the Game feat. Tracey Thorn by user5776126

With so much going on on so many levels, it’s easy to get carried away, and yet Teenage Paparazzo maintains a fine focus and an above-board perspective that exploits neither its young subject nor the camera-toting ilk he’s part of. Instead, it maintains a smart balance between Grenier’s personal relationship with Austin and his explorations into wider societal ideas around fame and celebrity. Divvying up the film into titled chapters, Grenier takes this hall -make that labyrinth – of mirrors and lay some lines along the ground to make sense of it -at least enough sense to show his young friend that relating is more important than shooting. Likewise, the many interviews Grenier conducts add nice spark to what could be a dreary exercise in self-indulgence; they include candid yacks with stars like LiLo, Matt Damon, and Eva Longoria, along with academics, authors, photographers (yes, some of they do eventually open up), Hello! magazine‘s editorial board, and members of Austin’s family. What’s notable is how the film doesn’t judge any of them, but allows their own voices and actions to speak for themselves, adding subtle influence and subtext to the drama unfolding between pseudo-famous boy and firmly-famous man.

Perhaps most surprising is how the recently-busted Paris Hilton comes off; her impressions and ideas around fame aren’t nearly as vacuous as you might assume. Less helium-voiced ditz and more throaty maven, Hilton conveys a total understanding her celebrity, its demands, its image-upkeep (seriously, does anyone think cocaine possession will harm it?), and its absurd, if utterly enjoyable nature. She neither criticizes nor condemns, but accepts, puts on a smile, and plays up whatever role she’s chosen to play that day, knowing full well the paparazzi will eat it up, editorial boards will make it up, and the public will buy it up. There’s a brilliant scene involving Hilton and Grenier staging a series of appearances together in order to create, from scratch, a feeding frenzy among the paparazzi and itinerant gossip-mongers; it appears the public will buy anything so long as there’s photographic proof.

Thing is, as Grenier smartly points out, that trusted photographic proof can be staged, and, as Alec Baldwin wittily, wisely notes, the same circle of large companies control the outlets around the star anyway: magazines, movies, TV, internet sites all exist within the same massive, chugging machine. Paparazzi may be, true to their name, pests, and they are undoubtedly intrusive, but their connection to the corporate entertainment machines isn’t incidental at all. There’s a huge public thirst around the honey their buzzes give, and, as Visschedyk learns, a huge buzz from being around the honeys. At one point his mother laughs off girls coming to see her son at all hours of the morning, though when Austin is shown with his young catches, he shyly ducks the camera. The last vestige of an awkward youth, or the first inklings of a celebrity?

Adrian Grenier offers no easy answers, neither in the film nor in person. I was in attendance at a special screening of his film last week here in Toronto, and I found that the Byronic-looking Entourage star comes off thoughtful, well-read, and deeply insightful. In interviews, he’s spoken of his deep curiosity around plumbing the depths of the superficial world he occupies. To a few insipid, self-aggrandizing questions from his old-school print journalist interlocutor, he politely smiled, responding with care and consideration. But at one point, when he was thrown a hoary “T. S. Eliot/Wasteland-what-is-the-deep-meaning-here” quote (surely the mark of smarmy pseudo-intellectuals everywhere), Grenier slyly quoted Socrates as a response -and, it should be noted, without a hint of malice (though certainly with a playful spirit; I could’ve sworn I saw a twinkling of the eye). With one foot firmly in the “old” world of books, art, and classic celluloid film (he cited Werner Herzog as a favorite filmmaker and influence), and the other in the high-tech, fast-paced world of pop culture and the internet (he said more features and an adjunct, interactive site to TP is in the works), Grenier is certainly more than a pretty face, and I’ll be very curious to see what he offers in his next film.

For now, he’s firm about keeping his private life… well, private. That includes his friendship with Visschedyk. The wide-eyed boy of Teenage Paparazzo, staring at his precocious, arrogant self grows gracefully into a more thoughtful teen, as we see at the film’s end; it’s interesting to hear him talk about respecting the privacy of the people he used to make money off of, especially in light of his adventure with LiLo last fall. Less interested now in celebrity than in being a confidante, Visschedyk has, at least partly, Grenier to thank -or damn, depending on your viewpoint.

But you probably won’t look at those tabloids at the checkout quite the same again -or the ads in and around them, or indeed, the people buying them. Even if those people happen to be friends, lovers… or you.