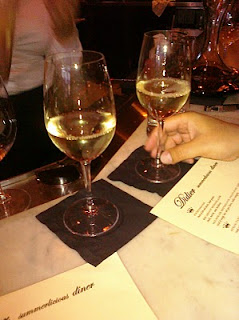 I always enjoy sharing my special dining experiences online -I find the response, both here and in the real world, to be both inspiring and heartening. So I want to share the wonders of a recent visit to Restaurant Didier in Toronto. But a few caveats before we begin.

First, I am not the most dedicated fan of French food; in the past, I’ve found it too heavy, too rich, and just too filling for me. Also, it’s really hard to reproduce at home. There’s something satisfying about being able to whip up basic approximations of yummy past meals in the comfort of my own kitchen, but I’ve never been able to do that with any degree of success when it comes to French cuisine, which places it in the rarefied world of eat-once-a-year-and-don’t-eat-for-a-week-after-ness. Meh. If I like something (or someone), I want it (or him) again and again and again. (And for the record, yes, I equate food and sex; sensuality is central to each, and to the enjoyment and celebration of life. See the Sex On A Plate post.)

Personally, I like food -and restaurant experiences overall -to be approachable, easy-going, pure, and unfussy. While I appreciate the art of molecular gastronomy, I can’t get my head -or tastebuds -around it making for an all-around satisfying meal. French with touches of modern, however, is something I really love, especially if there’s a light touch. Such is the case with Chef Didier Leroy. Dish after dish of amour pur emanate from his kitchen like pearls in a waterfall. and there’s no need to feel intimidated; servers are happy to explain ingredients and method, suggest pairings, and Chef might even come out and chat when all is said and done. Bravo! The restaurant itself is located in midtown Toronto, away from the hub of the scenester-foodie carnival, where basics like service, knowledge, and attention to detail can sometimes get lost amid the buzzwords and well… the buzz. Restaurant Didier is refreshingly un-hipster-esque, but at the same time, is classy, casual, and yes, affordable.

Chef Leroy comes with credentials. He is a member of the Association Des Maitres-Cuisiniers De France and the Academic Culinaire De France. In 2007, he was awarded France’s prestigious Medal of the Chevalier de l’Ordre du Mérite Agricole, one of the country’s highest honours. Dating back to 1883, the Medal recognizes the services of individuals who have promoted French culture through their activities within the sphere of agriculture. Leroy worked in numerous Michelin-starred restaurants and has been a part of such fine establishments as Auberge Gavroche and The Fifth. Impressively, Chef Leroy has been the official Executive Chef for the French Embassy/Consulate General in Toronto since 1990. Not too shabby. 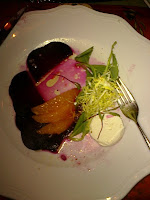 The night I went I enjoyed a prix fixe menu, which, at $50 for three courses, offered tremendous value considering a/ the quality of ingredients (everything is organic); b/ the care and respect with which those ingredients are treated; c/ the incredible degree of knowledge, service, and honesty from the RD staff. They’ll steer you to the very-best wine pairings, any yummy accompaniments, and have an impeccable sense of timing, spacing out courses appropriately, and filling wine glasses at just the right times. And, of course, you’re getting the work of a first-class chef too. Yum.

For my first course, I chose Salade de Betterace, Orange, Fromage De Chevre, a delicately-flavoured beet salad with tiny medallions of snowy goat cheese and orange segments, and topped with Ontario greens. The beets were sliced paper-thin and were tender but not floppy, the fork prongs easily impaling their moist, sweet flesh. The goat cheese was, thankfully, not fridge-cold, but just the right temperature for swirling along the beets & greens, or spreading onto the beautifully crusty baguette side with the succulent, juicy citrus fruit. I could’ve downed another plate of this luscious, jewel-like salad, really, but I was happy the first course -along with the others -were proportioned accordingly, with absolutely no weird food architecture. 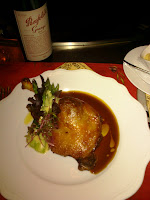 My second course was Duck Confit. It did, in fact, come with a gorgeously-charred sweet potato-half tucked beneath the meat, but there was nothing sky-high about the presentation, or indeed, off-putting about it at all. Quite the opposite! Duck confit is one of those dishes I have once a year (if that), owing to its extreme caloric content. In truth, it was closer to two years since I’d had the dish, but …. goodness me, Chef’s handling erased any negative past experiences entirely. It was, quite simply, the best duck confit I’ve ever had. Moist, if amazingly un-greasy morsels of tender meat, in a beautiful, rich-but-thin sauce that encircled the plate (with a just-so tender side of greens), each bite providing a pure, real connection to the bird and to the skill that so lovingly prepared it this way. Needless to say, I am now re-considering my once-a-year-only confit stance. Any increase might entail jogging home, however -or at least skipping dessert, which, on this night, was totally, wonderfully impossible. 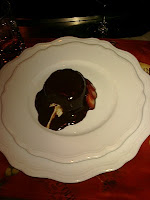 Dessert was Trilogie De Chocolat Valrhona -or a chocolate trilogy, which consisted of layers of moist, ebullient bittersweet darkness. Runny, solid, soft -all the textures and flavours of this special, luscious treat were nestled together in one gorgeously posh, small portion. The level of detail was truly impresssive, with a lovely, subtle presentation and again, a just-right portion. The dessert -with a full-mouth flavour of rich cocoa, but without any cloying sugary qualities -paired beautifully with the 2005 Penfolds Grange wine my companion and I were enjoying the evening of our visit, and (as before, but in reverse) I would’ve gladly downed a few plate-fulls, were it not for the salade and confit that came before.

All in all, my visit to Restaurant Didier was a wondrously delicious experience. I happened to notice on the menus that the kitchen also caters to vegans and vegetarians, and offers a Chef’s Tasting Menu for tables. Truly, something for everyone, but with a smart, stringent respect for the French culinary tradition -along with the quality of ingredients -that, in this world of over-saturated hype and wannabe-stars -is truly inspiring. I am now a confirmed French food fan, thanks to the masterful work of Chef Didier. Yes, I want to return soon. And I will.