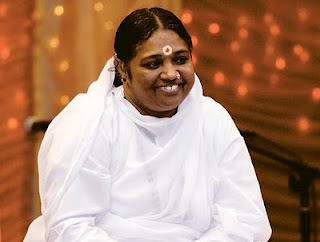 One week on from getting a hug and I’m still not sure what to make of it.

Amma, the famous Indian humanitarian and world-renowned hug-er, was holding court at a hotel ballroom last Monday. I have been following Amma’s work now for over a decade; her philanthropic activities, together with the mass affection with which she is greeted at every public opportunity, created a certain awe, as well as an intense curiosity. Impressive spiritual being or over-hyped New Age sort?

Prior to my hug, I recalled the amazing number of reports detailing her work from her home base in Kerala, India. I also remembered the reports of those who had come into contact with her -their sense of feeling strange, peaceful, and generally good after receiving one of her famous hugs. Amma has hugged hundreds of thousands of people; she showed no sign of letting up as she greeted the hundreds assembled to greet (and hug) her last week.

After being brief on the basics of receiving darshan and some simple instructions -”Take your shoes off / She doesn’t speak English / Follow me” -I was lead into a large ballroom full of people dressed in draping white, standing, sitting, swaying, and smiling. Old, young, brown, white, walking, disabled, scarred, spotless, men, women -differences and divisions ceased to matter. I suppose it was a perfect symbol of the universal appeal of Amma. Loud Indian music shot through the speakers, along with a video of Amma singing at a live concert. The whole thing had the feel of a Sunday morning at a gospel church, but with a hushed revery; it was celebratory and quietly joyous. There was little if any poe-faxed seriousness, and many of the people were happily sitting in silence, on chairs or on the floor. Some were meditating, palms up, others were just gently smiling, staring at nothing in particular, high on their own special kind of bliss. 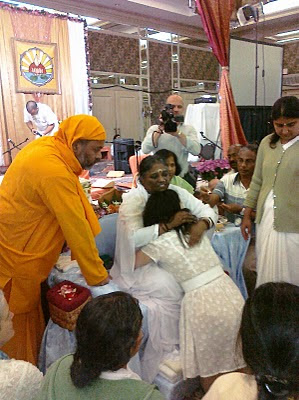 Having been lead into a line near the front, I was told by an assistant to kneel on the floor and move forwards accordingly. Amma, smiling and occasionally chatting with one of her swamis, (who I later learned is a former Bollywood director), hugged couples, babies, families, and individuals, placing an apple, a rose petal, and a Hershey’s kiss into every person’s palm as they left.

When it was my turn, I was struck by how physically small this big-hearted woman is. Seated on a small platform, my supplicant position was perfect for a literal, real meeting of hearts. Any initial awkwardness immediately melted away as I wrapped my arms around her waist and leaned my head on her chest. She said something in my ear a few times (“Madoola”), audibly but soothingly, as a swami uttered words I can only assume were part of the darshan. Amma held me a lot longer than I anticipated she might -there was such a long line of people waiting to see her -but I never felt rushed or anxious. Only comforted and totally accepted.

When we finally let go, we looked into each others’ eyes and beamed. I was handed a huge red apple, along with a rose petal and my silver-foiled kiss. She gently closed my palm over the gifts and nodded at me. I got up. Tears suddenly came to my eyes, and I had no idea why. Perhaps it was the occasion, the music, the outpouring of adoration by so many who’d come and waited so long, maybe having waited so long myself … to finally have that moment! Maybe it was the honest, open acceptance of Amma herself that moved me so deeply. Who knows? It was a inexplicable moment.

I held my apple for a long time, gently, letting it roll around my hand, letting Amma’s beautiful fragrance of rose petals and incense envelope me. I’ll always remember her embrace. I don’t know why, and I don’t know why I should feel so moved by this woman -but, to paraphrase Shakespeare, there are more things in the heavens than are dreamt of in philosophies, in reason, or in a world where everything requires explanations, reasoning, evidence, and rational thought. Sometimes the most meaningful experiences transcend language. 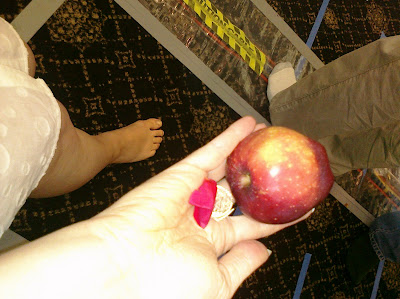