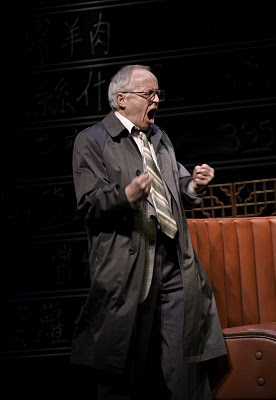 In prepping for my live radio interview with actor Jordan Pettle last week (he plays tough nut office manager John Williamson), I returned to my review of last year’s production. Shock and awe aside (“I wrote that?! No, really… I wrote that???”), I was struck by how much had changed, and how much had stayed the same in this year’s version. The chemistry between the six cast members is as pungently male as ever, its energy as snappy and smart as the salty dialogue. Director David Storch has the performers -Eric Peterson, Albert Schultz, Kevin Bundy, William Webster, Peter Donaldson, and Pettle -play, literally and figuratively, with their own energies, reactions, and relationships with one another. Most noticeable in this year’s revival is the sheer physicality on display; chests and chins jut forwards like prize fighters daring their smarmy mugs for a loud, proud shiner. Spit flies around with as much aplomb as big promises and dead contracts.

There’s a kind of manic, angry magic at work here; between Ken MacDonald’s sexy, shiny design and _’s slithering sound design, a kinetic energy comes sparking from the stage, full-throttle. It’s exhilerating, exhausting, and ultimately enlightening. Jon Stewart and his gaggle of writers are equally foul, fierce, and funny about financial ruin -in a way, they’re Mamet Circa 2010, with every ounce of anger, wit, and that alchemical transformation that happens in the arena of performance; a kind of magical inversion of “reality” happens, with equal gasps and guffaws bouncing off sets, sofas and stages. There’s something so powerful about the mix of funny and angry -it makes the underlying rage all the more bitter, and strangely, cathartic.

Storch nicely captures this magical combination. You’ll leave wanting to either jog a twenty-mile marathon, or take a long, hot shower. Maybe both. Whatever you do, channel that energy into something positive that doesn’t involve selling bad stocks or properties in Florida.