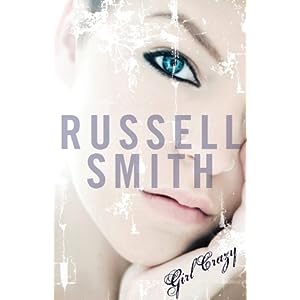 “Since when did the personal become the small?“

So ends a recent column by writer Russell Smith in last week’s Globe and Mail. I pondered this line as I reviewed various favourite blogs, artworks, musicians and artists. “Personal” is a complicated matter, especially within the creative realm. Doing it well entails walking a fine, hair-thin line between insight and narcissism. Regarding the personal as “small” depends on who you’re asking, what you’re creating, and how you’re synthesizing elements of life, imagination, and observation.

I’ve always been a fan of the venerable Mr. Smith, for the way he manages to seamlessly integrate all three, while pouring in mounds of thought-provocation about the wet-dry trails of footprints that map out our contemporary lives. Last week I attended the launch of his latest book, Girl Crazy, which revolves around an established urban man’s obsession with a stripper and the seedy underbelly he is inevitably drawn to. I haven’t read it yet, but based on Smith’s past writing, as well as a recent (positive) review, it seems like a heady mix of questions around social class, the nature of modern life, the drag of adult responsibility, and the hot steaming throb of obsession ballsing the lot up. What’s more, it feels, like much of Smith’s past work, entirely shot through with a smart sensibility that embraces both male and female perceptions around the deliciously taboo two-backed beast that both scintillates and scorns our society, vampirically sucking at the humming root of desire that sits inside us all. 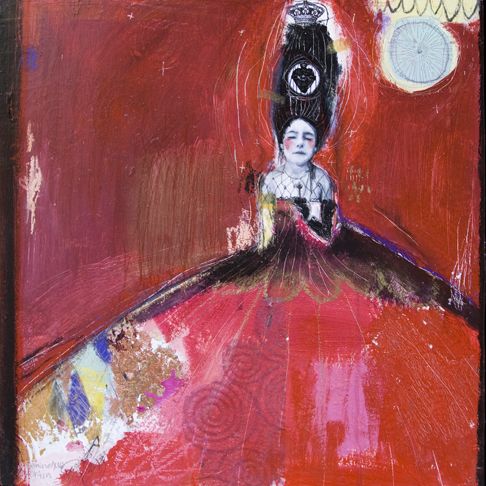 Just before attending Smith’s book launch, I went to an art opening featuring the work of Quebecois artist Dominique Fortin. Like the author, the personal is anything but small in her world; with references to family, friends, and her own history (and future), Fortin beautifully fuses the twin themes of epic and intimate to render the most personal moments understandable, real, and present. Ironically, the title of the exhibition is “Petits Geants” (or “Small Giants”. Fortin embraces and celebrates femininity in an epic yet intimate way that I found deeply moving as well as inspiring. Using faces and figures as her main motif, Fortin integrates the visual play of Klimt (notably with the creative use of spirals and intricate patterns, for which she employs a range of mixed media) and the graffiti ethos of Basquiat (especially in her use of text around and/or above her figures). The effect is something of a punk-rock Alice In Wonderland, with china doll-esque black and white female faces sitting atop large (sometimes winged) figures, lost (or maybe found) in a swirling, soft focus world of imprecise measurements and imperfect geometry. 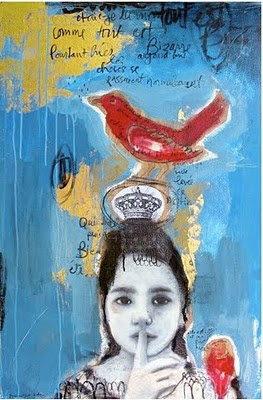 One of the paintings features Fortin’s daughters as facial models, which is brave, considering the artist confessed her determination in depicting an all-around female archetype in her work. I’m not a mother, but I related to the dark-angel whimsy of her work and found myself mesmerized by the raw, aggressive scrawls and strong painterly colours, especially in the context of their contrast with the delicate-faced figures. Featuring one’s offspring as the model of that universal, and deeply powerful idea, is both brave and crazy -but overall, the show (running at the gorgeous Thompson Landry Gallery through May 9th) is totally beguiling. Fortin embraces both child-like wonder and adult desire with equal gusto, and the results pour beautifully forth on her mixed media canvases.

I have a feeling I may find the same powerful mix in Smith’s words as I do in Fortin’s artwork. The “personal” as small? Only if you’re small-minded to begin with. Done well, and there’s nothing more universal -which is, at least to little ole me, makes for the most memorable art.

Girl Crazy is published by Harper Collins and is available now.

“Petits Geants” runs at the Thompson Landry Gallery to May 9th.