Fearless: Legendary photojournalist and cameraperson Margaret Moth has passed away at the age of 59. Moth was known for being gutsy and for leading her fellow crew into places other journalists feared to tread. As she explains in the video on the link page, she didn’t have a death wish, but rather, fiercely loved her life and her chosen profession. No kidding. Her jaw got blown off when she was covering the Bosnian War in 1992 and she had to have extensive facial and oral reconstruction. But off she went, back to work -work that took her to the West Bank, and into more dangerous situations. Moth’s dedication and passion are truly inspirational to me, and I’d imagine, to many others.

Paint It Orange: Artists in Detroit are painting derelict houses. Why? Well… why not? As well as bringing attention to the jaw-dropping economic disparity in Detroit, the work brings a kind of joie de vivre and creative, improvisatory to areas that badly need that kind of play. The spirit of openness is infectious too; as the artists explain, the projects lead to opportunities and area regrowth. Yes, artists can make a difference. Thanks to Good Magazine and Halogen TV for a truly good story.

Speaking of which: Bono attended the Pan African Media Conference last week in Nairobi. Yes, I know there’s a lot of strong opinions out there about his involvement in world issues and his passionate activism, but as a user named ewangu commented on this (Kenyan) post, “At least he is trying, he has the influence and resources…. someone has to!!!” I’ve always seen his efforts less as patronizing and meddling, and more humanistic and matched to the old white-flag-waver of yore (minus the mullet). Would North Americans (much less CNN) have paid attention to the Pan African Media Conference without his presence? Debate amongst yourselves.

Ring Ring: Teddy Ruge of Project Diaspora was in Austin, Texas last week, taking part in the Africa 3.0 conference at South by Southwest. In the video clip below, he says that “aid agencies do great job perpetuating the model of ‘Africa needs aid'”, echoing an argument made last year by Dambisa Moyo.

Ruge, who is critical of the One Laptop Per Child program, notes that “those of us in Diaspora are starting to wake up to the fact that we have the power to make a difference in Africa -by starting social entrepreneurship programs. Hopefully we can create a wave of change that can have Africans taking responsibility for Africa as opposed to looking to the West constantly for assistance. It’s time we started providing solutions for ourselves.” One of those solutions is via mobile technology, something software developer (and Appfrica CEO) Jonathan Gosier compellingly explores. As he writes, “Africa doesn’t default to the mobile device because they want to, they do it because it’s useful for them.”

Mali Cool: A exhibit by Malian photographer Malick Sidibe is on now through March 26th at the Bekris Gallery in San Francisco. Titled “Other Africa”, Sidibe’s shots capture a time in 1960s/70s Western Africa that, frankly, is dead cool-looking -full of gorgeous people dancing and having fun. It’s so far from the stereotypical image of Africa that North Americans are fed -which is important -but his work also shows an incredible eye for shape, form and detail. You can tell why his studio became a popular hangout for the beautiful people in the 70s too. I hope this show tours. I want to see these prints in-person.

Not useful but fun: Here’s an entertaining list of ten inspiring mash-ups/remixes/ re-envisionings compiled in the New York Times’ Arts Beat blog. I was particularly moved by the 3D version of Guernica set to the music of Manuel de Falla by artist Lena Gieseke; going behind, through, an around Picasso‘s figures is a surreal, if very immediate way to experience his work in a brave new way. I love the Obama/McCain Dance Off too (I wonder if the Health Care Vote hostilities could be resolved this way…). The Sinatra/B.I.G. mash-up beat-filled ode to New York is also affecting, not just for its balls-out bravado and macho swagger, but for the sad reminder that both its artists -so symbolic of the Big Apple in their own times -aren’t with us anymore. 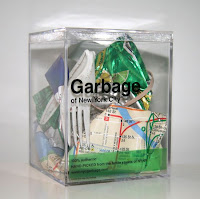 Art+Trash Squared: Artist Justin Gignac takes on New York City in a whole different way. He takes inspiration from trash -literally. The enterprising artist sticks city garbage in a sealed plastic cube and then sells it (for $50 each, in case you want one). Recycling? Smarmy post-pop culture commentary? Opportunism? All of the above? As Web Urbanist notes, “It’s a little bit Andy Warhol, a little bit street-corner-junk-hawker and a whole lot of kitsch, but it’s clearly a hit – over 1,200 NYC Garbage cubes have been sold to buyers in 25 countries.” Everyone wants a bite of the Big Apple -no matter how much it might hurt the teeth.

My Anansi moment: I’m one of the many people part of the current round of the Review Crew, the online review site for publishing powerhouse House of Anansi. Yay! The chosen book is award-winning author Pascale Quiviger‘s hauntingly gorgeous The Breakwater House; it’s been months since I finished reading this slim book, and I’m still thinking about it. You know it’s good when…

Coming up this week: pieces on the Toronto Jewish Film Festival, Hot Docs, and current theatre in Toronto, including Art, Oh What A Lovely War, and who knew grannie: a dub aria. I’ll also be posting about the delicious, inspiring links between Stratford, Ontario and the recent (and inspiring) food event, Terroir 4, that happened earlier this month. Oh, and tomorrow is World Water Day; to mark the occasion, I’m hoping to speak with Maude Barlow about a documentary she’s part of that airs this week on TVO. Whew! Hang loose, stay tuned, hang on, stay strong.