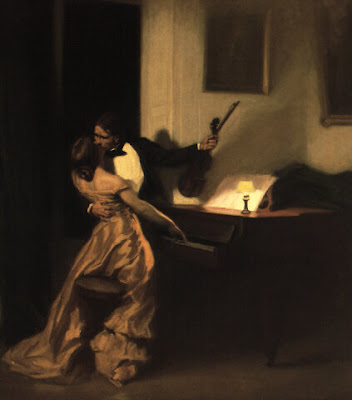 Poor Sandra Bullock. Poor Kate Winslet. Famous, adored, lauded, beautiful. Divorcing. Lord only knows what the machinations are within any relationship to make it go kaput, but among the many assumptions being made, I think the only one worth betting on is the tough road both the respective parties have traveled. Bullock canceled an appearance in London out of “unforeseen personal circumstances” –which to me, means, ‘I don’t want to see anyone right now.” Fair enough.

But what happens when love gone wrong goes public? Celebrated Russian writer Leo Tolstoy imagined such an ugly scenario when he sat down to write The Kreutzer Sonata, based on Beethoven’s fiery music. The story revolves around a man sharing his tale of love, jealousy, suspected infidelity, and finally murder. Upon its publication in 1889 it was perceived as perverted, disgusting and scandalous; authorities promptly banned it. A year later, Tolstoy wrote a kind of apology for it, though it did nothing to dim the bright salacious bulb of the original, its glaring light shining capturing the money-spot of sexy pain and orgasmic violence.

Toronto’s Art of Time Ensemble decided to stage Tolstoy’s work, adding, as befits their collectively experimental soul, elements of dance, theatre, and of course, music to the works. The Kreutzer Sonata was performed last year in Toronto to great acclaim, and is currently receiving a revivial, on now through March 21st (Sunday) at the Enwave Theatre at Harbourfront Centre. I had the chance to chat with one of its performers, actor/director Ted Dykstra, who had so impressed (and scared) me doing a brilliant rendition of Allan Ginsberg’s Howl at a previous Art of Time Ensemble event. Dykstra, ever the insinghtful artist, had some fascinating things to say about Tolstoy, marital jealousy, and the idea of a “world-class” city.

What’s different about this year’s performance?

Last year I read my own adaptation, but this year I’m stupid enough to try to do it without reading it.

You can’t do it complete justice just reading it –you have to live it. In order to live it, you have to memorize it. I memorized the whole thing –well, I adapted the novella and memorized the adaptation –so it’s about fifteen minutes long. I think (Tolstoy)’s crazy (laughs)… in a genius way! Geniuses are allowed to be crazy! It’s very dark humour.

How much humour comes through?

It comes the day I’m doing it –and it can go a lot of different ways. I like to let it do me rather than me do it. What’s great is that, first of all, live music. Andrew (Burashko, AOT’s Artistic Director) is actually playing, underscoring bit of narration. I have the advantage of these live people underscoring (what I’m doing). In the second half of it, the same music is used to celebrate nothing but beauty. It’s a celebratory thing about love.

How timeless/timely is The Kreutzer Sonata?

Anyone who’s ever experienced marital breakup or jealousy in any form will see themselves in it, either as the aggressor or the victim, and that’s a pretty large section of the human population. Also, we really think so little of what’s behind a crime, and this lets you into the mind of a person so you can understand his madness. I have to be sympathetic to the character I’m playing; this is a guy who murdered his wife, and that’s an interesting thing to watch. As far as timely goes, it’s not anymore or any less timely, it’s just universal.

Talk about the synergy between disciplines in the Art of Time: music, theatre, dance.

It’s there between Andrew and I for sure. Neither of us is content to just be one thing. We both like to cross boundaries and disciplines. I’d like to do it even more and so would he. I think the city is starting to be ready for it. I do get frustrated with Toronto sometimes. The very fact one has to say “world-class” is embarrassing! Nobody in any great city, ever, has to say they are “world-class” –and that’s what makes it world-class. Andrew would be a celebrity in Manhattan. He’d be at BAM, doing the cool stuff. He’d be sold out, sought after, written about. He’s one of those artists. Here, except for a small group of our population, he’s literally unknown. I’m tired of telling my friends in theatre who he is –I mean, I’m happy to do it really, but it is frustrating to have such great work going on so below the radar. There is a slow sea change, though, so it’s exciting.

The Kreutzer Sonata runs at the Enwave Centre at Harbourfront Centre March 18th through 21st.