There are many memories around St. Patrick’s Day for me.

I recall parties thrown by Irish friends, where the adults drank whiskey and us kids got milk with mint syrup. I remember more debauched celebrations in university that involved continual tar-and-malt-coloured libations through the day (and into night). In 2003, I met my mother at an Irish pub. She made the black remark that, “we’d better get good and drunk; there’s going to be a pile of dead people tomorrow.” The second Iraq war was on the cusp of starting; that sore festering pimple left the pallor of St. Pat’s particularly scarred, especially since pub patrons were taking sips between quick, nervous glances at the telly, as if CNN was the band-aid one could put on the bruised complexion of the world. Of course, my mother was right: three days later, we awakened to news of bombs, rockets, blood and screaming. And plenty of speeches and chest-thumping. Drinking didn’t make it that much better but the communal experience of being in a pub helped immeasurably.

St. Pat’s also has a personal dimension for me: today marks the day that, in 2007, I moved from a bittersweet, happy/sad life in Stratford, Ontario. I toasted my new circumstances that night, with dirty hands and sore arms, in a newly-painted room with a gleaming hardwood floor. The future was a huge question mark yawning forth with fangs and tongue flicking. Everything was new and old at the same time. “Woe to me,” I thought between bouts of self-pity, “if I wound up nothing but the undigested afterthought of a Beelzebub offering sin and redemption one foul swoop.” I still can’t figure out if I’m cud or steak, but one thing’s clear: that painful St. Pat’s made me stronger.

Before the fortifying challenges of adulthood however, I remember another St. Patrick’s Day. I was living in Dublin (yes, Ireland). I was in my early twenties, and my definitions of love, worth, security, friendship, play -hell, even art -had been turned upside down in the six months I’d been there. After weeks of gloom and wet, the dampness so keen it stained the walls of our ancient flat and made wearing three layers de rigeur, St. Pat’s was bright, sunny, and mild. Joyful crowds lined O’Connell Street: apple-cheeked grannies, sozzled students, North African immigrants, people from the numerous outlying suburbs, all enjoying a day off. Everyone was smiling, even the Gardai, in their uniforms, with buttons eye-searingly shiny casting rings of light along the cracked cement. 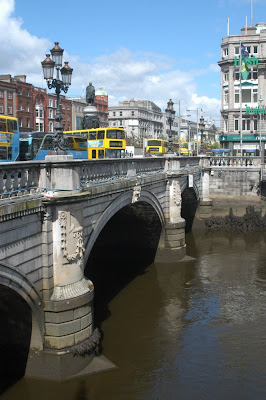 I’d stood on the thick concrete rail of the O’Connell Street Bridge weeks before, a friend holding a leg each, imploring me to “hurry up!” as I happily, manically snapped pictures of the buildings and houses cupping the Liffey like a cooing grey dove. Cold winds had whipped me to and fro, as hands gripped my ankles, then pant legs, and then the inevitable comment of “you’re insaaane!” floated through the rain-soaked air, chiming in harmony with the metallic ca-chunks of the camera lens. I’d gone to Dublin because, as a first-time move-out, I thought it would be easier to negotiate than the busy, buzzy shock of Gotham-like London; I was also in love with words, and had been intellectually, emotionally, and spiritually sustained by the likes of Yeats, Heaney, Joyce, Beckett, Behan and O’Casey for years. It’s no accident I wound up living mere blocks from the Dublin Writers Museum, the Gate Theatre -and the GPO.

As I stood that day in Dublin slowly inhaling the joy, the sunshine, and riotous celebration, there flashed a pang of sadness in my chest -that familiar, oh-so-Irish sense of doom, drama, and joy, melded together. I was already making plans to move to London. I didn’t know what the future held. I wasn’t even sure why I was leaving. And then I saw it: a float, featuring players from the popular television series Father Ted. I’d come to adore the show before I’d moved, thanks to PBS airings, and living in Dublin cemented my adoration. It was a ringing success in Ireland for simple reasons: the gentle mocking of the Church, the ironic winks to tradition, the celebration of community and friendship. Pauline McLynn, who played Mrs. Doyle, and Ardal O’Hanlon, who played Father Dougal, were on the float, and were greeted with manic waves and cheers. But their appearance was tinged with sadness: their co-star Dermot Morgan (who played the title role) had died very suddenly the previous year.

I came out of a darkened pub to blinding sunshine later that day, feeling overwhelmingly sad yet happily content, all at once.

“Moving?!” an Irish co-worker and friend had exclaimed, “you’re moving? Why??”

Bittersweet. Good and bad. Yin and yang. Stout and whiskey. That’s Ireland. That was my life there. And Dublin gave me the greatest St. Patrick’s day ever.