Olympics? What Olympics?! If I had to award a gold medal, it would go straight to Black Dub.

The super-band is lead by incredible Canadian musician and music producer Daniel Lanois and features the super-charged pipes of Trixie Whitley, daughter of the legendary Chris Whitley. A few lucky souls have already seen them live this year, but Black Dub treated fans and curious music-lovers February 17th by streaming a live broadcast from New York City’s Bowery Ballroom. Together with the multi-talented Brian Blade on drums and bassist Chris Thomas, the concert was filmed by Here Is What Is collaborator Adam Vollick. During the hour-long set, the band covered a good bit of their own material along with some Lanois favorites, and proved why their upcoming release is one of the most anticipated of the year.

Images displayed in the run-up to the show were a surreal, ambient mix that reminded me of the work of artists as wide afield as the Emergency Broadcast Network and Bill Viola to Mark Rothko, and even Antonioni. The zipper of comments that ran along the side of the live feed was filled with impatience, excitement, and even a few hilarious observations from people in the Bowery’s capacity audience (ie: “I can’t see who’s in the VIP section. Granny’s eyesight is bad here.”) Watching the mix of images and reactions, there was, I felt, an truly intimate quality to this kind of live event; with just a cozy room to play in and a friendly crowd sharing thoughts and reactions in real time to Vollick’s every close-up and wide pan, it was the kind of communal, creatively connected experience that nicely reflected the band’s ethos. 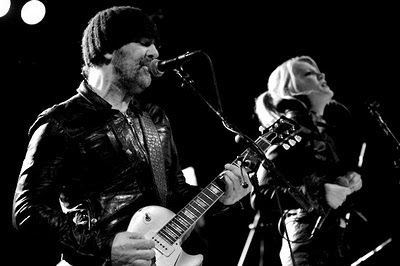 As for sound, trying to categorize Black Dub’s music is no easy task. It’s a mix of grinding rock, blues, early punk, and dark rockabilly, with an occasionally eerie, swampy, Waits-like slink and touches of Sunday-morning gospel. Watching them live from the Bowery, this defiance of definition was obvious, loud, and proud. Whether steaming through blues-influenced numbers like “Silverado“, the gospel-meets-blues hip-swaying meditation of “Nomad Knows“, or the earthy, 21st century psychedelia of “Ring The Alarm“, one was continually reminded (whether via rimshots, timbres, key changes, well-placed pauses, or a combination therein) of the magical chemistry at work between these accomplished individuals. Chemistry is a huge key to what makes Black Dub so special, particularly in this era of superstar narcissism, where every American Idol seeks to be a famous icon instead of a real musician. Black Dub turn their collective back on all that, focusing instead on a gorgeous exchange of ideas manifest in sound. In many ways, their work harkens back to jazz, with its focus on group dynamic, interplay, improvisation, and experimentation. The online audience lapped it up, perhaps hungry for a real musical experience that showcased real people playing real instruments. 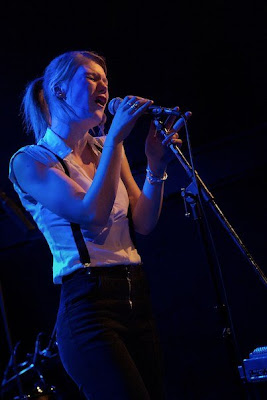 One of the finest instruments on display was Trixie Whitley’s powerful, soul-searing voice. Moving comfortably from mellow to blasting to soft and pleading, Whitley proved herself a formidable front-woman. In addition to showing her incredible vocal chops, she also showed her musical versatility, bashing along with Blade on her own drumkit, playing a keyboard, strumming a guitar, or providing vocal back-up at points. With her black suspenders, white t-shirt and fitted black trousers, with blonde hair neatly tied back in a pony tail, she cut a stylish, strong figure reminiscent of rock feminist icons like Patti Smith or Debbie Harry in her early Blondie days. Lanois, in knit cap and low-slung jeans, played a few of his own hits, including a grinding, guitar-heavy version of “The Maker” with a shuffle-beat percussive undertow courtesy of Blade, and Lanois’ own effects-laden guitar work lending a virtuosic, woozy counterpoint to Whitely’s acidly sharp backing vocals.

Overall, the evening was a showcase of musical talent that conjured a kind of beauty rarely experienced in live show -whether in-person or viewed online. The balance of instrumental and vocal pieces, of thoughtful and straight rock-out numbers, of give and take between musicians, demonstrated both an awareness of their audience and a courage of creative convictions. Black Dub aren’t out to make sing-a-long favorites, but they are out to create a musical experience for both themselves and their listeners. I got the distinct feeling in watching them that no two concerts are ever quite alike. They’re so aware of their collective talent as a whole but never become arrogant within their individual egos. That doesn’t mean they don’t rock out, however. What a gorgeous showcase of adult rock and roll: real, lived-in, world-weary, and honest, or, as one viewer typed on the live feed, “fuzzy, smoky, and sensual -that’s what I came here for.” It could be the definition for rock in this century, and Black Dub are already ahead of the curve. 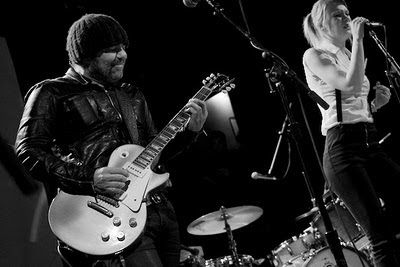