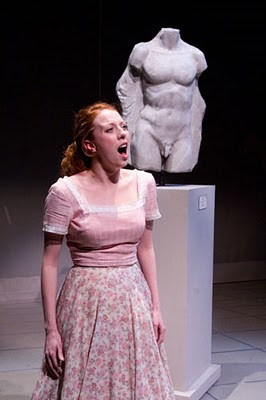 Romantic, insightful, deeply felt, and lovingly performed -what else can I say about the Toronto production of Light In The Piazza? Oh yeah: it inspired me to cook a slat of rigatoni al forno the following day. Bene? You bet.

Light In The Piazza started out life as a novella by Elizabeth Spencer. It became a weepie 1962 film starring Olivia de Havilland, Yvette Mimieux, George Hamilton and Rossano Brazzi. The musical version premiered in 2005 at the Vivian Beaumont Theatre in Lincoln Center, where it ran for over a year and received a boatload of awards: two Outer Critics Awards, five Drama Desks, and six Tonys. Not too shabby.

However, I approached the musical with some caution, mindful of the fact that I have a marked distaste for the maudlin. I figured, a story involving disability, love, and parental (dis)approval can’t end well, nor can it provide insight into matters of the heart -or culture. Turns out my fears were utterly unfounded. Toronto’s Acting Up Stage Company has done a wonderful job of rendering Adam Guettel’s work (book by Craig Lucas) with simple, quiet elegance, while keeping the necessary passion firmly in place.

The two main characters are the Clara (Jacquelyn French), a 26-year-old with the mental capacity of a child, and her hyper-protective mother, Margaret Johnson (Patty Jamieson), who are American tourists abroad. They’re not the tackily-dressed, loudly-garbed, photo-snapping types, either. Director Robert McQueen has kept the original time period in place, with classy vintage costuming reflecting a more retrained time. Margaret and her daughter’s upper class outfits (designed by Alex Amini) -dresses, hats, scarves, all in muted, soft colour -nicely contrast with the Italian natives’ vivid, stylish costuming, but, importantly, neither the garb nor the overall direction ever reduces anyone to a stereotype. 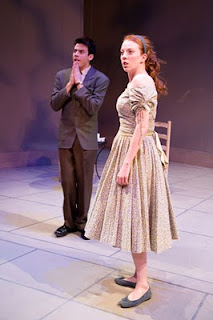 Seeing the production avoid easy stereotyping was a relief, because despite Corriere Canadese being one of the show’s sponsors, I still feared a tacky Luigi (the moustachioed chef from The Simpsons) caricature. But I needn’t have worried; McQueen draws out some wonderful performances, using Guettel’s intrinsically knowing score as a guide. Several scenes and numbers delivered or sung entirely in Italian, with the pitch and intensity of each mirrored in movement and delivery. Florence -presented less Frances Mayes-esque and more E.M. Forster-ish (at least contextually) -is where the mother-daughter pair meet Fabrizio (Jeff Lillico), who is immediately drawn to Clara. Lillico, so memorable in productions at both Soulpepper and Stratford, is wonderful as the smitten young man who barely understands his own passions and yet knowingly understands (and accepts) Clara. Stage veteran Juan Choiran is wonderfully charming as his father, Signor Naccarelli. The scenes between he and the beguiling Jamieson, whether awkwardly exchanging pleasantries or sharing a short, tender kiss, are very poignant, revealing the piece’s subtext about missed opportunities and new ones. French and Lillico also share a lovely chemistry that is at once passionate and gentle; their silent exchanged glances and carefully-considered silences reveal two actors who deeply understand the awkward, wild wonder of young love. 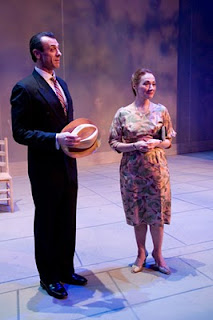 Equally as impressive is Guettel’s score, masterfully lead by Jonathan Monro. While one might expect loud, treacly declamations of love-you-forever-ness, we instead get insightful psychological sketches. The music takes elements of other modern musical contemporaries (notably Sondheim) to weave a sonorous, elegant tapestry of sounds that is beautifully rendered by the quintet, who are kept in the half-light behind a white scrim that is set in labyrinthine slats across the wide stage of the Berkeley Street Theatre. This elegant, economical design (by set and lighting designer Phillip Silver) is a perfect canvas on which to paint the story of mothers and daughters, fathers and sons, men and women, parents and children. The Light In The Piazza is about so much more than the obvious “love overcomes all” superficiality its premise might imply; it’s about love, to be sure, but it’s also about opening yourself to possibility, even (especially) when it’s risky. I heard a line in a rap tune recently, that “you maximize potential when you take risks” and though this is the furthest thing you could get from rap, the message -and magic -remain the same. Step into the light, the piazza whispers, come into the light. You might be surprised what you see -and who sees you.

The Light In The Piazza runs through February 21st at the Berkeley Street Theatre.
Photographs by Joanna McDermott.