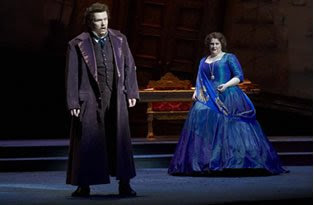 Last week I had the distinct and awesome privilege of seeing Simon Boccanegra onstage at the beautiful Four Seasons Centre. The last few years, I’ve developed a wholly new appreciation for an artform that I wasn’t entirely sure I liked, even though it was thoroughly entrenched in my upbringing from childhood. Hmm, maybe it’s a sign of maturity, or the fact I cover arts and culture for a living, or the fact that I’ve worked in theatre, and know how much time, effort, and skill goes into a production. And maybe it also has to do with the fact that I simply adore the work of the COC. Classy, musical, and deeply thought-full -just some of the ways I’d describe past performances (make that experiences) -and Verdi’s Simon is no exception.

In a nutshell, the story can be reduced to a very simple equation: politics = family, and family is always political. Duh. Seems like that’s the case with much of Italian opera. I’m still on the fence about it all, really; the entirely-gorgeous, crazily-romantic music has a way of drawing me in its spell, even if librettos are frequently ridiculous and maudlin. I mean, come on, throwing babies into fires? Magical love potions? Bitchy Ital-oriental women? That’s not the composers’ fault -obviously -and I realize grand opera, like romantic fiction, was the escapism of its day (and it’s not like Wagner ever attempted realism -or social commentary -either). I tend, like many I suppose, to sit back and enjoy the marriage of music and mise-en-scene, and let the rest go.

But Rigoletto, easily one of the most famous operas ever written (as well as being my own mother’s personal favourite) has always, always grated on me. Yes, the music is breathtaking. But the story… leaves me cold. The idea of Gilda, the title character’s naive, shuttered daughter, being so naive, weak, and idiotic, and so willingly controlled by men… ugh. I know, sign of its time, victim-mindset, etcetcetc. Whenever it comes to shut-in daughters -and indeed, whenever I see or hear Rigoletto on radio or television -I always think of Shylock’s Jessica, who, like Gilda, escapes her father’s stern rules to go out and play.

But unlike Gilda, Jessica knowingly defies her father -for love, but also, we suspect, out of revenge. Shakespeare has it right: young women, especially those who feel their their freedom has been denied (or has, in fact, had it denied) by family or authority figures, are going to go out and find it themselves, in the most rebellious, dangerous, and irresponsible of fashions. So it makes sense that Gilda would take off with her nocturnal madrigal; the fact she’d be actually surprised -and then protest -at her kidnapping, however, is hilarious. The fact she’d be all good-girl over it, and protest his advances -when she probably had the hots for him all along -is beyond the pale. And then later telling daddy all about being … uh, raped? N-O.

Maybe it’s my modern sensibility. But even as a kid, never, for a second, did I ever buy it. The fact she’s pining for the miscreant Duke later on, while perhaps characteristic of a woman who’s been abused by her partner, remains, to my mind, woeful -and sexist. The Duke was never her partner -he was just that guy in the street she sadly trusted. The fact remains that neither she, nor her seemingly-heroic-meets-inept father see the truth of the sickly-karmic world they’ve created; Cordelia she is not. And why does that Duke wind up getting the best tunes, if he’s such a dickhead? 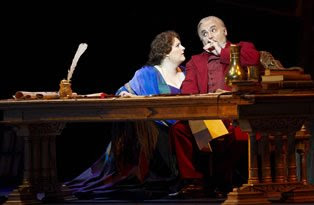 Simon Boccanegra presents another kind of daughter: one who, though committed to her father, nonetheless stands up for her own choices. Okay, so she says she’d die for her man before she’d let her father harm him -*cue eyeroll* -but the fact she’s essentially telling him, “Look, I love this person, and I really don’t care what you think, or whether you like him or not” -is brave, and it was refreshing to see. The fact that, unlike Rigoletto, the daughter in Simon doesn’t actually know her father until she’s an adult does, of course, make a difference in their interaction -it changes the mindset of the character -but unlike Gilda, Amelia never comes off as a victim, despite having been denied knowing her father, and only meeting him later in life.

That sort of reunion holds personal resonance for me. The scene between Amelia and Simon, as they stare at one another for the first time, comprehending everything, was, in the COC production I saw, handled beautifully, with just the right amount of delicacy and drama. Unsure whether to hug, stare, or be with their own thoughts, the pair just gaze in wonder and awe. I know what that feels like. Sometimes opera isn’t so fantastical after all -sometimes, it’s just life, with a beautiful soundtrack.

Reason #1 I need to go to New York