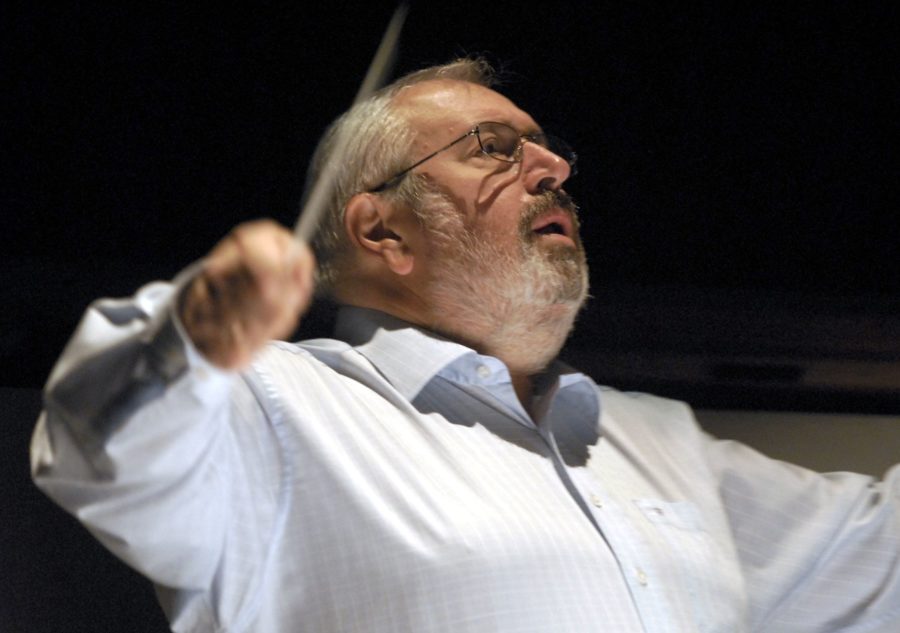 I learned of conductor Michail Jurowski’s passing yesterday morning, March 19th, 2022. What a blessing, to have met him and later spent time in conversation. Initially meeting at a concert (where else), we subsequently arranged to speak, with him in Berlin, and me in Bucharest. Kind, patient, generous, and full of stories, he was very involved in sharing his thoughts and experiences, and offered extraordinary insight extrapolating on how things like compromise and authenticity affect the work of being a conductor and artist, pondering responses, breaking out big grins now and again, asking me to repeat things (“the sound on my computer is so bad!”). I confess to feeling like a fraud at a few points, battling through the anxiety I could feel rising in waves now and again: who was I, after all, this yokel Canadian asking these questions, even daring to approach him, music-degree-free me?

How long have I been incubating this, after all, this perceived lack which is burnished into shame: I don’t fit in because I can’t! It is a shrieking demon. Some days I wonder how much I should keep listening. In learning of Jurowski’s passing I was reminded of a moment when that demon was, if not silenced, content to sit in a corner, only making the occasional ruckus. Some days are better than others in facing down such a creature. Sometimes it shrieks, tells me I ought best quit writing about music, that I cannot possibly have any value: I am unworthy! Everyone is laughing at me! What a fraud! No one in the industry takes me seriously or values my work! Why am I doing this? No one cares because I’m an idiot!  Imposter syndrome for writers is real; equally real is the rejection one feels from lacking what all the other members of the club seem to so easily possess, and the benefits they enjoy as a result (community, acceptance, applause, access, encouragement). I am learning to negotiate such details, to see a much broader picture; there are things happening in the world. I am slowly learning to kick the demon’s tail out of the way as best I can, with a reminder (in my mother’s voice) that I’ve always been an outsider anyway; why should now be any different? Maestro didn’t care about my perceived deficiencies, or if he did, he didn’t let on. Get the lead out, as my mother would say. Ah, but broody rumination pops its soggy head up just as the demon’s bright tail disappears.

The last thirty hours or so has been spent, in large part, ruminating on that 2019 conversation with the conductor, between looking at a litany of news items, one more horrible than the next. That he should pass now, of all times, seems especially tragic. Moscow-born and with Ukrainian-Jewish roots, Jurowski belonging to a certain generation that looked to the West as a source of hope and even inspiration. He didn’t buy the reductive Them vs. Us narrative made so popular (so widely if unconsciously carried) promulgated through Putin-era politics. His focus was European and Slavic repertoire (his father’s included), but he was well aware of administration stesses and funding realities and what they all meant, having held official positions in various organizations (Leipzig, Berlin, Dresden). He was highly aware of postwar perceptions of Russian-ness versus its lived reality, aware of what it was to be an outsider. He knew about audiences; as he told me in our chat, the one in Cleveland was among the most receptive he’d experienced. He didn’t carry heavily  sentimentalized notions of his home country, or if he did, he didn’t let on publicly. (Through such a lens the final image of Tarkovsky’s Nostalghia begins to make an awful sense, but more on that in a future post.) “My family has been through a lot,” he said, speaking about his father toward the end of our chat. I remember he shook his head, letting out a little sigh.

Whatever memories he did carry were firmly in the past, and not meant to be guides of the present, creatively or otherwise. It is painful to think he only enjoyed his American debut in 2019, at the age of 73, a few months before we spoke. Jurowski cared about a great many things, but what he didn’t care about where I happened to be from, what that might imply, or what that could mean in European classical music circles. (The recent cries from the continent, along the lines of, “Mon Dieu, don’t import your North American culture wars here!” seem especially absurd, but again, more on that in a future post.) Maestro didn’t seem to care about my perceived lack, as someone born in North America: of the “right” background; of the “right” degrees; of the “right” books / movies / theatre / albums having been consumed in childhood / youth; of the “right” linguistic skills; of the “right” cultural knowledge. All of these things seem to hold a certain weight to some in the current cultural milieu, ironically, in an era that is (the marketing tells us) meant to be more inclusive. He was curious, and in today’s climate, a symbol of what Russian culture can, should be, and maybe still is: curious, yes, but also open, inclusive, generous. He asked me again in that conversation, just as he’d done when we met: how did I know his work? (Moses, by way of soprano Chen Reiss, who appears on the recording); how did I know about Kancheli? (Youtube makes sometimes-magical suggestions); he was flattered at my enthusiasm, my admitting to exploring things I didn’t grow up with, what I want to call my Canadian moxie. He was happy to exchange ideas, happy to listen to what I heard in those albums and others, keen to know the paths I’d taken thereafter. He offered suggestions and encouragement, and I remember leaving that conversation smiling.

It wasn’t because there was some kind of bridge that had been magically built over the course of our 70-minute exchange, more a sense of open reception, faith, good energy. Music is not, to my mind, a universal language, nor does it build bridges; there are too many varied perceptions, too many differing lives, too much inequality, too many varied streams of thought, too much intransigence, too much sadness, and none of that is magically erased with romantic artsy lenses (nor should it be in some instances) – but the thing music asks us to do, in its best form, matters: to use your imagination, and sometimes, do that in the exercise of empathy, to make the leap across a chasm, sans bridge. Some (composers, conductors, singers, ensembles) are more skilled at highlighting this act than others. As listeners, we are often asked to imagine – other people, other worlds, the composer composing, the musicians playing, the maestro on the podium, the faces and hands of engineers and producers and audiences – and yes, of course, one imagines one’s self sometimes too, as one or another (that’s the navel-gazing instinct social media encourages, after all), but the music I love best is the sort that gently requests a look outside, away from self, to another world, another time, another life, without attempting to understand. Some things don’t make sense, because they can’t. This has been something I think the last two years has constantly reminded us of; loss doesn’t ask to be understood. We cannot understand, we cannot control. We can only mitigate effect, minimize transmission, think, consider, act – stare at the chasm, wonder if we have the right boots. Sometimes the right sounds, at the right time, blow the fuse on the ouroboros of suffering. It isn’t the music doing that, it’s what what we’re bringing to it. Perhaps we’ll light some tiny spark, somewhere. Perhaps the chasm will fill in, however slightly and temporarily.

Alas, we also have the choice not to move at all. A quietly-yawning compassion deficit, prevalent throughout modern life and made noticeable amidst pandemic, is now writ horribly, painfully large through war. I’ve been writing about this lately and how it relates to the classical industry (including as part of an essay series; Part 1 is already up), contemplating its implications and origins a great deal – reading, watching, trying to understand various worlds, minds, lives, and ways of thinking and being, all of them largely powered on this horrendous deficit of compassion (Andrey Kurkov, Hannah Arendt, and Ingeborg Bachmann provide a few clues, along with the films of Yuri Bykov and Andrey Zvyagintsev). I have been avoiding and simultaneously diving straight into news, furiously hoovering, barely eating, avoiding mirrors, slowly completing student marking, booking a trip, cancelling a trip, pecking at writing (and tossing around giving it up altogether), eyeballing graduate school, smirking at cat photos, and looking out the window at the pond across the street. The signs of life are there, though the colors are still muted; the geese have yet to return, but the robins are already out, bobbing along the edges of low bushes. I want to flick the parked cars away like dirty crumbs. Perhaps a little bit of faith is required (hard and expensive it may be); perhaps a bit of patience. Loss is so difficult to understand, so huge to navigate. It is such a large hole, with such rough edges. There is no such thing as the “right” kind of grieving; there is only grief, and it takes as long as it must. In the meantime, one remembers, and keeps remembering.

And so I remember Michail Jurowski – his kindness, his generosity, his curiosity, and the ways in which his work touched so many. Seeing the various tributes of late, I am struck at their shared chords, the ones sounding out those qualities which are so precious, the ones which have become so scarce. He was Russian, Ukrainian, Jewish, a musician, a husband, a father, a grandfather, a friend, a confidant, an inspiration, a mentor, an artist; he only made it to America once, but oh, lucky Cleveland. He affected so many, so much, and I hope his spirit lives on not only through his family but through those who worked with him, spoke with him, and those who listen to his work with renewed curiosity and enthusiasm. His mind, and his spirit, knew the notes as if burned into the heart; as he told me in 2019, he “composes” them in a sense, himself, every time he opens a score. He never used such knowledge as a weapon, but instead, as an umbrella. I imagine myself standing under its shade now, hearing the sounds of Kancheli, Rubinstein, Shostakovich, Tchaikovsky, and those of his father too, and I imagine things blooming, slowly, however briefly, waiting out the storm.

Thank you, maestro. I wish we could have spoken one more time.