Maybe it’s the Weiner news, or the Bender effect, or the recent full moon…. whatever the case, I’ve been thinking a lot about sex lately, and the ways in which men and women view it, approach it, ask for it, and enjoy it.

Following Anthony Weiner’s surreal press conference (muppet-head included) last week, during which he announced continuing his bid for NYC mayor following further revelations about his lewd online activity, I came upon a fascinating essay published after the fallout from the David Petreaus scandal early this year. Half-ribald, half-deadpan, writer John Richardson has written a burner of an op-ed in which he takes on marriage, martyrdom, sex, worship, and male-female relating, all within intriguing historic-social contexts (with generous dollops of mythology and gender politics on the side). Even if some bits make you want to throw your head back and laugh (or forwards, to throw up), the piece inspires further thought about the ways society perceives cheaters -particularly how we, collectively, mete out punishment and judgment.

It was surprising to note, during last week’s presser, the extent to which my twitter stream filled up with vitriol and sarcasm toward the disgraced politician. Those reactions intensified when his wife, Huma Abedin, spoke after him; the advice-giving, the know-it-all-ness, the psychologizing, the pity, supposed takeaway, the sheer mean-spiritedness that followed in subsequent days offered a stunning if unflattering portrait of a society – us – desperate to label a woman in difficult circumstances. Another depressing aspect was, and remains, the lingering image of a couple feeling pressured to maintain the everything-is-fine! status quo of marriage normaldom. It’s as if they were on a stage, acting parts in a play they seriously didn’t believe in but desperately wanted audience approval for. Looking back on the day, I was reminded of a compelling New York Times article about the royal baby, labeling his presentation a piece of great “salesmanship.“

Being a couple in the public eye can’t be easy. You’re not allowed to be normal and have problems and challenges like everyone else. You’re held up as a role model, facing an enormous amount of pressure to consistently portray an image of The Happy Perfect Family in the public realm. (I googled “the perfect couple” and came up with roughly 293,000,000 results.) That role-playing is depressing, dishonest, and mostly, stupid, because every relationship has bumps, every marriage has rough patches. There is no such thing as perfection, but there’s this sick need for public figures (whether they be politicians, actors, singers, or broadcasters) to provide a sort of smooth, perfect fantasy image for the rest of us to (supposedly) aspire to. Such an aspiration is pedaled by various advertisers (and fellow celebrities) who stand to gain from the promotion and promulgation of that fantasy: men, you are like this in a relationship, women, you are like this in a relationship. Conduct yourselves accordingly (no matter how difficult things may get). Smile. Hug and kiss. Publicly talk about how much you love your husband/wife/kids. Repeat. It’s what is expected, ad infinitum, and, ad nauseum.

Flavoring the fevered pitch of mockery to the Weiner sexting news was Slate’s “automatic” name generator, posted shortly after the presser. A parody of Weiner’s alleged Formspring handle “Carlos Danger“(which makes me smile; it points so clearly to need to be perceived as stereotypically masculine and heroic, doesn’t it?), the site allows you to put your own name in, and *poof* out comes your very own wild-and-sexy-crazy name. Mine? “Edourdo Risk” -a male name. In fact, they’re all male names. A commenter on the page responded to another commenter’s complaint about the lack of gender parity thusly:

Until female politicians start humiliating themselves and their families by getting into sex scandals on a regular basis, I’m afraid you’ll have to just do without the female name generator.

Awww, just do without, ladies!

But that’s hardly the point, the supposed lack of indiscretion by women in politics (though it is a possible future blog post). The point is that Anthony Weiner is a politician with a funny/unfortunate name who decided to use another name that reaked of machismo (and is possibly connected to Chuck Norris, a living, breathing example of machismo if ever there was one); is it not possible to consider women being afforded the same luxury, of hiding (even in fun) behind a name that both milks and mocks their gender roles and the expectations around them? Males and females having salacious online connections re-name and re-adjust images accordingly, just as the porn industry re-names its performers to conform to gender stereotypes; men conform to a mold of hyper-masculinity (or, in James Deen’s case, riffing on the dreamy, doe-eyed, good guy image), women are, by and large, jammed into (pardon the pun) the mold of soft, compliant, passive-if-eager (but not too aggressive) fembots, keen to be “taught,” to please, to pleasure. The whole point is to create and sustain a fantasy.

And it’s precisely fantasy that is being created and cultivated when people (married, unmarried, dating, cheating, curious) hide behind an online alias. Does Slate really think that fantasy doesn’t apply equally to women as it does to men? It doesn’t matter -it’s just a bit of fun, right? But that’s precisely why it matters. Doing something for fun doubles – triples -the importance of leveling the playing field when it comes to sex, roles, and ideas; both guards and expectations are down. People are smiling, even laughing. That’s where change happens. That’s where attitudes shift.

Would it have taken so much longer to create a code that is inclusive? I want to believe we aren’t so narrow in our definitions of cheaters, cheatees, horndogs and lustmuffins that we’d limit who is allowed to make themselves appear flamingly ridiculous in public -even or especially for fantasy. Women aren’t that holy and pristine, are we? That’s a tiresome (and burdensome) female cliche that fits a certain New Age image: nurturing mothers, peacemakers, wisdom machines, goddesses. To buy into any of them is to buy into the image of the Perfect Couple too. I’d say women deserve every chance men do -good chance, bad chance, loud chance, quiet chance -to make themselves look like total horndogs, bullies, idiots, cheaters, asses, and pigs just as their male counterparts have done. Women deserve that opportunity. I, for one, would take it.

So please Slate, don’t call me Edourdo; call me Carlotta… or this. 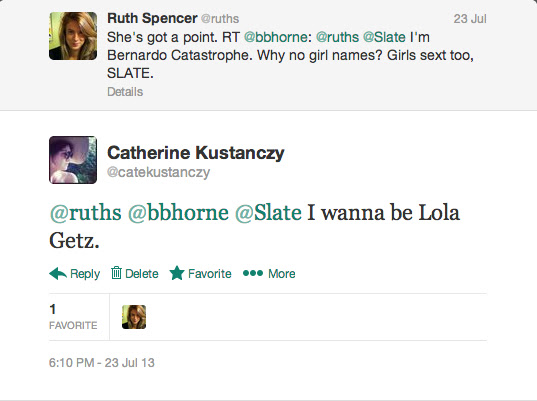 Writing Inside (And Outside)