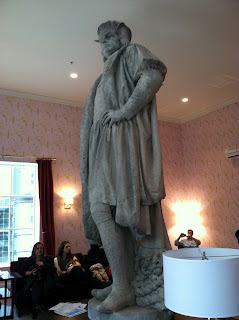 “Everyone should see this.”

That was my first thought upon leaving Discovering Columbus, the new art project from Public Art Fund in New York. There’s so much going on in Tatzu Nishi’s incredible installation -from climbing the six stories, to the views, to the wallpaper and TV in the “living room” -that it’s hard to take in on one visit alone. Beautiful, deep, shallow, troubling, whimsical… it’s a lot of things at once, just like its (immense) subject matter, America itself.

Nishi comes at Russo’s statue of Christopher Columbus, and its busy locale, with an outsider’s perspective; I was especially taken with the books lining the shelves in the installation. The works of Woody Allen, Ernest Hemingway, Walt Whitman, Malcolm Gladwell, Jeffrey Toobin and Steve Jobs and many more were like little glints of inspiration, offering exquisite, lacey detail to the fantastically-fitting dress that is Discovering Columbus. The statue itself is scary up-close -scary, and perhaps a bit bitchy; the exaggerated pose, hand on hip, imperious stare, and judging expression wouldn’t be out of place anywhere in Manhattan.

I’m in the midst of putting a feature together on it – but seriously, GO AND SEE IT.