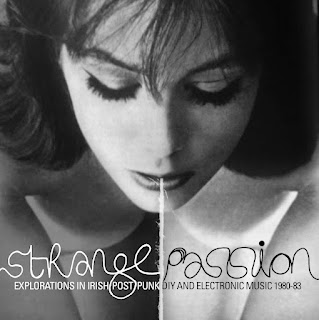 As has been noted, part of my mission this summer is to educate myself about music a little more – new music, old music, everything in-between. Being an arts journalist has afforded me a ton of opportunities to go exploring, even if time constraints mean I frequently feel a bit of a musical dilettante, skipping from one artist/band/era/genre to the next. But one thing caught my attention, and it’s stayed glued there for months now. It even resulted in my writing a formal feature.

July 16th saw the release of Strange Passion, a compilation of sounds from the Irish post punk era. The first tune I heard from it (back in June) was SM Corporation’s “Fire From Above”, which has since become my unofficial summer anthem. With its bouncy beat and bleepy-bloopy electronic sound, along with a vaguely keening-esque vocal line, it’s really the best sort of earworm to have through the heat waves and hot storms dominating the last couple weeks. In deciding to do a feature length story on Strange Passion and post punk in Ireland, I knew I’d be falling, delightedly head-first, into a cultural landscape I find deeply fascinating, even now.
The Dublin of the late 1970s and early ’80s was anything but glamorous, but, based on research and interviews (and frankly, the music), it was an inspiring time for artists. As Gavin Friday told me, sometimes the best art can come from the smaller, less glamorous cities; I turned this over in my mind after he said it, considering the home cities of some of my favorite artists (Prince is from Minneapolis; R.E.M., from Athens, Georgia; even The Beatles are from Liverpool, which was hardly a hotbed of hip cultural life in the late 1950s). There’s something to be said for geography being destiny for artists: why, how, if (or when) they leave, they always carry a piece of their locale with them in song and sketch and spirit.
Bands like Major Thinkers, Chant Chant Chant, and The Threat may not have lasted in any literal sense, but I’d like to think that listening to them affords me a peek into a creatively compelling place and time, one that’s bled over into our own multi-faceted era of mixed sounds and places and experiences.

Addendum: For a detailed examination of the bands on Strange Passion, do check out Ian Maleney’s excellent piece over at The Quietus.