Nowhere Is The Place To Be 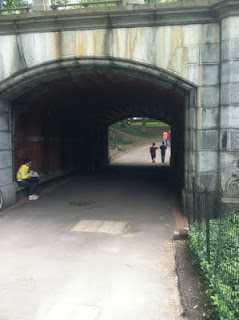 The concept of the void -emptiness, nothingness, ground cleared away entirely -made an interesting return in my life this week.
Philosopher Richard Kearney mentioned it last week during his chat at the Rubin Museum Of Art; together with philosopher Joseph Prabhu, he parsed the connections between Catholicism and Buddhism, bringing in his own experiences about being at a holy cave in India (one central to Hinduism), and confronting the inevitable “void within.” There was nothing, he said, that could’ve prepared him for being in such a dark, dreary place so entirely devoid of human contact and life. Seeing as he was on a pilgrimage, he’d planned to stay for two weeks, and had made the proper arrangements with local monks and authorities. As it was, he lasted three hours.
It’s scary to confront this aspect of ourselves, where the external concerns both overwhelm and fall away, and ther’es nothing familiar or comforting to cling to anymore. Kearney brought up the pertinent example of Jesus calling out on the cross, “Father, why have you forsaken me?“, drawing attention to the its perfect distillation of the concept of ‘void’, and what it means to confront that in order to move past it, and into a more meaningful existence. Experiencing this intense, intensely frightening, vast sense of inner emptiness and abandonment is, Kearney noted, a regular part of human experience; it doesn’t happen just once, and it shouldn’t. “Every day I die again and again and reborn…” Indeed.

This concept manifest into a hard reality after I left the talk, as news came about a potential job having fallen through. Encouragements aside (and I do thank every one of you who’ve sent them), it was, and remains hugely, painfully disappointing. Simply put, I don’t know how I’m going to stay in the Big Apple without paid work. That’s a hard reality, and a scary one to confront. Talk about staring into the void.
It’s true that the experience of making a new home for myself in New York City has provided several opportunities to stare into -indeed, fully steep in -my very own gaping, airless void, and to examine the relationships between spiritual, creative, and practical aspects of my life, integrating the muck of the past with the even muckier-muck of the present, and the absolutely blank, white-on-white question mark of the future. After Wednesday night, it feels like I’m embarking on a different kind of pilgrimage – searching for meaning, yes, earning a viable living, yes -but balancing that with all the colorful inspiration gained from writing in Soho, from meeting people like Edna O’Brien, from seeing the beautiful couples doing tango Union Square Sunday afternoons, from making inspiring new friends in old places, from small showings of kindness and the incredible vibrancy of living in a city where life can change in an instant.
I’ll definitely be returning to the Rubin for more thought-provoking talks, to see their upcoming exhibit about pilgrimage, to be illuminated by the kinds of ideas Kearney and Prabhu exchanged, and to sit and quietly examine the place where the void stops and life begins. Am I on the right track? Only time will tell – but I suppose it’s all part of the journey of making a life in the Big Apple.
caveEdna O'BrienJesusJoseph PrabhuNew YorkrebornreligionRichard KearneyRubin Museumsustenancethe void