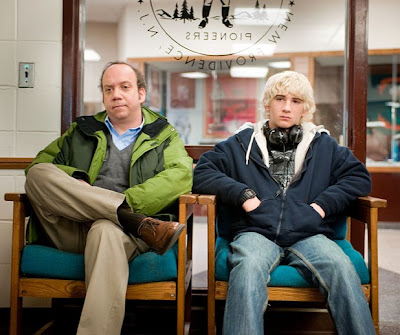 I didn’t know a thing about Win Win when I walked into the cinema to see it lastnight. I only knew it had award-winning actor Paul Giamatti as the lead, and it’s been popular with cinema-going New Yorkers who’s tried to get tickets, only to find screenings have sold out.

Lastnight wasn’t too crowded with people, but the film itself is chalk-full of ideas -and that corny old concept of heart. Except that in writer/director Thomas McCarthy‘s capable hands, it isn’t corny. He takes what could’ve easily been a very sentimental, schmaltzy concept and delivers with panache, subtlety, and a genuine human feeling for the characters and situations depicted.
Win Win is about a small-town lawyer who makes a morally heinous decision out of sheer financial desperation, and is forced to live with its consequences. McCarthy gently, if skillfully, weaves together twin themes of survival and family (and the connection therein) by offering an unflinchingly look at good, everyday people who say and do ugly, everyday things. The connection Giamatti’s character, Mike, shares with the young, sullen Kyle (Alex Schaffer) grows more complex, and yet clearer, with every scene. Mike doesn’t see his younger self in Kyle, so much as his current one; struggling against tough odds to find his place, he lashes out, does dumb things, and ultimately comes to understand the power of unconditional love and acceptance as a powerful agent for personal transformation.
The concept of “winning” is laced throughout the work: Kyle’s winning a wrestling match Mike and his friends are coaching, Mike winning in court, both of them winning against the odds. Mike ultimately wins in the end, and Kyle ultimately wins in the end (and Mike’s family, who play a major role throughout the film, win too) – but that win comes with huge compromises. Mike does the very thing he said he wouldn’t do for income; Kyle is estranged from his mother (even if that’s probably a plus), and Mike’s family is placed with the twin challenges of him not being there much, and taking care of both a newcomer and his relative. Winning? Hell yes. No one said life was perfect -but it is always full of possibilities for growth, even (or especially) through the lean times.
I thought about this concept of “winning” riding home on the subway, amidst squeaky breaks and the inevitable announcements from desperate people looking for spare change. Who’s really “winning” in this land of plenty? The notion is, for me (and I write this as a totally uncompetitive person), more about doing “whatever the f*ck it takes” (to quote a line from the movie) and less about demolishing your opponent; it’s about your rise, not another’s descent. It’s about understanding what losing is, too. You can’t understand the sweet taste of a win without knowing the acrid, bitter taste of loss. I had the good fortune of recently winning a few sets of tickets to various cultural happenings around New York, which has been cheering. I didn’t necessarily have to “beat” anyone to do it -it was random luck-of-the-draw -but there’s always a victor, and its opposite. One doesn’t -can’t -exist without the other. 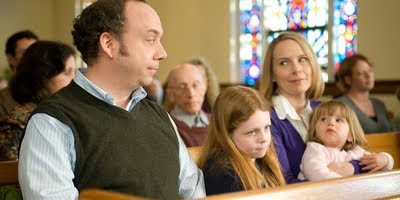 McCarthy deftly demonstrates this in a short scene in Win Win, where he shows Mike’s friend Terry (Bobby Cannavale) sitting glumly outside what was once his house, where his ex-wife now lives with a local handyman.
“It’s MY house!” he barks at Mike over the phone, after his friend chides him for his obsession. Oh, but it’s hard to let go of the old and the comfortable, even that world has turned hideous and strange.
Living in New York is teaching me to embrace winning and losing, and to understand there’s more to both (and its respective outcomes) than meets the eye. Some days are all about one, some days, the other, and that’s probably how it should be, though it’s sometimes hard to accept. Will we play dirty? Throw our opponent against the floor with reckless fury? Allow our reactions to rule our better sense? Walking away from Win Win, it occurred to me that it’s how we wrestle with winning and losing -and our ideas around both – in our daily lives that matters. Acceptance exists, as Win Win reminded me, it’s just a question of embracing it -and understanding that living that win is probably a whole lot different than we could’ve ever imagined.
familylosingmoviePaul GiamattiThomas McCarthyvictorWin Winwinningwrestling

On Bill The Quill