The rain started in light spurts when I got off the subway Tuesday night. Fast-gathering clouds leaned down on an glassy towers and old concrete masses alike with bullying persistence. People glanced up nervously at the sky as they scurried along the sidewalks like nervous beetles. I’d just turned on Peter Gabriel’s beautiful cover of Elbow’s “Mirrorball” on my iPod and was wondering if anyone could hear the magnificent genius that was ringing, bell-like, in my ears. The track is taken from his gorgeously poetic album of covers, Scratch My Back, released in February through Virgin Music. The album contains a myriad of thoughtful, sometimes surprising cover versions, including Lou Reed’s sigh-worthy “The Power Of The Heart” (his proposal to now-wife Laurie Anderson), Paul Simon’s “Boy In The Bubble”, as well as David Bowie’s much-loved “Heroes”. The album is fast becoming a favorite on my iPod. It’s a million miles away from the noisy, posturing, abrasive world of modern pop. It’s not exactly get-up-and-boogie music, but rather, sit-down-and-shut-up music -and I like that. I wish more of that genre existed. 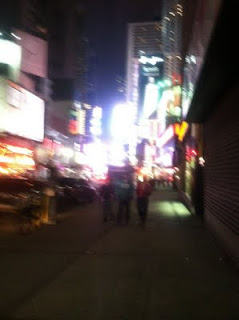 Far from being the bleeping, bloopy, busy electro-pop sound Gabriel became known for in the 1980s, Scratch My Back features minimalist production, a quality that immediately caught my attention. It’s very dramatic for its lack of instrumentation, and its careful consideration of orchestration in the way of what to put, and where. “Mirrorball” is a stand-out for its phenomenal string arrangements from Guy Garvey that, to quote Gabriel himself, “use all the colours of the orchestra to provide the heart, passion, intensity and groove” that lay dormant, if vibrantly alive, within the Elbow original. It does sound like Stravinsky -and Eno, and opera, prayer, incantation, invocation, moan and shudder, all at once. Upon first listen, walking through the ever-dampening, rapidly-darkening street in a New York borough, I wanted to weep, laugh, run, and stand still, all at once. Gabriel’s knowing, intimate delivery offers a beautiful, world-weary understanding of life and its variance. This begs for a video made in New York, complete with the huge, white flash of light and earth-shaking eruption of thunder that greeted its end the evening I listened to it.
A dramatic, magical end for a beautiful piece of art. New York was listening in.
Everything has changed. Indeed.
Photo taken from my Flickr photostream.
a-ha momentcoverElbowiPodminimalist production versionMirrorballNew YorkPeter GabrielScratch My Backstring arrangementssubwaysynchronicitythunder